Last weekend I ventured up to Canada...again...this time to see my client and friend Freddie Smalls compete in the Toronto Pro show.

Because I am a moron, somehow I booked my flight into Kitchener, rather than Toronto.  I think I checked the "airports nearby" box without knowing and ended up selecting Kitchener as my arrival destination instead of Toronto.  Even more moronic, I once again took the 6 a.m. departure flight.  So I had to be up before 4 a.m.  Which always sucks.

When I woke, I had messages from my best friend Swede, who had a story to tell me that was so hilarious I spit my coffee out all over the kitchen, and was in tears about it for about 10 minutes.  This is relevant to the rest of the morning.

It's been raining like mad here for weeks.  Day and night.  If you know anything about Kansas weather you will know this is how the seasons work....

Springtime - It rains nonstop.  This occurs most of spring.
Summer - The rain stops.  And it's hot as fuck.
Fall - Two weeks of fall are awesome.  Then it starts raining, much like spring.
Winter - The rain stops, and it's cold as fuck.

On this morning, it was raining only in a way that I imagined it rained when Noah was building that Ark.  To make matters worse, I was still laughing uncontrollable over the story.

I get to the airport, with what I believe is plenty of time.  More than an hour and fifteen minutes before my flight departs.  Upon entering the building, I come to the conclusion that they are giving away something everyone really wants; like money or sex toys because I've never seen the airport that busy.

It took so long to check in that as I was standing in the security line they started calling my name over the intercom, as the flight was going to depart any minute.  I was terribly irritated at this point because I hate crowds and I really hate slow people, and I had a lot of them in front of me.  By that I mean, I could see that people getting through security were taking their sweet ass time in getting their shoes off, and their personal items into the plastic bins.

When I finally got through security I ran to my gate and they were literally getting ready to close the doors.  So I did make it, fortunately.

Once I finally got seated and was able to relax.  I started laughing again.  So much so, that the guy sitting next to me became a bit annoyed and upset, as I was not looking at my phone or any electronic device.  I didn't want to explain to him what I was laughing about, because it was rather crass and sexual in nature.  This of course, made me laugh harder, and he actually asked the flight attendant to move him to a new seat.

This made me laugh even harder.

Soon the flight attendant came to me, smiling, and asked if everything was ok.  This caused me to ruminate on the story even more, and I could barely breathe at this point.  I finally gathered myself to inform her that I was fine, but that I had had something very funny happen to me on the way in and I was just now "dealing with it".

She laughed somewhat nervously and said "no problem.  Enjoy your flight."

I flew into Chicago, where I had a longer layover than usual.  About 4 hours.  I grabbed some food and sat down and checked my emails.  As it came closer to my next departure, I found my gate and sat down.  A few minutes later my area was swarmed by a group of Asian people who decided they would have a picnic right then and there.

One of them pulled out a god damn knife....yes a knife, and started peeling an apple.  He cut it up and passed the slices around to the rest of the group.  Soon, they all pulled out paper bags that contained various nuts and fruit and were chowing down.

From Chicago I finally landed in Kitchener.  Which is more than an hour away from Toronto.  I took a Taxi, for $200, into Toronto.

That evening I met with Freddie and had dinner.  At the end of dinner, Fred gets up and goes "come to the bathroom with me."

I thought this was only something that females did, but apparently on this night, the men would head into the bathroom.

Freddie stripped down to his underwear right there to show me his conditioning.  And by "conditioning" I mean the kind of shape he was in.  This is not code for his weiner.  Ok?

Nevertheless, in my mind as I was laughing again as there were people in the restroom that clearly were befuddled by some jacked dude taking his clothes off in the bathroom to hit some poses.

He looked ready, but I told him he might need to harden up a bit.  I felt like he had just a tad bit of water he needed to shed, and he agreed.  Not a lot, just very little.  However, I don't handle that part of his show prep (George Farah does), so I told him it was just my opinion.  George is obviously very good at what he does, so that's his area. 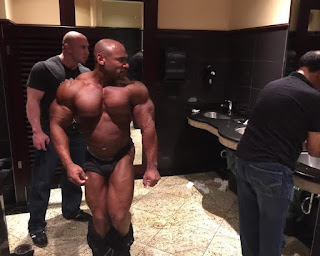 The next day I went to the expo there, and had to pleasure of meeting several people who follow me and read my nonsense.  It's always humbling and an honor when someone tells me they read my stuff, or follow my work and I'm incredibly appreciate of those words.  So I always appreciate when someone goes out of their way to say hi.  To those that did, thank you for your support.  I really appreciate it.

That night the show kicked off, bodybuilding happened, Freddie took third.  I had him in the top two, but there are some politics in bodybuilding so it comes with the territory.

After the show I ran into Ben Pakulski, and we shot the shit for a while and made plans to meet up later.  When I finally met up with Fred after the show he said "you're not disappointed in me are you?"

"Hell no.  I think you should have at least been a spot higher.   But that's not your fault.  These things happen in this industry."

I asked him why he was so happy.

"Man, the improvements I've had since we've been working together have me stoked.  I feel like I could finally stand on stage and not feel so small next to everyone else.  And to me, that was a big win."

So long as Fred is happy, then that's all that matters to me as his coach.

We grabbed dinner that evening and celebrated the event.  Freddie picked up the entire dinner tab, which was very gracious of him seeing how we all had "starters", then the main course, and two desserts.

The next morning Ben and I met for breakfast.  Unfortunately I realized I left my phone in the cab, so we had to call the cab company to let the driver know my phone was in his car (I tried calling it several times but no answer).  The cab driver swung back around a bit later, letting me know he had made several rounds around the block trying to find me to give my phone back to me.  Always nice to know there are still good, honest people left in the world.

Ben and I ate and talked shop for a long time.  I don't care what shit you've read about him on the net, the guy is smart and knows his shit.  And I mean very well.  One of the most intelligent and articulate dudes I've been around in a long time in regards to training and nutritional stuff.  It was a great convo, and I hope to spend some more time with Ben in the future sharing knowledge. 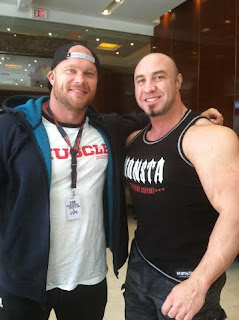 I left the next morning, with no hiccups like I had when I was traveling in.  Thankfully.

Oh I did sit next to some dickhead who didn't like the fact that my shoulders take up part of his seat.  This isn't something I can help but he kept trying to body check my elbow on the elbow rest, and after about the third time I looked at him like "cut it fuck out".  He ceased this behavior at this point.

Overall it was a great trip, and a great experience.  I could be coming back to Canada in September for some seminar work.

Thanks to everyone for reading my nonsense.

Follow LRB on IG - http://instagram.com/liftrunbang
Posted by Paul Carter at 10:10 AM