Anytime the talk of particular age and nutritional habits come up, there's usually that ONE PERSON that chimes in with the fact that their grand-pa is 184 years old, and smokes 2 packs of camel a day and lives by drinking a gallon of bacon grease each day and eats a pound of hot dogs and is "in perfect health".

To me, the short circuit in this argument has always been obvious.

You're talking about someone that grew up in a totally different era, in a different way of life, and set a standard of health via different means than the people living now, who are either dying at a far younger age, or if they do live as long the quality of life is much lower.


According to research led by Christopher Murray, director of the Institute for Health Metrics and Evaluation at the University of Washington in Seattle, Americans often have to cope with a range of medical problems during those extra years of life.

They are "not necessarily in good health", he told the Wall Street Journal.

Obesity, diabetes, kidney disease and neurological conditions like Alzheimer's are all on the rise, both in the US and in much of the developed world.

So while we can expect extra years, they may not necessarily be golden - which is itself a good reason to stay away from the pies.

However, the New England Journal of Medicine, which is made up of kinda smart people, actually don't even agree we're living longer.  As far back as 2005, they were already sizing up the fact that we are scheduled to check out earlier than most of our parents will.


For the first time in two centuries, the current generation of children in America may have shorter life expectancies than their parents, according to a new report, which contends that the rapid rise in childhood obesity, if left unchecked, could shorten life spans by as much as five years.

The report, to be published Thursday in The New England Journal of Medicine, says the prevalence and severity of obesity is so great, especially in children, that the associated diseases and complications -- Type 2 diabetes, heart disease, kidney failure, cancer -- are likely to strike people at younger and younger ages.

People can debate about the actual numbers until the cows come home, but you really do not have to be a scientist or researcher to understand that technology has changed our way of life in first world countries.

My dad is now 75 years old.  He grew up walking to school, then would come to work all day in the garden where his parents grew most of the food they ate.  They spent the winters hunting deer, and the summers fishing and working in the fields.  I think he had 4 thousand brothers and sisters, so it was basically a sweat shop for farming, hunting, and fishing.  But that's how a lot of families lived back then.

My dad is currently around 6' and 230 pounds.  So he's not thin.  But his health is pretty darn good.  So I will be that guy.  My dad still eats like shit, and is overweight, but his health is good (watch his heart explode through his chest next week like something out of Aliens after I write this) and he's still exceptionally active.   He still works his own garden, he still hunts all winter, still goes fishing, and up until just a few years ago, he was still officiating baseball, football, volleyball, and softball games all year.  That's on two knee replacements as well.

The point is, our parents or our grandparents grew up in a time where they usually established a work ethic that became a part of their daily life.  My grandmother is still alive, 96 years old, and she still tills her own garden.  She's thinner than an ironing board, but her brain is still sharp and she's still spunky.  She might eat once or twice a day, and it's usually from her garden and livestock she has raised or someone else brought to her for meat.

When you parallel that to the generation of kids growing up now, it might as well be like they are being raised on a completely different planet.

Kids go home now to Xbox1, play on their computers or iPhones all day, get very little time to exercise at school, and have a high level of access to calorie dense low-nutrient foods.

But I don't even need to go back to my parents or grandparents time in order to draw such a strong contrast.

I grew up riding my bike all summer.  Playing tackle football (without pads), pick up baseball and basketball games, and going hiking through the woods with friends.  We ate what we wanted and as much as we wanted, and still usually stayed pretty scrawny.  I miss those days.

We didn't have access to a McDonald's and we didn't drink 1,000 calorie "coffees" from any franchise because they didn't exist.  We drank Coke here and there, ate tons of sammiches, and generally every night most of us went home to a family that cooked a very large, complete dinner that usually consisted of beef, chicken, pork, along with tons of veggies, rice, or potatoes.

I've written a lot about obesity here, and sometimes it has caused a ruckus and sometimes....no it still did each time.

But the fact is, society actually makes it more difficult on a lot of levels to not be obese, despite the fact that there is a constant outcry to get the obesity problem under control.

First off, despite the fact that we are currently living in a time where crime is basically at its lowest, people are scared as shit to let their kids go outside and play alone.  Growing up, during the summer the street in front of my house was like a virtual parade of kids all summer who were on their way to "play" or just "do stuff".

The street in front of my house today?  I never see anyone, despite the fact that I know there are lots of families with kids in the 8 to 15 year old age range.  Sometimes I will see a few kids here and there that are forced to ride their bike in a 12 by 12 foot area in front of the house, lest they get kid napped immediately by the thousands of predators just waiting to throw little Johnnie into the trunk.

I'm not minimizing anyone's pain that has lost a child to abduction here.  I cannot imagine what that would feel like.  However, the odds of your child being abducted by a stranger are about....1 in 610,000.

This doesn't stop the fear mongering, however.  On my own facebook wall I've had parents chime in with the fact that they basically don't let their kids out of their sight for any reason ever.  And while I commend them for being responsible, in some ways helicopter parenting could be contributing to the obesity problem.

I'll tie all this together, so just hang in there with me.

Recent studies have painted a grim picture of the American working world: Longer days, less vacation time, and later retirement, and — and that was all during the good years of the 1990s.

The last few months have done nothing to ease those conditions, adding job insecurity to the mix as an increasing number of companies lay off workers to "downsize" in the slumping economy.

Those lucky enough to still have a job can expect to be asked to do more, to make up for the "streamlined" workforce.
Not only are Americans working longer hours than at any time since statistics have been kept, but now they are also working longer than anyone else in the industrialized world. And while workers in other countries have been seeing their hours cut back by legislation focused on preventing work from infringing on private life, Americans have been going in the other direction.

Nowadays, most kids are victims to convenience of use.  In other words, its far easier for the parent(s) to make something quick and easy for dinner, rather than actually cook a well balanced meal for the family each evening.  To add to that, because people are often working more hours and are still scraping by, food selection will often be of the cheapest variety.  Lots of processed foods and heat up dinners and pizzas can be the regular in most homes every night.

Kids are now overburdened with mounds of homework, because apparently that's how you make them smarter.

A Stanford researcher has found that students in high-achieving communities who spend too much time on homework experience more stress, physical health problems, a lack of balance, and alienation from society.

So actually, it looks like schools are in fact doing a great job of teaching kids what life as an adult will really be like.  Too much stress, too much work, not enough time to enjoy family, socialize normally, and grow into a well rounded individual.

I see this at expos and events I go to, where I've met people with hundreds of thousands of followers who seem perfectly normal posting online, but are socially awkward in person.

But I'm getting off track here with that.

Right now, there's no one single answer to fixing the problem of obesity in America.  It would require a massive social and ideological shift in order for change to happen.

Jobs would need to stop asking for 50+ hour weeks.  A huge emphasis on the importance of the nuclear family would have to be put at the forefront again (buh bye feminism), kids would need more time for activity both at school, and at home where parents would need to stop hovering over them and being overly protective.  In other words, they would need to be allowed to go outside and play unsupervised.  I know, that's crazy talk but that's how normal people used to grow up. 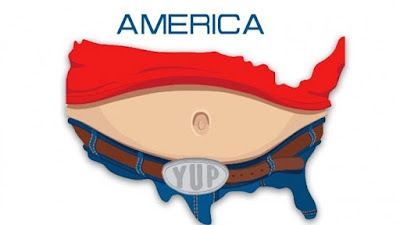 And emphasis on educating about food would need to be made starting at a young age by qualified individuals.  I'm against making franchises change their menu because that's wrong to me.  I'm about educating people so that they can make better choices.

Basically, we'd need to revisit our past in some ways and think that maybe our grandparents and great grandparents generation lived as long as they have because of the dynamics they grew up in, were pretty simple.  You moved a lot, you played a lot, you worked a physical job, you went to Church on Sunday, you ate highly nutritious foods, you let your kids run around the neighborhood, and you didn't spend 30+ hours a week watching TV.

There's really no simple answer here because the complexities in "solving" the obesity problem isn't singular by any means.  It's complicated and layered in problems all the way from food selection to social habits to work, school, and family.

I don't have an answer to be honest.  Education can only solve so much.

American needs a bit of a reboot button if it wants to fix this particular issue.  It's not a single issue vote.  And I don't think as a society, as a whole, we're going to be willing to push that particular button.  At least, not right now.