Injuries suck.  I love opening with a provocatively obvious statement right out of the gate.

Oh let me add, being sick also sucks.  I mean when you're really sick with the flu, or some type of bronchitis that makes daily living outright miserable.

None of this is news, of course.  I'm stating the obvious for a reason as a vehicle for the rest of this article.

What is it that we do when we are injured?  We train around it.  We rehab.  We compress it and elevate it, some people even still apply ice (groan).  In other words, we do all the things to manage dealing with it until said injury is healed.

When we are sick, we often medicate ourselves.  We take some off the shelf coma inducing elixir to help us manage the aches and pains, and numb us down as much as possible until it runs its course.

The commonality here is that we do things to manage illness and injury until it subsides, and we can resume feeling good again, or at least normal.  Because that's the goal.  Not to be in pain.  Not to feel sick.  Not to be injured.  And the best part of that, is once it does subside is that we are exceptionally appreciative to not be in pain anymore.  To not be coughing a lung out all day, each day.  To not feel like hammered shit.

I remember the night I drove myself to the emergency room in severe stomach pain that had been going on for a few days.  I had tried everything I could think of to relieve it.  Tums, ibuprofen, gas medicine, pepto.  Hell, I even made myself throw up, because I thought maybe I had something in my stomach that wouldn't come out either end and that if I "got it out", that I would feel better.  No such luck.

It was around 2 a.m. that it hit me, to test something out.  I pushed in on the lower right side of my abdomen, and then quickly let off and pain shot through my body like I had been hit by a lightening bolt.  Right then I realized the severity of my situation and I drove to the ER.

That night they wheeled me into emergency surgery and removed my appendix.

I awoke over a day later burning up with fever, that plagued me for a few days.  The pain was enervating.  On the third day my surgeon came in and told me that had I waited a few more hours that most likely I would have died.  I had obviously put my pain aside by "managing" and the infection from the rupture had spread into my body.

Luckily (probably to the dismay of some), I did survive.  But the experience did give me pause for thought, as my father called me while in the hospital and said "son, don't you think maybe you need to do a better job of assessing your pain management?"

His words weren't lost on me, as since then I've tried to not play the role of ultimate macho man, and understand that gutting everything out (in that case, literally) isn't always the best idea, and actually taking care of myself is kinda important.  Because I don't have an extra body lying around I can climb into if this one goes to hell in a hand basket.

All of this sort of hit me the other day as I was driving around running errands and rummaging through my thoughts.

I had gotten off the phone with my best friend and the conversation had left me feeling pretty awesome.  We laughed about a bunch of silly shit, and made fun of each other as we often do.  Then I set out to do my adulting for the day.

The levity from the conversation actually opened my eyes to the fact that, I realized I had mostly been "managing" a lot of shit in my life.  And management can be a good thing.  We are mostly required to manage shit throughout the day.  That's what adulting largely is.  You could easily interchange the terms coping with managing, I think.  You have a checklist of things to do, and you need to do them for the day.  Fair enough.

We get to infuse those moments of levity so infrequently because we spend so much time managing the uncomfortable life we live in.  It's our fault.  It really is.  After all, we created it.  We teach the people we hold closest to us how to treat us.  Because we allow it.  We tolerate it.  Then we develop coping mechanisms that enable us to become comfortable in the discontent of it all.  We emotionally medicate and numb ourselves down so we can "manage" our life.  And at that point, we're not really alive.  We're just breathing.

The awareness of such often happens in these epiphanies where levity removes our injuries, illnesses, having to perform pain management.  Our eyes become opened to just how much pain management we've been doing.  I've sat across tables from people I loved who I knew had immersed themselves so heavily in pain management that they had climbed the ladder to pain CEO levels.  Outwardly, to most people, they were doing just fine.  They had their shit together.  They knew how to smile through the pain and had a life that from all appearances, looked "normal".  And that word right there, normal, I don't even know what that means anymore because I don't really know of anyone that isn't consistently waging some battle in their life that incarcerates and shackles their joy in some way.

I'm not saying our life should be Disney land everyday.  Nor should it be.  How are you ever going to have periods of personal growth if you don't walk through some suffrage?

Pressure is the catalyst for growth.  Change doesn't often happen until the pain of staying the same outweighs the fear of change.

My realization during that drive was that, most often something happens that gives us that moment of levity that provides contrast to just how much pain management we've been doing, or we hit a breaking point where we can no longer manage the discomfort, and something must change.

The worst part of this actualization is we see how much in our life we've been "managing".  You find yourself saying "I thought I was doing ok."  Then realize that well, you haven't been.  And those movements are either the launching pad for the initiation of change in our life, or we wake up everyday with far more clarity about just how much our life doesn't look like what we desire it to be, but succumb to simply "dealing with it".

I am totally down for adhering to the mantra that we should wake up each day and be thankful for so many of the things we do have in our life that are genuine blessings.  Somewhere this morning someone is praying over their child who is fighting a battle with cancer.  And you're not that person.

Somewhere this morning, someone is trying to figure out where their next meal will come from.  And  you're not that person.

The mindset of minimizing your own grief is an awesome way to make sure you don't seize a life you'd be much happier and more productive in.  Because then you rationalize with that old and tired cliche that "it could be worse."  Yes, and as noted, you could be dead.  But if you're reading this, you're not.

It often requires overcoming fears that are rooted in the unknown.  So we don't change our life because we're afraid of change, and failure, and ridicule, and ostracizing, and thus we say "I CAN live this way."

I CAN eat dog food and survive, but I probably won't be very fulfilled and happy in doing so.  Not only that, dog food is designed for dogs.  I'd probably be better off eating food humans should be eating.  Even more, I'd probably feel better making food selections that improve my quality of health and well being.

If your "life diet" has been Alpo, then after eating it day after day after day, you'd eventually just adjust to the fact that "hey, this is what I eat.  And you know what?  It could be worse.  I could be starving."

Yes, and starving people...if they keep starving, eventually die.  And at some point, you'll either grow tired of eating the dog food, and starve to death, or you'll get a taste of food that is fit for human consumption and decide that "I don't have to eat this dog food shit each day."

I know, that's really deep right there - dog food and all.  I'm like a modern day Socrates with this shit, but I think you probably understand the spirit of it all.

The actual real life newsflash here is this - moving out of the pain management zone often requires one change.  Just one.  Not four.  Not three.  Not twelve.  Not four hundred.  It's the one.

Yes that one often means a lot of decisions and changes that will domino afterwards, but I can tell you this - a huge part of excellence in our life is mustering up the courage to bring issues we need deal with to the forefront of our life, and make a choice about them.  When we don't, we are left with alternatives that we haven't chosen for ourselves.  Paraphrasing from Bonhoeffer.

And that is often the predicament that leaves us managing.  Because now we are coping with a life that has been created through situations that we didn't choose.  That we didn't really want.  That don't allow us to wake up with that overriding sense of consistent levity that truthfully, we all more or less desire.  So we cope.  And we say "I am doing ok.  Yes, that milkbone is just fine."

When my appendix ruptured, I had a choice.  To sit in my house and die a slow and agonizing death.  Or to drive to the emergency room and get help.  I chose to help myself.  That meant getting cut open, and having parts removed from me that were causing my pain, and would eventually lead to my demise.  I had to make one decision in order to live.  Drive myself to the hospital. 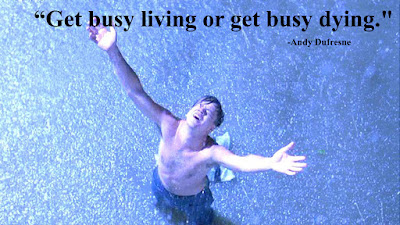 Life, for a lot of people can look a lot like that, but on a longer timeline.  They will suffer and live in pain, and find ways to manage.  All to avoid making a drive to a new destination where yes, they may get cut open, and have to recover from that on the other side of it all.  But afterwards can wake up each day without that nagging ache that doesn't require so much management.

"Get busy living, or get busy dying". -- Andy Dufresne