Why calories in versus calories out doesn't work

I'm even going to put a chicken breast pic in the preview so that it looks totally legit.  But keep reading.

To lose weight, you have to essentially move more and eat less. You have to have an energy deficit.  That's the end of the discussion. It really is. right?  It's all thermodynamics and energy in versus out and blah blah blah blah blah.

That's all it is, right?

If we lived in a vacuum, like a bunch of rats in test tubes and this could all be compartmentalized, then all of that would be correct. But we don't. There's something called the human condition - dealing with people and their life, their history, and their experiences that outweigh all of this drivel. If you don't understand that, then you don't know shit. I don't care how many studies you can cite or how many letters come after your name.

Losing weight is about calories in versus calories out.  Keeping it off, or maintaining the body composition you worked hard for, is an entirely different subject.

Knowledge has no power without application -

A few days ago someone said to me "you know more about relationships and all of that garbage than anyone I know. How to create healthy romantic relationships and whatnot. So why so many fuck ups in your own life?"

"Because my application sucks."

"Well, at least you're honest."

That's the truth. I could blame other people or circumstances without acknowledging my own involvement but I don't. I know my strong areas and my weak ones. My own application can at times, suck nuts. There it is. Now you know. And G.I. Joe told me knowing was half the battle.

But there's the other half. The more important half. Really, it's the only half that matters.  The application of what you know.  And existing within that half, is the applicable ability on a consistent basis.  That's what sustainability is.

Knowledge is not power. Knowledge is the metaphorical baseball in your hand. Application is your ability to throw a strike with it.  And just like learning how to throw strikes consistently, we have to practice the application of our knowledge on a consistent basis if we want to increase our chances for desired outcomes.  And that can't happen if we don't understand why it is we have trouble applying what it is we already know.

The flow chart goes likes this...

You put less food on your fork that goes into your mouth. You walk a little further today than you did yesterday.   You repeat this each day until you arrive at your goal.

Everyone knows these things. Everyone!

You know how to create a better relationship. You really do. No, I swear you do.  In no particular order...

1.  You spend some time understanding the needs of your partner, and they do the same for you.

2.  You make each other a priority.

3.  You learn how to listen to each other earnestly, and sincerely.

4.  You don't cheat when you've told him or her that you're in a committed relationship.

5.  You say "I'm sorry, what do I need to do to make this right?" when you screw up, then actually do what is required.

6.  You let some arguments go, because you realize there's no real "winning" when you hurt one another.

8.  You don't keep a scoreboard of wrongs.

9.  You forgive each other.

11.  You make sweet love as often as possible.

But it's still not really that difficult to know what the right thing(s) to do is/are.

The knowledge is not in some book that's locked away 10 floors under the Vatican in a room that only Nicolas Cage can unlock with a key made out of a dinosaur bones. Despite all of the articles and books I've written on the various forms of training and dietary witchcraft, the knowledge is quite simple.

1. Lift some weights.
2. Eat less.
3. Walk around a lot.
4. Repeat those three things for a long time and you'll look better.

Because they are people.

And people have stories. And experiences and baggage.  People don't live in test labs under controlled conditions where they are fed and exercised like mice and life doesn't happen.  They live in the real world where what they would like to be able to do, is often circumvented by painful experiences they haven't resolved yet.

"It's because they are weak and undisciplined."

Says the meathead who can't hold down a steady job because, "gym life".

Look, being able to eat chicken and broccoli six times a day and hit the gym twice before 6 P.M. doesn't make you some mental and emotional superhero from the town of Disciplineville.  Plenty of people I've known that can do this day in and day out are about as emotionally robust and evolved as a toddler in every other facet of their life.  People tend to be incredibly disciplined in certain areas of their life, and very undisciplined in others.

Discipline is not salad dressing.  It's not something we can slather all over every part of our life in equal degrees.  We generally have a few select areas of our life that we can be consistently disciplined in.  The rest of it often gets thrown together with whatever mental and emotional energy we have leftover after we're done doing what deem to be most important.

We tend to be very disciplined in areas that we feel the greatest amount of reward from.  Even if the reward is temporary and brings about negative consequences with on a consistent basis.

People don't fail in diet adherence because they are "weak minded".   People succumb to unhealthy coping mechanisms like binge eating because it offers a retreat from confronting the fragmented parts of their life that carries a lot of emotional pain and reminders.

I am fond of the saying "if you walk ten miles deep into the woods, you have to walk ten miles out."  I am fond of saying it because someone wrote it to me on social media once, and I liked it and have used it a few times.  So whoever did that, you're awesome.  Brofist.

In order to even begin the walk back out, we often have to come to an understanding of why we made the walk in. Why we didn't stop at mile four, or seven.

Hey it's my stolen metaphor and it only goes ten miles. That's what we're working with here, so don't ask "well why not five hundred miles like The Proclaimers song?"

Because they ended up walking a thousand miles because it was five hundred MORE. 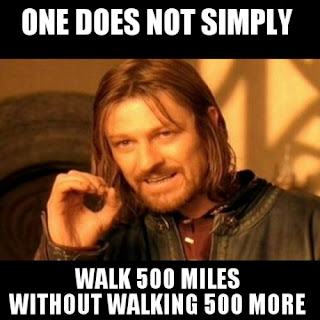 Years ago, I remember this bodybuilder who talked about how this fat kid wrote him a letter telling of how he dreamed everyday of being jacked, but lived in this state of despair because he had always been fat.  He wrote how he really wanted to go to the gym, but the thought of it brought about a great deal of anxiety so then he'd eat a whole loaf of peanut butter and jelly sandwiches and drink a gallon of chocolate milk to soothe that anxiety.

Luckily, the bodybuilder gave the kid some great advice.  He told him to start by just eating half a loaf of PBnJ, and to switch to 2% milk.  Certainly, he cut his calories down, but he did so in a way that was mentally and emotionally manageable.   He didn't tell him "get your fat ass to the gym, and eat egg whites and oatmeal."  Does this even seem logical?  It doesn't take a Sigmund Freud to figure out that the answer to this poor kid's desire to be jacked wasn't a training program or a special diet.

Telling the girl who is an emotional eater that finds solace and comfort in food in the middle of a depression that she "needs to eat less and move more" and "just shove some chicken and salad down your throat" is some real Einstein shit. Thanks for that newsflash from the city. Your people solving skills are exemplary.  She might need to deal with the underlying issues related to the depression that cause her to seek comfort foods first.  She might have to talk about the pain she had in growing up where she was bullied by other girls or ostracized for any number of reasons that girls do that to one another.

Or she may have to talk about how she eventually just accepted her obesity, and lost her identity in it.  That she ceased being "Nancy" or "Jane" or "Alice".  That she became "the fat girl".   Or even worse, THAT fat girl.

And you know where we continue to exist as adults if we don't confront all the demons that laid the framework for the fragmented parts of who we are?

In that fat kids mind.

In that bullied kids mind.

In that abused kids mind.

In that abandoned kids mind.

I was the skinny kid who lost his best friend in a motorcycle accident when he was 13.  Who suffered at the hands of some violent events that no kid should ever have to endure.  Who experienced being abandoned and saw the effects of substance abuse in people he loved and cared about.

My coping mechanism was the gym.  I desired to build as much muscle and strength as possible because having that exterior gave me something to hide behind.  It was my comfort food.  I was lucky that it wasn't drugs, or alcohol, or food (well, food was in there but only as a means to an end).  And over time, I was able to let go of the need for that exterior armor, and I started confronting all of the awful shit I had gone through that manifested in the way of shit decisions in my life.

In essence, people have to get their soul healthy first.  Before they can center themselves enough to get their body healthy. They have to have the discipline to heal their mind, to be strong enough to overcome the fears and pain that engulfed them when they were young.  Confronting those fears takes an infinitely greater degree of courage than eating some chicken breast and bench pressing.

Some will say it's not a coaches job to fix people. I don't disagree, but I also don't fully agree.

I can't fix anyone. I can barely fix myself half the time. And when I do fix myself, I often break the shit I just fixed from the day before. Now I'm exhausted. And most likely have hurt someone else's feelings in the process as well. Now I need to fix myself and make amends.  And I only have so much salad dressing to go around.

But we can't help someone if we don't understand the reasons for their ten mile walk. We can't help ourselves unless we do the same.  The changes we need to make in our lives are often inspired by how shitty we feel.  The paradox there is that the fear and pain of change keeps us from changing what makes us feel so shitty to begin with.

Changing your body, for a great many people, isn't about chicken breasts and contractions in the gym.  It's about flexing your emotions through the pain so that eventually you're strong enough to not need something anymore.  And when you realize you don't have a need for something in your life, then it no longer has any power over you.