LRB in the Dominican Republic

Back in October of 2014, I travelled up to Montreal to hang out and learn from my mentor, Charles Poliquin.  Charles and I have become close friends over the past year and it was a no brainer for me to make the trek up to Canada, aye, to finally meet him and hang out for 8 days.

Charles had a dude that was travelling with him for the Klokov/Poliquin tour named Juan Carlos, whom I met the first morning I finally met Charles.

I still laugh at meeting Juan, because upon initially meeting, he was very stoic, and intense.  Saying few words, and scowling most of the time.  Jolly, he was not.  Juan was from the Dominican Republic and talked like, well, Scarface.  When he did speak, I mean.  He sounded like Scarface.

At breakfast that morning Juan asked me, "you do seminars?"

"Ho-kay.  You come to Dominican Republic and do one."

That was it.  That was how this all got settled.  Twelve words.

Over the next four days however, Juan loosened up dramatically and as it turns out, he's actually very funny and like most of the Dominican people as I would find out, very personable.

Before he departed from Montreal he told me he was going to be in touch with me to get things set up for me to come out.  At first I was supposed to make the trek out right before Christmas, but the holidays made it too difficult to get everything together.  So we ended up settling for February.

I covered my arrival day in this blog post, so I will go over my time there, what I covered, and some misc stuff that made the trip pretty damn amazing.

First off I have to talk about Juan's place, Workout Gym.  It's in a mall, and is a really, really nice place.  I also have to talk about the type of people that train there.  It's mainly a bodybuilding gym.  So most of the guys there are into training to get bigger, which is fine, but I would be selling them on training for strength, and why that was important as well. 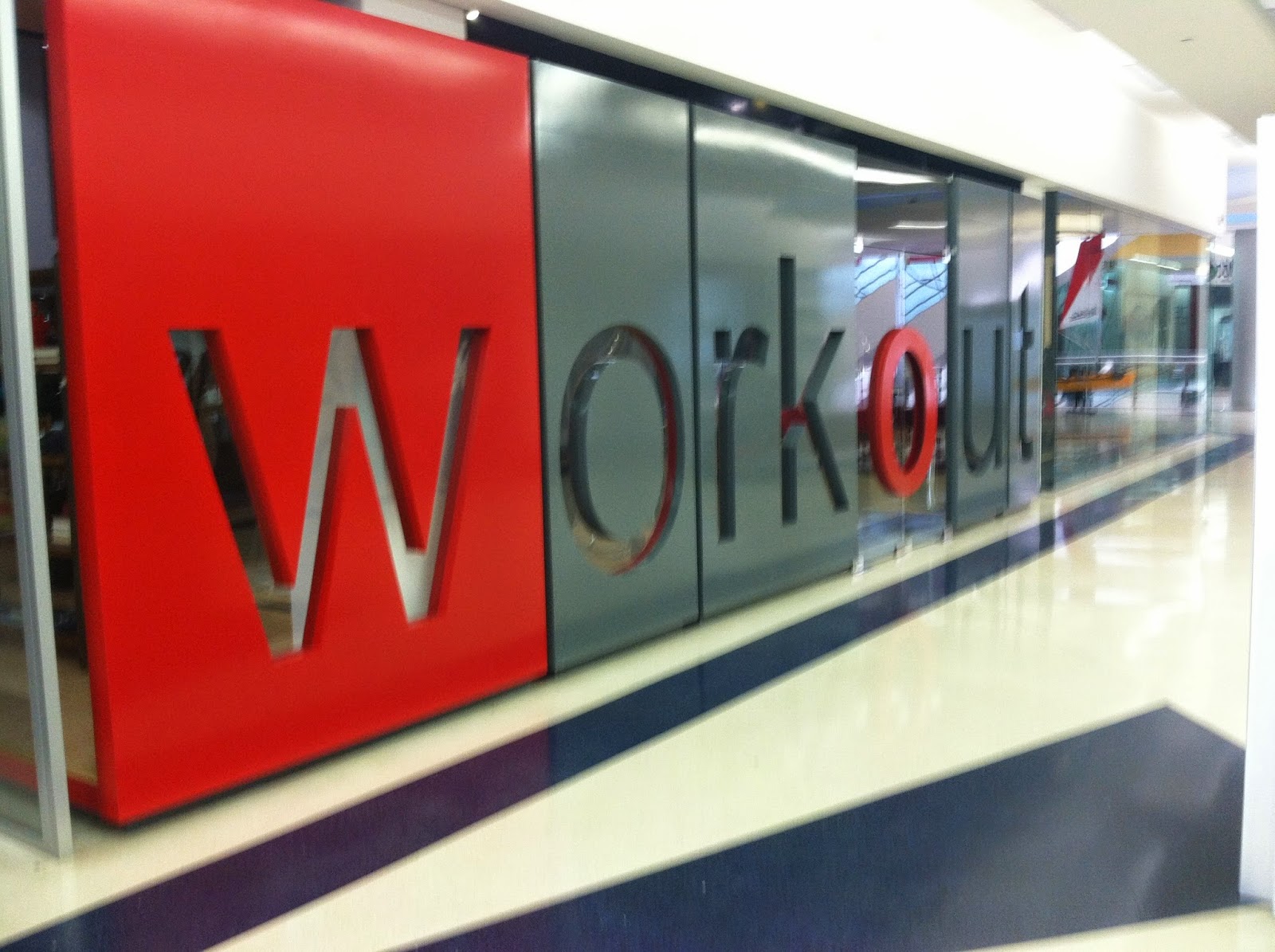 And speaking of translating, did I mention that none of the people attending spoke English?  Or let me say, most of them didn't, and the ones that did spoke very little of it.

This threw me for a loop on my first day, as I would be working with a translator, and to say it made day 1 more stressful than usual would be quite the understatement.

But back to the gym for a moment.

Juan has a really awesome place.  He has dumbbells that go up to 150+ pounds, but the catch here is, they are ALL thick handle dumbbells.  All of them. 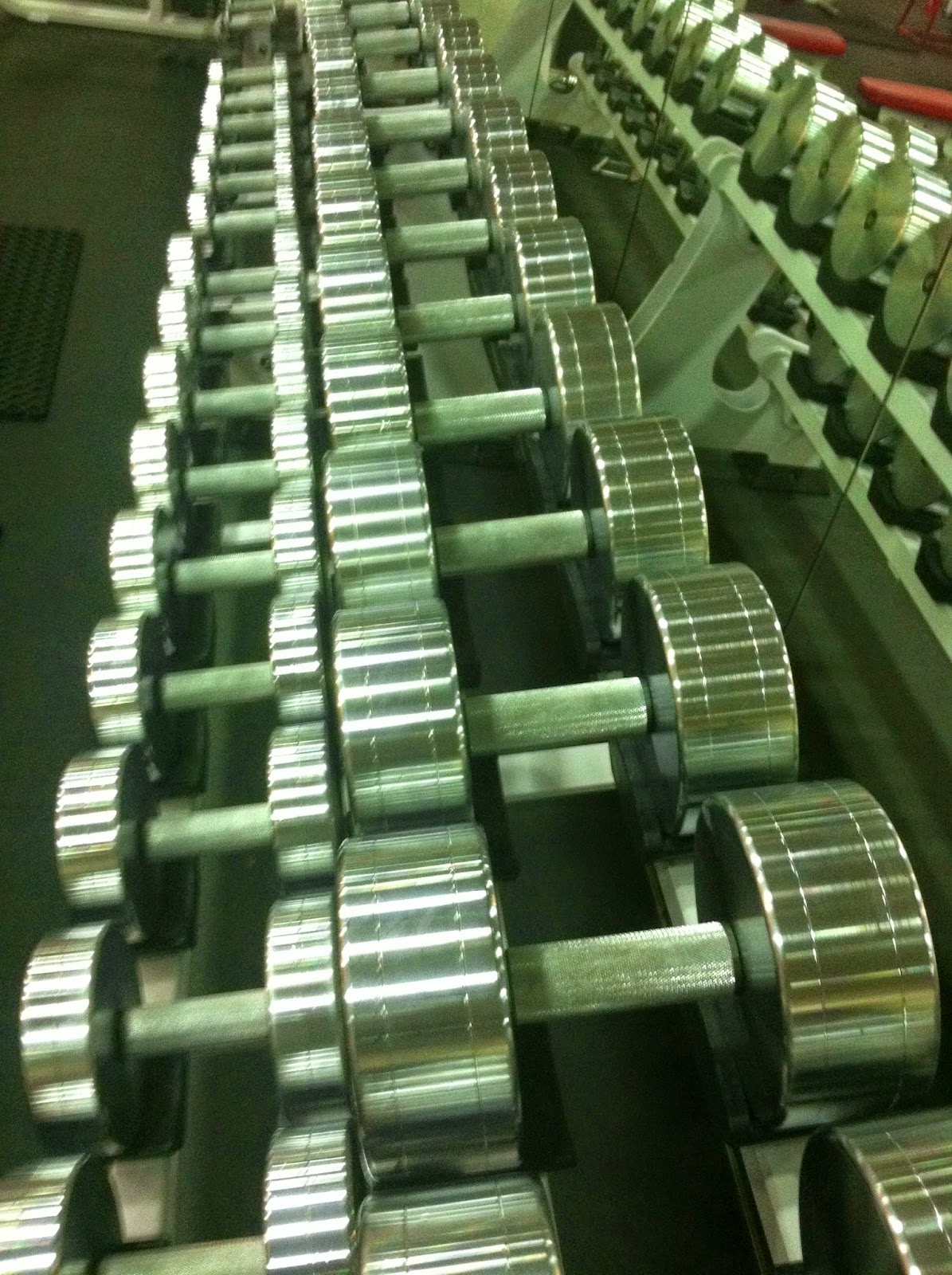 As I lectured I was often interrupted (by this one particular guy more often than not) and through his Spanish I could make out the word "hypertrophy" over and over again.  Basically, the gist of it was, how does any of this pertain to muscle growth?

To repeat, this is a gym mostly consisting of guys that do bodybuilding or men's physique competition.  So to them, I'm basically speaking a foreign language.  So technically, I was speaking two languages they didn't understand.

I knew it was of utmost importance that I get their "buy in" to what I was trying to talk to them about.  After all, if the people you are speaking to don't understand how what you are saying can apply to them, they will lose interest and not give a shit.

After lunch I came back and more or less sat down and explained to them why it was important, even for bodybuilders, to get stronger.  I asked them did they think I was bigger when I was moving 315 for 12 reps, or when I was moving 315 for 21 reps?  Of course they understood this.  I then explained that to move a weight for more reps, it needed to become a smaller percentage of their 1 rep max.

This helped with their buy in.

That afternoon we went over squatting.  A lot of them had been squatting with a lot of knee forward action, not hinging at the hips (try explain the word "hinge" in Spanish in regards to squatting).  Most of them did not understand how to get tight enough in the back (lots of elbow FORWARD action), and what to look at to know if the glutes were engaged properly.  Again, because it's mostly bodybuilding, they saw the squat as a movement to build the quads, rather than understanding how to distribute the load as much as possible across the lower body.  So they squatted in a very "bodybuilder" way.

This took a lot of correcting.

By the end of day 1 I was pretty fucking exhausted.  Two more days to go.

Because of how things went on day 1, I decided to change things up on day 2.  I would teach bench in the morning and then deadlifting after lunch.

For benching we went over bar path, wrist and elbow alignment, and of course, how to setup on the bench with enough tension and tightness, and how to facilitate leg drive.

Teaching leg drive is always interesting because some people get it right out of the gate, and some people don't seem to grasp it at all.  No matter how many different ways I teach it, or how many different mental cues I offer up, some people just can't "feel" what they are supposed to be doing.  Strangely enough, women seem to get leg drive faster than most guys.  I have no idea why, but in every seminar I've ever done this has been the case.

That afternoon we went over deadlifting.  I explained that the deadlift really wasn't a "pull", but more of a push, then a pull to finish at lockout.  I often say that the deadlift is the easiest lift to teach, but the hardest to "feel".  Getting the motion down of pushing the bar off the floor via your legs is something people do struggle with.  But once they get it, their deadlift starts flying.

I always tell people if your lower back gets sore from pulling, then you are "pulling" the entire movement.  It means the low back is what you are using to break inertia from the floor.  This is bad.

Once again, some people get this right away, and other struggle with it.  However it is, in my opinion, the single most key component to getting your deadlift to move if it has been stuck.  Once you learn how to do this, then the key from there is simply developing more leg strength to improve your strength/speed off the floor.

One thing I often like to do when I teach is actually let guys deadlift for the day.  It breaks up the monotony of just learning technique and gets the juices flowing to end the day on a fun note.

I haven't pulled since November.  Which was my meet.  I've done stiff legged deadlifts every other week or so, but no conventional deadlifts.  For fun I worked up to a super easy triple at 585 for the day, and another guy at the gym wanted to give it a go.  Video below.  Sorry for having it filmed on a potato.

By day 3 I had found my groove in regards to the language barrier.  It also seemed as if people brushed up on their English over the past two days because people were asking me questions in English or nodded at shit I said.  Maybe they were just humoring my by doing that, but they legit seemed to understand what I was saying more often now than before.


Last day I covered combining all the programming and how to lay it out in a training split, some rehab and prehab stuff, and then for fun we finished with 100 rep barbell curls.  As usual, I like to pit the women against the men because the men don't get that women are usually better at these because they tend to have more endurance fibers (regardless of what a "study" says I've seen this time after time). 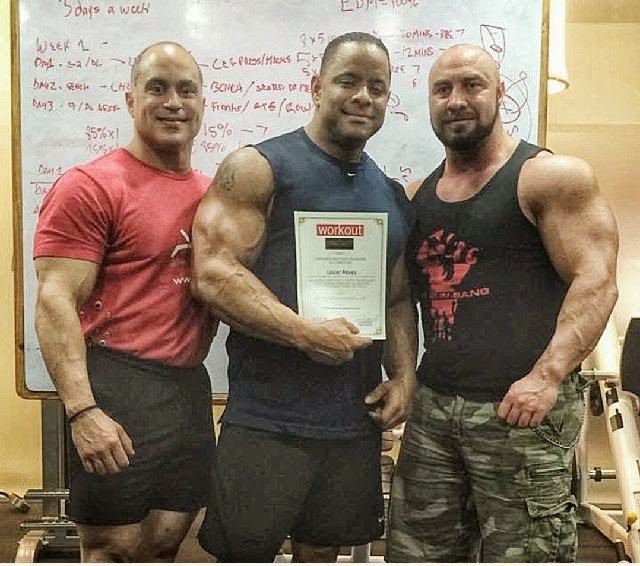 I went against Rocio, who is in her 50's, but jacked as fuck.  I knocked out the first 100 really fast, then thought she was well behind me so I ended up pausing for a bit, not realizing she just kept going.  I finished at 148....she did 160.  God dammit.

I can't say enough about Juan, his staff, his trainers and all the people that attended and the Dominican people in general.  They are loving and big hearted people who have a sense of hospitality that is unparalleled to anywhere I've been.  I am slated to return in June and am incredibly excited to get back, with more Spanish in tow, to do more teaching to the people there.

Now for some FUN stuff! 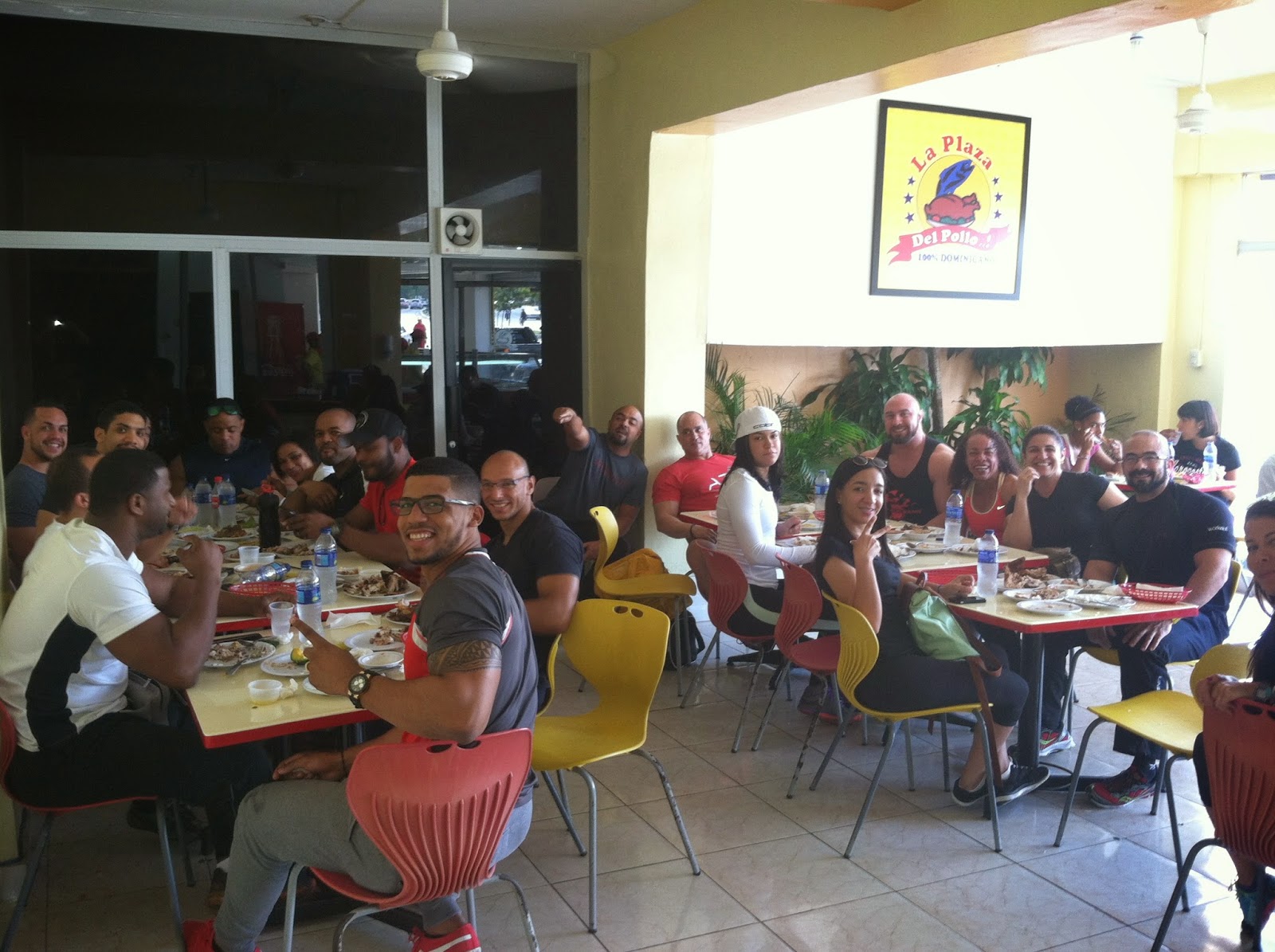 I have so many people I'd like to thank but I'm sure I will miss someone.  Thanks to Charles for introducing me to Juan.  Thanks to Juan for having me out, and spoiling me (he arranged for me to have a massage while there as well), having me into his home to meet his family and eat at their table with them.  Thanks to Alicia, Guillermo (who also translated and drove me around as needed, thank you sir!), Rocio, Natalia, and so many others who made my trip amazing and unforgettable.  I hope to see you all soon! 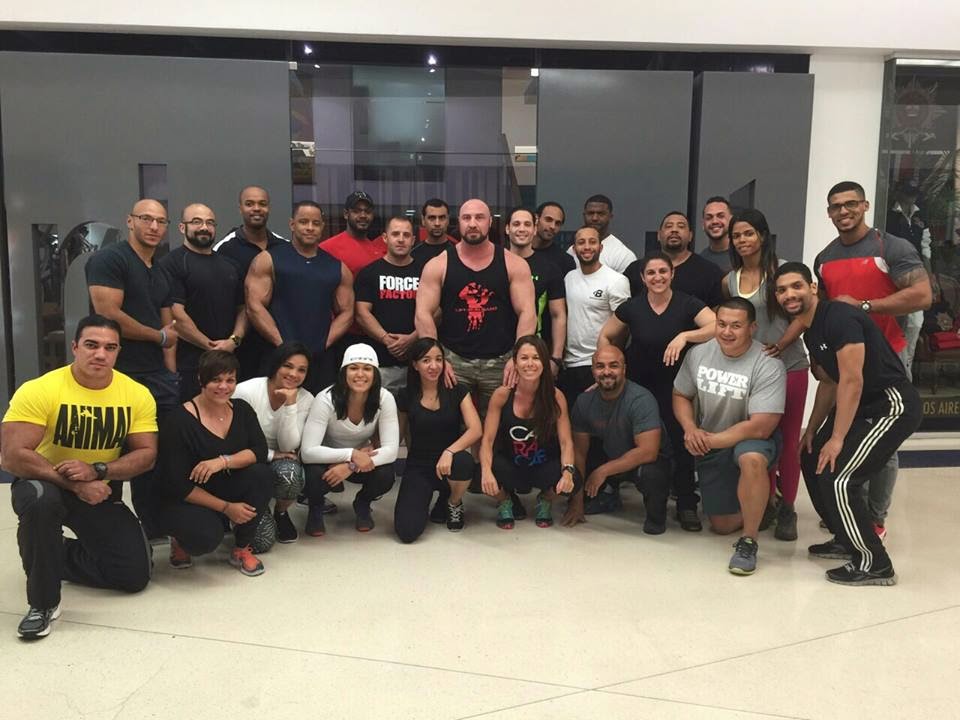 Follow LRB on IG - http://instagram.com/liftrunbang
Posted by Paul Carter at 10:04 AM