If your supplements cost more than groceries, you've already failed


This doesn't surprise me.  However I don't think there will be as much social sympathy for men as there is for women when it comes to eating disorders.  Society often tells us that it's unfair for us to project what we think beauty is onto women, yet as young boys we grow up watching cartoons and reading comics filled with characters so jacked that they look like they have been living off of a trenbolone IV bag since infancy.

Little girls get Barbie.  She has a small waist and big boobs.

Little boys get The Hulk and He-Man.  Two guys that can literally lift up mountains.

So many of the dudes I know that lift and train and aspire to be jacked, have a youth that is embedded in comic book culture.  And there aren't many comic book superheroes that don't make any former or current Mr. Olympia look like a Crossfit noob. 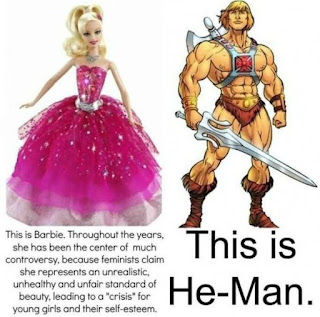 Those little boys, who spent all that time reading comics and playing with action figures that boast the same type of insane muscular development, often find their way into the gym just a few years later.

And as they say, "welcome to the gym.  Where you will forever be small."

Males often establish a pecking order amongst each other.  And make no mistake, in our youth the male with more strength and more muscular development is indeed more respected by his peers.  He gets more attention by the young ladies, the coaches, and even other parents.  As young men, we're all aware of this.

But unlike women, we don't complain about said pecking order.  We've always known it was the natural order of things, and instead of turning into social warrior crybabies we use it as the impetus to get better, bigger, stronger, faster, jacked, yoked, and awesome.

In other words, we accept this is a social norm.  We aren't running around trying to change society's standards for the "ultimate male physique".  We embrace that this is how things are, and work our asses off in order to garner the same amount of respect, notoriety, and affirmation from our peers that we have seen other jacked dudes get.

We want that.  Anyone who tells you otherwise is lying to you.  Otherwise, no one would give a shit about arm measurements or bench press numbers.  These things would be deemed insignificant and arbitrary.  But we all know they aren't.  We've made them significant because looking a certain way, or lifting a certain amount isn't JUST about impressing yourself.  Deep down, you absolutely desire the admiration of others for your hard work.

And the supplement industry knows this.  And preys on those desires and insecurities.  And anyone that tells you that men don't have the same, or similar insecurities about how they look is a fool.

The supplement industry is a tens of billions of dollars a year industry.  Anyone that has ever been to an expo knows it will be filled with booths trying to sell you their supplements.  And of course, those booths will be filled with dudes and women who possess exceptionally low bodyfat with an inordinate amount of muscle mass.  Well, sometimes.  This whole "aesthetics" movement have somehow made 185 pounds lean "hardcore bodybuilding".  Which is puzzling to me to say the least.

Nevertheless, that's what a lot of guys want.  And supplement companies are very aware of the market.  That's why certain physiques get pushed to the forefront, and get sponsored.  Because as young men, we looked to those physiques or the strength behind them, and had a supreme desire to attain that ourselves.  And the secret to getting said physique is of course, those god damn protein bars and powders and pre-workout vein exploders.

This has been going on for decades. This is not new.

When I was coming up through the 80's and 90's everything from Weider Mega Packs to dessicated liver to HMB was touted as that bridge that finally existed between your pre-pubescent boy tits to Arnold man pecs.

The chasm could now be narrowed.

Page after page of before and after pics, showing some incredible transformation gave us hope that finally, someone somewhere in a lab took pity on our meager male existence and decided enough was enough.

They made a supplement that would cause all of our comic book hero physiques to finally manifest itself in just a few weeks on this shit.

Shit was even called "steroid replacements" back in the day.  Yes, your mix of water soluble vitamins that turned my next piss into something that looked like Luke Skywalker's light saber was indeed just as good as anadrol.

But we bought it.  Oh we did.  Paycheck time was awesome.  We had a list of shit we knew we were going to buy and in the next few weeks?

But then of course it never happened.

Maybe our list of shit was wrong.  Maybe it's this name brand.  Because this other name brand says their shit is 127% stronger than the average brand, and I need that 127% in my life.  I was only getting like 17% potency with the shit I bought.  So fuck this shit, I'm going on my next payday to get the 127% strong shit, and THAT is what I need to get jacked and scrong.

Then of course, it never happened.  And we were dejected.  But then the next issue of MuscleRag came out and, LOW AND BEHOLD there's a new supplement.  And this before and after pic shows this dude making all kinds of gains.  All kinds (shameless HodgeTwins ripoff).

And according to this article, there is a pattern that sets in.  Over time, we become somewhat dependant on having our cabinets filled with all of these "things".  All of these powders and pills and concoctions that, at the end of the day, don't make a whole lot of difference if the most important parts of the comic book physique paradigm aren't lined up.

And that is diet and training at the forefront of all you do.  Even if you are an "enhanced" lifter, these things are the ultimate dictator of progress and performance.

And lots of guys will say they know this.  However my Facebook feed and message boards are still clogged with questions and pictures about....supplements.

And I'm laying this bit of knowledge and truth on you if you're spending big money at the supplement store each month.

1.  Training and diet - Both are equally as important in my opinion.
2.  Rest, recovery, stress management - If you don't control these then improving body composition and increasing performance in the gym will be nullified to a large degree
3.  Everything else - This could be supplements of any and all kind.

Supplements are just that.  Something to supplement a sound and efficient training and diet program.  Nothing more.  They are the sprinkles on top of the cupcake.  They aren't even the fucking icing.

You know why?  Because everything you can achieve can be done without ever buying a single OTC supplement.

Creatine has been proven to improve performance.  But only if you are already muscularly developed enough to take advantage of loading your cells with creatine.  Or if your diet is incredibly deficient in it.  Nevertheless, it's one of the few proven supplements.

Protein powders are just that.  A source of protein.  No protein powder in the world is going to give you something that food can't.  Not a single thing.

"But aren't you sponsored by a supplement company?"

I am.  True Nutrition.  And you know what I ask for every month?

Muscle Intrusion, which is essential amino acids and highly branched cyclic dextrin, and a couple of tubs of protein powder.  That's pretty much it.  Even though I could ask for lots more "things" this is generally my staple.  And Dante Trudel, the owner, is going to tell you that food is more important than supplements as well.

So even if I had to pay for these things, at no point would they ever exceed my grocery bill.  Not even once.

People say this topic has been beaten to death.  But if everyone had truly heard it, and truly grok'd these principles of truth, then the supplement industry wouldn't be making billions a year.

I don't have a problem with supplement companies making billions either.  It's a free market.  If they want to create bullshit supplements with bullshit ads and some dope really believes he can lose 30 pounds of fat while adding 30 pounds of muscle, then that's the day two fools met.

Spend your money on your gym membership or shit to fill your garage gym with.  Spend your money on food.  If you ask me what supplements can make a difference once you get past noob and intermediate levels of development (noobs and intermediates don't need a single thing off the GNC shelves), it's a good BCAA or Intrusion, a quality protein powder, and possibly some creatine.

Be cognizant enough to take a step back and figure out if you've become "supplement dependant".