Lessons: Things I would tell my younger self about getting bigger and stronger

One of the worst things about training for a very long time, I'm talking decades now, is that you end up with this collection of knowledge that more than anything, you wished you had when you started.

Now the amazing thing is, that knowledge was usually right in front of me more times than not.  However, it sometimes gets ignored because of what you want to believe, rather than what you need to believe.

I see a lot of young guys now making the same mistakes I made in my youth.  Unfortunately unless their desire was the same as mine, they will run into frustration from a lack of progress in a few years and quit.  More people quit training than hang in there for certain.  And I believe there are a myriad of factors for that.  But I believe a big factor is that guys stop learning how to improve, how to be patient, and what they really should be focusing on.

So here are some things I would tell my younger self if I could have a talk with him after he had been training for a few years, and was frustrated with his progress.

"Paul, you still aren't eating enough.  There's no other way around this.  The reason you're 135 pounds is because you just don't know how to eat, and have no idea what you need to be eating.

You need to eat a lot of high quality foods.  And I mean a lot.  You'll learn this in a few years when you finally decide that you're tired of being an anorexic looking bitch.  But even then you will make some mistakes.

Eat five high quality, high calorie meals a day.  And stop buying this Mega Mass protein powder bullshit.  It's mostly sugar and cheap ingredients.  Eat lots of whole eggs, lots of rice, potatoes, lots of red meat, and lots of fruits and vegetables.  Then next week, eat more each day than you ate each day last week.  I don't know of any other way to get you from 135 pounds to 145 pounds, to 155 and onward if you aren't going to eat more.  Throw in a little bit of junk every now and then on top of it to boost calories, but overall just eat more.  I know, I know...it's so basic.  But there's no other way."


2.  "You need to stop looking at training splits of the pros"

"Do you need to train twice a day?  No.  Do you need 5 exercises for hamstrings?  No.  You don't even need strip sets or giant sets or any of that fancy shit.  You need to worry about breaking rep PR's and adding more weight to the bar, and refining your technique.  I have no idea why you are doing 1 arm machine curls when your pipes are eleven inches.  What's that?  To get big biceps?  Dude, you will get big biceps when you're 240 pounds.  That's more than 100 pounds from now.  Do you think you're going to curl your way to 100+ pounds of new muscle mass? 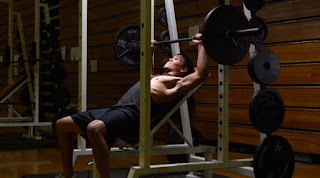 You need to squat, chin, row, incline, bench, and worry about moving more weight on those movements.  And you need to train 5 or even 6 days a week.  You know why?  Because you aren't strong enough to cause any significant inroads to your recovery ability right now.  You're weak as piss.  And will be weak as piss for a long time.  You know why?  Fucking around with dumb shit like cable crossovers and 1 arm dumbbell triceps extensions.  You need that why?  To carve out the striations in your sternum?  No.  Just stop.  You can't bench press 185 pounds yet.  There's nothing to carve."

3.  "You need to stop comparing yourself to other people"

"Yeah I know, you wanna look like that guy.  I get it.  But believe it or not, the only body that you can build is your own.  And when you sit around wondering why you can't or don't look like a pro bodybuilder who has been training for 15 years that is taking drugs you don't have access to or should be taking right now, serves you no good.  You just get depressed and it makes you question why you should even go train.

Open your training log.  Are you better today than you were last week?  Yes?  Then that's one new brick you just laid on the foundation.  And you need to focus on the foundation you are building, and not the skyscraper overlooking the city.  Build your own monument.  What's that?  Yes, it's going to take a long time but over that time span, you're going to learn a lot of shit.  And one major lesson you are going to learn is that there will be guys that improve faster than you, and slower than you.  And neither has any impact on your own training at all.

You're going to learn a big part of getting better is the mental part.  And the things that make you feel like shit about yourself need to be let go of.  I promise if you hang in there long enough, you'll look back and be pretty impressed with how far you came."

4.  "Stop thinking there is some secret supplement or training routine that is going to take you to the next level."

"Do not order that Bulgarian Power Burst Training bullshit by Leo Costa and Tom Platz.  Put that thing away right now.  And no, you will not ask your mom to buy you that fucking Cybergenics kit.  You know why?  Both are more worthless than rocky mountain panther piss.

I mean come on, dude.  Do you really think that training three times a day is what you need right now?  It's summer.  You have a girlfriend.  Spend time with her, and throw in an hour of hard training each day.  You should be focused on things like progressive overload.  What's that?  No, it has nothing to do with blue balls, shut the fuck up.  It has to do with adding a little more weight on the bar.  Yeah I know I already said that.  And I will probably say it again because you need to hear it a lot.

Bust your fucking ass under that bar 5-6 times a week and do more today than you did yesterday.  Do more tomorrow than you will do today.  What?  Yes, it's that simple!  Don't make me slap the shit out of you."


5.  "If you want to find out what really may apply to you, look at what the common factors were in training and eating the big guys did when they first started."

"Look man, here is a better way to learn.  Dig through all of these beginner routines and see what they all have in common.  Especially when you read the ones by what the pros did when they were just starting.  A lot of them look pretty similar.  Lots of basic shit.

If I give you 12 things that are all similar, and then a 13th thing is added, and it's not like the other 12 in any way, toss it out.  Use rules to base your training around, not exceptions.  I don't care that doing triple drop set giant sets worked to build this dude's arms.  You doing that shit is not required.  Just fucking....look man, I'm about to beat this shit out of you if you don't stop arguing."

6.  "Stop buying all those extra supplements"

"What is this shit?  Yohimbe?  You need this for what?  Yeah, you got that look of  a deer in headlights.  Remember the first time you got laid?  Yeah I do too, because I was there.  You know about as much about this shit as you knew about banging at that time.

You need this why?  What???  You don't need anything that is supposed to give you a massive erection.  You're 15.  You're a walking erection.  You jacked off 7 times yesterday.  You don't have erectile dysfunction problems.

And what is this shit?  And this?  And this?  Throw all this shit away.  And stop spending money on it.  We covered the food thing.  That's where it's at.  Why do I keep repeating myself?  Because you already read all of this shit before, and you still keep fucking up.  Then you whine like a bitch about your lack of progress.  Does that make any sense to you?

Oh wait, DO buy Hot Stuff when it comes out.  That shit is legit.  But after they take it off the shelves and reformulate it, it's not the same.  Stop buying it at that point.  But yeah, go stand in line for that shit when you get the chance."

"Look man, I know more than anything in the world that right now, you just want big pipes and to be admired by your peers for your strength and muscle, but dude, you will never ever get this time back in your life.

Love your friends, respect your parents, read a few books, and remember that this is a hobby.  It's a fun hobby, and one that does give you a lot of self confidence.  But obsessing over this shit 24/7 is not healthy.  One day you're going to be worried about paying bills, how to raise three beautiful little girls the best you can, and learn what real mistakes really look like.  You won't always have the free time just to sit down and jam some Iron Maiden on the drums for two hours.  So do that, then meet your buddies out to play baseball.  And stop fucking reading where cardio kills your gains.  Go run, ride your bike, and go camp out.  The gym isn't going anywhere.  Trust me, lots of guys will tell you later they remember lifting too, and what they used to be.  You're not going to ever be a "used to be".  But this time in your life?  It's awesome.  And it's not awesome because of the weights and all this shit.

It's awesome because right now, you are as free in the world as you're ever going to be in your life.  Make the best of this free time by creating lasting life memories.  You will never get a chance to do these things again.  I know why you're doing this.  I know it's because you need to build a wall up to protect how weak and inferior you feel.  Look man, lots and lots of guys hide behind this bullshit tough guy macho persona.  But we all feel this way.  That's why we lift.  Because we are trying to become something we currently are not.  Learn how to love yourself better.  Be confident, but not cocky.  And don't keep people in your life that treat you like shit, and don't appreciate you.  And likewise, make sure the people you do keep around, always feel appreciated.

Most importantly, be mindful of the choices you make and how it will impact the lives of those you love the most.  Learn how to be a great man first, and a good lifter second.

Oh and one day your best friend will write this deal where he says he hates list.  Tell him this..."you're a dumb asshole and fuck you."

True Nutrition - www.truenutrition.com
Posted by Paul Carter at 7:41 AM