Chasing poundage rather than technique -

As a novice, it can be hard not to get caught up in the early wild ride that is adding poundage very easy every week, or every few weeks.  However this often comes at the expense of maintaining or promoting proper movement execution.

Over time, these motor patterns of said lifter becomes established and these bad habits become hard to break later when attempts at maximal poundages are performed.

And while progressive overload should be the cornerstone of the novice and intermediate lifter, it shouldn't be adhered to "at any cost".


Believing a certain routine will make you look a certain way -

I remember when I was young, a few years into training, and I really thought that following a certain pros routine would make me "look like them".

I see this subtly still in the minds of young lifters or guys with little experience.  You know how?  With these phrases...

"well it works for him."

This is said by fanboys of guys they follow/idolize/want to be like...and they need to believe that because something works for their idol, that it will work for them as well.

So n so didn't use THAT routine to get jacked, if he's an advanced guy.  He arrived at that destination via other means.  And those other means would probably serve you better than following his 6 day a week split routine that he worked up to doing over the course of the last decade.

Another example of this is any time some Hollywood actor gets in decent enough shape for a role to "stand out" on film.  Without fail, magazines and websites will report on his "routine", which no one can know for certain whether it was or not.  But this doesn't stop guys from believing that if they follow said routine they will look like that within a few months.

From guys I've spoken with that are in the know about this, most of these guys run a cycle, train multiple times a day, have two or three guys helping them with their training and nutrition.  And they have millions of dollars in the bank to live comfortably off of in order to do nothing but train, eat, and "supplement" everyday in order to get ready for a role.  Do you have that kind of time and money?  Because if not, the shitty routine you are reading in that magazine where he trained "four days a week, doing 50 push ups and some swiss ball ab work" isn't going to do a god damn thing for you.

I mean how many times have we seen The Rock's workout and diet in a magazine at this point?  I wonder how many guys have done both of those in order to "look like the Rock?"

Nevermind that he's been training for over 20 years now.  Totally lost on them because apparently he just got jacked like, this year.

Newflash.  If you want to be jacked like Dwayne Johnson, be prepared to put in a couple of decades of hard work, take some anabolics, and go through phases where you were chubby, then lean, then chubby, then lean again.  None of this happens in a few months, or even a few years.  And no routine is going to make you "look like someone".  Last time I checked, your dad banged your mom and created you.  And what someone else does or did won't always help you.

Part of the process of fulfilling your genetic potential is going through the process of becoming advanced.  It's actually not until you get closer to your genetic ceiling that you've made enough mistakes and tried enough shit to know what the hell really works for you.

So be prepared to do a lot of the wrong shit.  Just know that following a guys routine that has been training for two decades isn't going to make you look like him any time soon.

This is sort of an extension to the last point.

But even more so, I can't figure out what is going through the mind of people when I read shit like this.

So you're using a program that is working well, and making some sweet ass gains, and you're going to change it because.....I literally have no snappy comeback to this.

I don't know, I'm at a loss.  But I read this over and over again.  And it makes zero sense to me at all.

Listen, if you are making progress you ride that shit out until it's deader than hell.  And you know what?  You won't even know that for months and months and months.  And you know what else?  Even then, you don't have to overhaul everything in order to keep moving forward.  In fact, that's often the worst thing you can do.  You make a change here, then see what happens.  If you progress again, that's all you do.  Until progress is no longer forthcoming.

Then you repeat that.  Make a small change.  Better?  Worse?  Nothing?

If something works, don't make a change until it no longer does for quite some time.  And then, make minor changes.  It could literally be something as slight as taking your reps from 5 to 12.  Or switching one movement out for another.

This is another area I see with most novice guys.  And a lot of the novice routines that get used by so many of them.

Your back is basically the foundation for everything you do along with your trunk and hips.  So addressing it with a few sets of shitty rows once a week is just not going to be enough.

I will say this, in my early years I did not make this particular mistake.  I have no idea if I had genetics for a big back, but I honestly believe all the years I spent early on doing chins for hours on end, and doing a metric fuck ton of various rows played a part in it.

Yet, do you know how many guys I know can't do a strict set of 10 with bodyweight only even after several years of supposed, "serious training?" 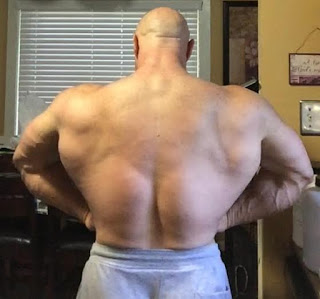 How serious are you training if you can't do 10 chin ups/pull ups after YEARS of being in the gym?

Pulling your bodyweight up is one of the most basic strength building movements you can do.  And you're too weak or too fat to do a strict set of ten....after YEARS of training?

Either you neglected your back work, and ignored hard work, or you got into one of those stupid ass "perma bulk" modes and also neglected hard back work.  Now you're too heavy to pull your fat ass up for a set of 10 on one of the most simplistic and basic movements you should be doing.

Someone will probably get mad about that, but generally when someone makes you mad with something they say, it should cause a bit of self reflection.  I mean, in this particular case it should.  If someone tells you  you're a piece of shit....well, it's possible that should cause some self reflection too, depending on the source.

Either way, so many people spend too much time neglecting SERIOUS back work early in their training, because it's hard, and it's not fancy.  Make it fancy.  It will literally carry over to everything else you do.

This really is still talked about!  I swear to God it is.  I still see it all the time.

You cannot do an exercise to "get more definition in my arms."

"Get my legs more toned."

"Get my pecs leaner."

All of these things require two things -

1.  A reduction in bodyfat.
2.  An increase in muscle mass in those areas.

I will say this, the more developed an area gets, the less fat it does tend to carry around it.  This is not "spot reduction" however.  When I read the term "spot reduction" it generally means the person thinks doing a movement for that area strips fat off of it.

So if you hate that a particular bodypart tends to carry more fat in it, you can end up carrying less fat around that area IF that area becomes VERY developed (I've seen this not only in myself but lots of others).  But that takes time, and it still takes a reduction in overall bodyfat, and an increase in muscle mass.  Doing movements for that area don't make it leaner because you're working it.

But basically what your focus should be, right from the beginning is decreasing bodyfat, and simply increasing muscle mass overall.  You're going to have an area on your body that ultimately holds on to fat the hardest, and will always be the last place you lose it.  Even if that area becomes more developed it's still probably going to be your "problem area".  Doing a zillion sets of ab work isn't going to get you a six pack if you're rocking 20% bodyfat.

Talk to any therapist or psychiatrist in the world and they will all tell you that as adults, most of who we are gets shapen, or misshapen, in our most impressionable years when we are young.  The foundation for how we think, believe, behave, and act all starts getting built from the time we are very young.  And since it is the foundation, it stays with us for the rest of our lives unless one or two things happen...

1.  Experience teaches us otherwise, i.e. we have a paradigm shift due to something happening that changes us.

2.  Extensive therapy that allows us to process the fragmented parts of trauma that happen to us in our youth.

One of my biggest issues with most beginner programs is that they lack total body development, and balance.  It's usually the same template.

Three days a week - Squatting, deadlifting, bench pressing, and rowing.  There might be one or two things in there outside of that but that's about it.

Does this look like balance to you?  Because it doesn't to me.

"Well a beginner doesn't need all those other things."

I firmly believe that a lot of the injuries you end up with down the road are related to some of the things that get imprinted on you in your early stages of training.  You'll gravitate towards movements you love, neglecting the ones you hate, and this becomes a cornerstone of future training habits.

A beginner has the same muscles when he or she starts training, as they will have twenty years later.  So why do so many beginner templates neglect these areas when doing so means the beginner becomes intermediate or advanced, is then left in "catch up" mode in regards to developing them?  Why can't a beginner use a leg curl, or do work for their brachialis?

"Because they don't need all that extra fluff.  All the major muscle groups get hit with the big movements...blah blah blah"

Beginners need to work on complete development so that less energy needs to be devoted to specialization later.  This doesn't mean the beginner or intermediate specializes, it just means they don't neglect things because a few big movements "hit the total body".

Down the line, he or she will most likely end up with an injury due to improper mechanics, or because something has been left weak, or underdeveloped.

This is what creating a muscular gap is.  When a secondary or tertiary mover in a lift doesn't get adequate attention and is neglected for years on end.  By addressing them early in training, there's less of a chance of dealing with "trauma" later.

Think of it as good muscle parenting.  Neglecting certain muscles is like leaving your toddler alone all day to figure out how to cook because they are hungry.  It just doesn't make a lot of sense.