New year, new me: What you don't fucking know

Ahhhh, here it is.

Hey, I'm not saying that to be a dick.  I've written plenty in the past about how I've let years go by without making progress, then waking up one morning and going "holy fuck, I'm not better today physically than I was last...4 years!"

Complacency sets in.  We go to the gym.  We eat "mostly healthy".

I love that term.  Every overweight/fat person tells me they eat "mostly healthy".  It's such an ambiguous term.  Because they can neither define "mostly" in a true quantifiable measurement, nor do they understand what "healthy" even means.

Some people think eating "mostly healthy" means skipping breakfast, eating a salad for lunch, then eating "just two doughnuts" from the breakroom, then coming home to a white trash dinner of Hamburger Helper in scoop sizes that would make an oil rig worker smile with pride.

That salad, I suppose, was the mostly healthy part.

But hey, you still go to the gym.  Nevermind that your physique hasn't changed in half a decade.  Or that your lifts are basically about the same....in that same half a decade.

If only you did steroids you would be just as jacked as the other jacked guys at the gym.  Except that most of those guys train their ass off, eat spot on more than 90% of the time, and do all the other things you won't and don't do.  Like spending the weekend chugging beers and eating basket after basket of bowel exploding hot wings from that local grease pot you and your buddies go to in order to escape your hostage/marriage/relationship situation at home.

But no seriously, that's you.

I'm just having a go at you, it's all in good fun.

But no really, that's probably you.

Ok seriously, no I mean it this time, we all fall into this trap.  Some of us get back on the real war horse because we decide once again "ok, I suck and have been training like a bitch and need to get my shit together."

What I do care about, is my space.

You see, in a few weeks, I will have less of it at the gym.  After being in some sort of gym for over two decades, I have found ways to avoid losing my space during the new year.  I go to the gym well before 5 P.M. and rarely go on Mondays.  Never ever, ever, ever, never, ever, ever go the gym after 5 PM on a Monday during the first six weeks after new years, if you are claustrophobic.  It's the weight lifting equivalent of black Friday but with sweatier people who are far more confused about their surroundings. 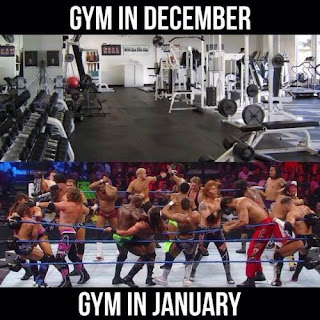 I train at home mostly during the first six weeks after new years.  If I do go to the gym, I go on weekends more, or as I said, long before 5 P.M.

My gym time is serious.  I'm sorry if you deem me hollow for saying that.  I am there to train, train hard, not talk and bullshit, then leave.  Despite the fact that I am there for that, I am actually friendly when approached.  And if someone takes up my equipment for no reason at all, I will ask them if they would like to work in with me.  I will even give a great spot if asked, and throw out some pointers afterwards if I can help.  So while I am there to train, I am not a gym asshole.

The other day, a fellow ended up joining me for my training and he made the remark between sets, "there's a lot of hot women that come in here."

I shrugged and said "I wouldn't know.  I am here to train."

I wasn't joking.  I see stupidity going on in the gym quite often, but I don't really give a shit about hot women in the gym.  Mainly for two reasons...

Ok so that's three fucking reasons.  And what?

But he really hit on a serious matter.  Your mental game.

And this is where most people are going to fail after their "new year, new me" wears off faster than a buzz from cheap weed.

You don't fucking know that it's going to take longer than 6 weeks to get your bikini body.  Nevermind that you spent the last decade undoing your teenage figure by slamming half of the picture menu at Waffle House at 3 a.m. after 17 rounds of shots.  Sure, you can wake up in six weeks by doing some ab work and "butt kicks" and boom, bikini body emerges!  No, you really can't.

You don't fucking know that the stupid "6 moves for 6 pack abs in 6 weeks" article you read in Men's Health is just bullshit to get you to buy a magazine.  If you honestly believe that your beer belly and love handles and awful fucking "dad bod" will be gone in six weeks because you did six exercises then I have some ocean front property in Montana you're gonna love.  Lemme get these papers drawn up for you. 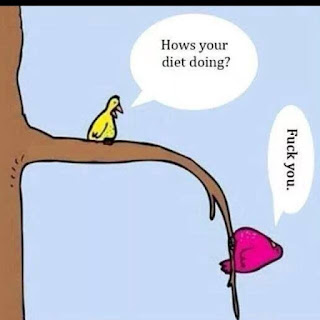 You don't fucking know that all those "fat burners" and bullshit you're going to waste your money on after the first of the year, could have gone to someone who would write you up a diet to follow, and teach you how to eat properly.  You know, knowledge and shit.  Things that are going to last you longer than the 30 capsules in that bottle.

You don't fucking know that the guy on the cover of that magazine, didn't get his body with the routine you're reading about in it.  And I'm not talking about "gross" IFBB pro bodybuilders.  I'm talking about that 190 pound shredded dude that 99% of guys really want to look like.  You don't fucking know that he probably had great genetics, or has been training for 10 years, or that he dieted his ass off for anywhere from 12 to 16 weeks just to look like that for one day....for that magazine cover.

There are so many things you don't fucking know, "new year, new me" guy/gal.

You don't fucking know, that lifting and learning how to eat properly is a life changing process that is filled with far more positives than negatives.  That it will suck when your motivation wanes, and then later - if you stuck it out - that you'd learn to love the gym, the discipline, the soreness (yes, I swear to god you'll eventually love being sore, I swear it!) and all the other shit that comes with it.  Like more attention from the opposite sex.  Unless you're a dude.  And then when you get jacked you don't fucking know that basically, just other dudes are going to ask you how to get jacked.

You also don't fucking know that I wish everyone would learn these things, and use it to change their life.  There's nothing better than hearing from a "former fat guy/gal" who got their shit together, lost weight, got in great shape, and what it did for them.

Same for skinny people who finally hang in there long enough to pack on some real muscle, and watch their body change and transform into something they are proud to look at everyday in the mirror.  And fuck you if you think there is anything wrong with that.  The people that are proud of the body they worked for, and have every right to take pride in their work.  And generally, that pride is what keeps them in this game mentally.

And now we're back to square one.  Your mental game.

It will be strong at first.  Stronger than the stench of a fart after five pounds of broccoli eating.  Then of course, like all strong farts, it passes and is barely even a distant memory.  Maybe someone makes a joke about it later if you were all in the car together and the driver wouldn't roll down the windows.

You don't fucking know if you don't buckle down mentally, you're going to fail.  You'll be a statistic.  You'll be another "new year, new me" dropout.  Go and ring that bell to signal to everyone you're quitting.

You're a quitter.  Just admit it and be at peace with it.

That's not me being a dick.  That's me calling a spade a spade.  If you announce to the world that you're going to get in the best shape of your life because the new year rolls around, and then are back to eating "mostly healthy" in 7 weeks and never return to the clanging and banging of the iron, then you fucking quit.

And the world needs quitters.  Because I need my space back.  I love my basement cave, but I do like the gym.  And I hate having to dictate my time in it so that I can train in a productive fashion.  You know, because all the soon to be quitters are taking up all the equipment.

So I will leave you with this, before you call me a dick for not writing this in a "rub your belly and pat your bottom" style you are so accustomed to at this time of year.  You know what I mean...

"It's a new year.  And if you love yourself you can turn things around.  You're beautiful inside, so let your work show the beauty on the outside too!"

So let's examine what I really did in between all of those "F" bombs I laid down.

I just gave you the road map for how to avoid being a quitter.  How to avoid the usual mistakes.  How not to get trapped into thinking that you can wake up after 6 weeks and have a newly transformed sexy AF body.

I just told you so many of the pitfalls to avoid in getting discouraged, and even better ways to spend your money.

So if you didn't fucking know, you shouldn't call me a dick for this.  You should just say "thank you - I won't fucking quit." and mean it.

I'd rather the gym be full of people busting ass because they are there to train, and for everyone to have a burning desire to really find a "new me" on the other side of the "new year".  But the statistics bear out that it won't happen.

So don't be a fucking statistic.