The accelerator can be your worst enemy

A while back the lifting community was all in standing ovation about an Instagram post that 8 time Mr, Olympia, Ronnie Coleman made in regards to the current condition of his health.

Basically Ronnie has had two hip replacements, and is having to learn to walk all over again.  In the instagram post, he's in a wheelchair being helped up (if I am recalling correctly), and talks about his regrets.  His regret, in all of it, was that he was a coward.  A coward for not squatting that 800 pounds for 4 reps, instead of 2 reps.  Because he knew he could do it for 4, but chickened out and only did two.

Mind you, I believe Ronnie stated at one point that he didn't quit competing because he was ready to retire, but because of all the issues that kept him from training like he wanted to.

His post was shared a zillion times and people so applauded his attitude about it, stating "this is what it takes to be a champion", or some nonsense like that.  Yes I wrote nonsense.

Why?  Because if Ronnie's goals to continue winning and competing were cut short due to what he was doing, then no matter how you want to slice it, ultimately it was counter productive.

Yes he did.  And could have won 9, or 10, or 11, or whatever.  So in the end, he lost out on achieving more than he could have because he never adjusted his training or mental attitude, in regards to what his body was capable of anymore.

Dorian Yates was my favorite bodybuilder when I was coming up in my young years.  Dorian trained balls out, all the time, without ever taking his foot off the gas pedal.  Even just weeks out from a show.  When there's virtually no possibility that training in such a manner is going to improve on what you spent time building in the offseason.  At that point, what's done is done.  Dorian ended up suffering torn biceps and triceps, and later said that if there was one mistake he made it's that he didn't know when to ease off the training intensity before a show, and that doing so cost him those injuries.

I read this morning that Layne Norton is in such a state that he can't bench press is down over 100 pounds due to herniated disks in his neck.  He can't squat 135 pounds without tremendous pain in his hip.  His deadlift is a few hundred pounds off of his best.  He wrote he's tried everything under the sun to recover but nothing is helping.

I've never been a fan of Layne's attitude.  I've made no bones about that.  However, I never want to see these things.  I don't.  At some point, the one bond all of us have in regards to the iron is the love we have for it, what it means to us on a personal level, and how it reshaped our lives in a positive way.  I can't imagine being in the position Layne or Ronnie is in, and not being able to go to the gym and get in a great session without tremendous pain, or having to go through rehab so I can walk properly again.  In complete sincerity, as brothers in iron, my heart goes out to both of them.

But as the good book tells us, you reap what you sow.

There's been this lifting ideology in powerlifting, especially in the "natty" community, that you need to squat 4,536 times a week, and bench press at least equally that amount.  I also read that you can deadlift a ton of times a week despite the fact that most of the best deadlifters consistently advise against this because recovering from the deadlift is very difficult.  I have no idea why this mentality has taken hold in strength circles but it has, and I honestly think it's hogwash and nonsense.  People have been getting strong(er) for decades, and doing so while maintaining training longevity because they understood that recovery was still a factor in getting better.

Layne I believe, was a huge proponent of these super high frequency training modalities.  Not knowing when to back off, squatting and benching and deadlifting on a very high frequency basis.  I have no idea if this contributed to his current issues, but ruling it out all together can't be done either.  Layne also had very poor squat technique, and despite tons of people telling him this, he refused to take the time out to fix it.

Ronnie could have changed his training ideology, and still kept winning Sandows for at least a few more years, and possibly never stared down the barrel of multiple surgeries for his hips.  Dorian could have backed off of his training intensity pre-contest time, and probably never suffered the injuries that also cut his career short.

People will point to their success and say "well they did what it took to win."  That can easily be debated.  Dorian didn't need to be training balls out just a few weeks from a show in order to walk in and destroy everyone.  The foundation he laid down to do so was already in place.  You really think he was going to shrink, or look less conditioned, if he just took his foot off the gas pedal for a few weeks before a contest, and lose because of that?  Because I don't. 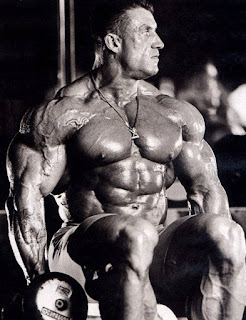 Ronnie was already killing everyone for years, and could have easily changed his training modality that allowed for a longer competing life, without the ramifications involved in the training style that ultimately ended his career.

I don't know what all was involved in Layne's issues, but as stated, I do know that it appears he was a huge proponent of doing the big 3 multiple times a week, with near maximal poundages, and I honestly have no idea how or why anyone arrives at these training junctures.

People like to say that "training/powerlifting/bodybuilding is a marathon, not a sprint."  Then why do so many sprint their ass off, trying to reach goals, without realizing that the joints and connective tissue only has so many reps in them over your training life?   If you plan on training as a part of something you will do for a lifetime, then what's the rush?  It's going to be hard to reach your goals when you become so haphazard in training that eventually your state of being overzealous causes it all to come crashing down.

Years back, I knew a powerlifter who believed in this whole "squat five times a week" bullshit.  Often working up to 550+ every single day.  After a few months, his IT band and hips were so inflamed he could no longer squat without debilitating pain.  And he never hit the numbers he was chasing as his goals.

I've read many times that you need to do the maximal amount you can in regards to volume and intensity, and while it may look good on paper to buy into such principles, the fact is, the body can and will break down if you aren't smart enough to keep some of these things in moderation.

You can't smash the accelerator to the floor, and pin your foot down on it in a permanent state without blowing something in the engine at some point.  I'm here to tell you, no matter how invincible you think you are, if you don't learn some moderation in your training, you will pay for it eventually.  Not if, but when.

If 90% of your training efforts give a return of 90%, without the consequences of surgery or pain, then I feel like that's a better option than 100% of everything giving you a 100% return, but with possible training ending problems that are going to bite you in the ass down the road.

This doesn't mean you can't and shouldn't have periods in your training where you get a bit insane to get past a plateau, but that's the point.  It should be something done in short spurts that pushes you slightly forward, before instilling some sanity back into your overall paradigm.

I've made a lot of mistakes in my own training.  And maybe it's possible that if I did some things different that I squatted more, or benched more, or pulled more, or have more muscle than I do now.  But at 41, right now, I'm in the best shape I've ever been in, and on my "good days" can still overhead press over 300 and deadlift 700, and I don't wake up everyday in pain, or have any surgeries on the horizon.  I can go sprint multiple times a week, and do any and all activities with my kids.

There's no amount of weight on the bar that can outweigh those pleasures to me.  If none of those things matter to you, then that is completely your prerogative.  But if you want to learn something valuable in regards to what all of these people and guys like Mike Matarazzo (who said, as he was lying on his death bed "it wasn't worth it"), then it's that indeed, the phrase slow and steady wins the race.

Despite my dislike for Layne's attitude (or at least how it comes across online), I do wish him a speedy recovery, and that if he feels his training methods were a contributing factor due to his current condition, he can serve as a voice to his audience not to make the same mistakes he made.  That Dorian somehow can serve as an audience to the people who follow him, knowing the value in taking your foot off the accelerator.

And that people don't end up having to suffer and go through what any of those guys did, because they were smart enough to listen, and learn from the mistakes of others, rather than their own.