It's inevitable that so long as you're still breathing and actually living life, that stress is going to be a part of it.  There's a saying that goes "life's a bitch, and then you die."

I don't buy that entirely, as life isn't ALWAYS a bitch but it has some bitchassness moments.

Stress is unavoidable sometimes.  And for those who still adhere to a great diet, and exercise, and say their prayers and take their vitamins, the results of stress can eventually be fatal.

Stress indeed, can kill you.

Yeah there's the people that get trapped under vending machines, get eaten by apex predators, get killed in car wrecks, get machete hacked in third world countries, get set on fire, kill themselves (wait, that's probably stress related), get bitten in the femoral artery by beavers and bleed out in minutes, get bitten by snakes, get ran over by various machinery, have pool tables fall on them from five stories up, drown in their own vomit, get shot to death, get beheaded by ISIS, are eaten by piranha's, burst into flames from spontaneous combustion,  die from dehydration....and starvation, get blown up in their meth lab, are bludgeoned to death, get stomped to death by elephants, do that thing where they try to masturbate while hanging themselves and fuck it all up, etc.

But for most of us, stress can indeed play a large part in how we go.

Stress and how we react to it, and create it -

We all know that one person who doesn't seem to get bent out of shape or stressed out about much of anything.

We also know that person who seems to stress over every single minute thing in their life.  That OCD maniac who can't handle you folding up a road map improperly.

Some people let things slide right off of them and have no trouble letting go rather easily.  Others have more trouble with doing so.

Most of this seems to be genetic.  Some people are more naturally laid back, and other people are uncontrollable maniacs.

The mayo clinic tells us this is what happens when we get stressed the fuck out....

Adrenaline increases your heart rate, elevates your blood pressure and boosts energy supplies. Cortisol, the primary stress hormone, increases sugars (glucose) in the bloodstream, enhances your brain's use of glucose and increases the availability of substances that repair tissues.

Cortisol also curbs functions that would be nonessential or detrimental in a fight-or-flight situation. It alters immune system responses and suppresses the digestive system, the reproductive system and growth processes. This complex natural alarm system also communicates with regions of your brain that control mood, motivation and fear.
For the most part, how we react to stress is is driven both from a genetic standpoint, and from an association and experience standpoint.  Stress is also self induced at times based on how we decide to handle a situation.

We can't help the genetic part.  Some of us are going to stress a bit more or less over situations than others.  However the degree to which we decide to stress is entirely up to us.

I used to get very irritable when I had to wait in long lines, or when traffic sucked, or when I felt like I was being terribly inconvenienced by "life".  This kind of stress, is self induced.

Over the last many months I have tried to make a more conscious effort to not let those things irritate me, and ruin my day.

The other day I was driving through a strip mall and the traffic was incredibly congested.  A new Ikea store had opened near by and people were parking all over to get to it.  This guy in a van was trying to get out of the parking lot and ends up pulling out way too far on the road instead of just waiting for an opening in traffic.  I hold my hands up like "what are you doing?" and he proceeds to flip me off.

Every part of me, in that split moment, wanted to slam on my brakes and get out of the car and put the fear of God in that guy.  And I've done that before.  After all, he disrespected me right?

Nah, not really.  He doesn't know me.  I could only be as disrespected by getting flipped off as I wanted to allow.  He didn't spit in my face, or insult my kids.  He flipped me off.  You know, common traffic sign language for "you suck" or "I don't agree with you right now."

I took a deep breath and told myself "its not worth ruining part of your day over."  Maybe that guy had a really shitty day, and maybe he's been stuck there for a long time and hasn't developed the reasoning I'm talking about here.  To just say "hey, it's traffic, I'll get out at some point."  So instead of making my day worse, and his day worse, I let it slide.  Did it take some work?  Yes.  But in a few minutes I was fine and didn't give a shit.

I made a conscious choice not to create a stressful situation in my life simply by "letting go".  He flipped me off.  Big fucking deal.

Most of us don't realize that we create the greatest amount of stress in our own life.  We decide to be stressed.  We make a choice to.

I once heard a guy say that "90% of the things we worry about never come to fruition."

I'm not sure where he got that statistical information from, but if you really stop and think about it for a moment, it at least "feels" true.

Most of the things we fret about in life don't come to pass.  Yet many of us still sit around and take up valuable time in our life worrying over if it will.

A friend of mine once sent me a flow chart for understanding when to worry.  I still look at it now and then, and it makes me laugh and keep things in perspective. 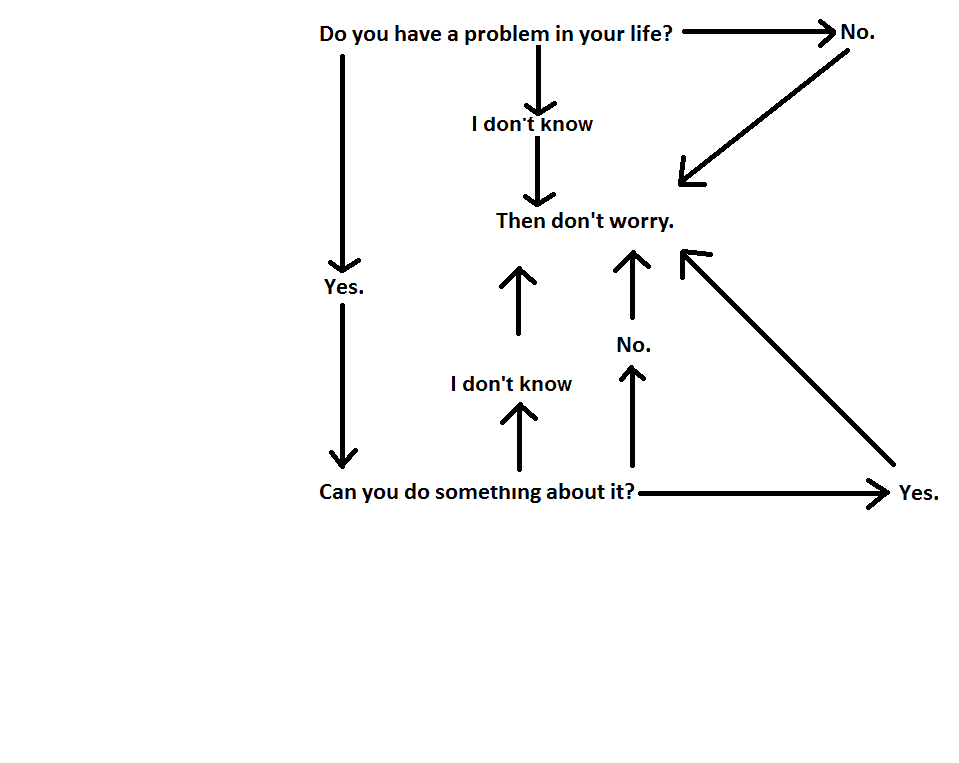 This flowchart is very logical.  But it does require us to consciously exercise our own ability to let things go.  No different than ol boy flipping me off in traffic.

"Do you have a problem?"

"Well this guy just flipped me off!"

"Is that REALLY a problem?"

"Then don't let it stress you out."

Many of the "problems" or "stresses" we have in our life, we simply create.


The consequences of stress -

From this article, "stress kills the mind one day at a time"

participants who reported the most negative reactions to stress 10 years earlier were those with the highest incidence of depression and anxiety. In particular, participants who experienced more “bleed over” stress from day to day (in other words, stress from one day continued to fuel negative reactions on subsequent days) were most likely to suffer from depression and anxiety 10 years later.
For my Captain Obvious quote of the day, stress adds up over time, and can destroy your joy and happiness.  And eventually, your life.

The article essentially repeats what I wrote about above.

Aside from reinforcing an intuitive understanding that our reactions to stressful situations can make all the difference, this study makes a strong case for “letting go” of negativity. Everyone is going to experience negative feelings in response to tough situations at work, home or anywhere else, but letting those feelings linger day after day has long-term consequences for our minds.

How personal stress can effect our training -

Training itself, is a type of stress.  And requires systemic and localized recovery to....errrr, recover from.

If you think of stress as one big factor, then personal stress will indeed impact training in many ways.

None of these things sound beneficial to optimizing training.  I do know that some people have told me they train better when life is in the shitter, because the gym is an outlet for them, and being pissed off helps.  I'm not one of them.  I tend to train best when life is going best.  And I tend to have shitty training shitty when life seems shitty.

Regardless of that, remember to limit external gym stress by consciously acknowledging whether or not you should make a choice to let something stress you out.  The lower the stress factor in your personal life, the more "recovery" time you have to grow, and get better in the gym.

For those who have suffered traumatic experiences, it can require a lot more than simply making a choice to "let it go."

For those that have experienced terrible childhood trauma or have been in war, it can be far more difficult than making a mental note to "let it go."

According to the department of Veteran's affairs, an average of 22 vets take their own life each day.  That's over 2000 a year.

We deal with the things we can process in our life, and the parts we can't, get fragmented off because we don't know how.  Those are the pieces that have to be addressed for those suffering from serious  emotional trauma.  If they don't, then generally unhealthy coping mechanisms are formed.  And that's the manifestation of stress, and the inability to deal with said stress.  Things such as drug addiction, alcoholism, and other habits are commonly formed by those suffering from emotional trauma that is left untreated.

For those suffering from severe emotional trauma, professional help is needed.  And will generally be needed for the rest of their life.  It also behooves that person to surround themselves with a strong support system.  That may mean opening up to close friends and family, or finding a good support group to attend meetings with.  If you are suffering from this kind of stress, don't ignore it.  The longer it goes left untreated, the worse the manifestations will become.

For veterans, I urge them to take this seriously.  My father suffered from PTSD from Vietnam and his suffering from it caused great suffering to those around him as well.

If you are a vet, and are struggling check out this link.  If you know a vet that is struggling, or you think needs help, please direct them to this information.......

In the end, we all end up in the same place.  How we choose to live our life is for the most part, entirely up to us.  No, we can't choose our parents, and we don't often get to control certain environments.  And life often presents us with situations that we didn't ask for, or were entirely out of our hands.  However, we do get to decide how we are going to react to those situations, and how much we decide we are going to let it effect us, and stress us.

Life is indeed a bitch sometimes.  There's no getting around that.  We do get to decide however, the extent we are going to bitch about it, and act like a bitch about it.  That's entirely up to us.  Or we can say getting flipped off by a dude in a minivan really isn't a big deal in the grand scheme in life, and simple be on our way.


Follow LRB on Facebook - https://www.facebook.com/LiftRunBang
Get Base Building on Amazon - http://www.amazon.com/Base-Building-Paul-Carter-ebook/dp/B00H18K0LI
Posted by Paul Carter at 8:45 AM