The cost of happiness

The simple fact of existing in this world means you will be, at times, subjected to loss.  There's very few things that you will ever be able to fully hold on to forever.  Mainly because forever doesn't exist, and life itself is very finite.  But even so, nothing remains the same.

Unfortunately, during our time here, life will eventually strip you of everything you hold most dear to you, and remind you every so often of just how cruel "existing" itself can be.

We will feel deceived, and foolish, and wronged in ways that we feel is incomprehensible.

We ask how it is that the person we loved so much, could speak to us with words that even our worst enemies would feel is harsh.  How could they use the pieces we gave them that we felt were so fragile, that made us feel vulnerable, and create a jagged sword with it, and slice us apart with it?  How could they ask us to open up who we are to them, and tear our walls down so that they could be close to us, only to use that proximity to run that jagged blade up our spine?

But they will.  The people we love the most, will hurt us the most.  For no other reason than they have the ability to do so.

The people that were once our "safe place" will at times, become something entirely different.  They will emotionally enslave us and become our tormentors, dragging us across a bed of nails all the while telling us it's entirely our fault.

And unfortunately, you too will play the role of tormentor at times as well.  Intermittently donning the masks of both tragedy or comedy.  Playing both the roles of both puppeteer, and puppet.  You will be both victim, and assailant. 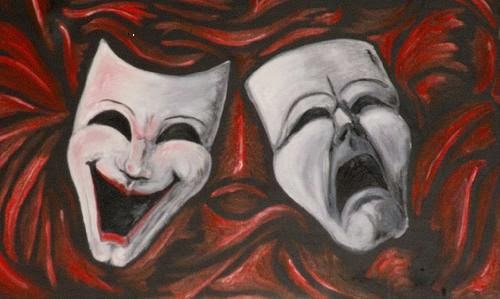 We so readily identify when we are the victim, or the puppet.  Those moments are incredibly apparent to us.  The times when we are lied to, betrayed, scorned, rejected, dismissed, or cast aside.  Or even worse...that our needs or feelings be looked upon with apathy or indifference.

"How could they just not care at all?"

There will also be things that are completely out of our control altogether.

We will wonder how it is that our child, or mother, or father, or husband, or wife, or significant other could be stricken with cancer, or some other terminal disease.  We will ask how "fair" is it that they could be taken from us, when we love them more than the oxygen we breathe, and are every reason we even continue to want existence.

How "fair" is it that some asshole ran a red light and now we have to sit and watch a loved one cling to life in a hospital bed?  How fair is it that we have to watch them suffer so tremendously for a wrong they didn't commit?

All of these moments engrave that very old cliche that "life isn't fair" deeply into us.  And we will come to understand that no matter how "good" we are we will suffer.  We will come to know loss, despair, and grief.

It is completely inevitable.

What is also inevitable, is that life always gives something in exchange for whatever it took from you.  No matter what anyone tells you, there is no such thing as a "no win" situation.  But there's also no such thing as a "no lose" situation either.  When something is taken from you, something will remain in its place.  It's not always apparent to us at first, but it's there.  It often just takes time for the fog to be lifted, and for our eyes to be opened to it.  It's what creates the "what I know now..." in us.  Even if those moments of loss only create the awareness of loss, then that alone creates experience and association.  Wisdom is invaluable, and for most of us, the cost of attaining wisdom can be very high.

Loss serves many purposes outside of bestowing wisdom upon us.  It's a reminder to us that we grieve because we loved what something was.  That at one time, we held something uniquely special to us.  Loss reminds us of our own mortality, and the mortality of the people and things we love.  Loss is often what gives us appreciation.

A few years ago, I lost the best dog I ever had.  My bullmastiff, Dozer.  He was with me for 11 years, and the love I had for him was greater than that of any dog I had ever owned.  I had driven hours and hours to a farm to pick him up.  I brought him home and he and my daughter, who was only 2 at the time, bonded immediately.  As a pup he followed her everywhere, and they played together constantly.  When he matured into a stout and powerful stud, he played the role of protector and guardian.  If I wrestled or roughoused with her, he'd immediately let me know that he did not approve.  If the gate to the fence was left open in the backyard, he would not leave the yard.  He would stand watch.  Making sure that no one dare enter the yard, and that his playmate was safe. 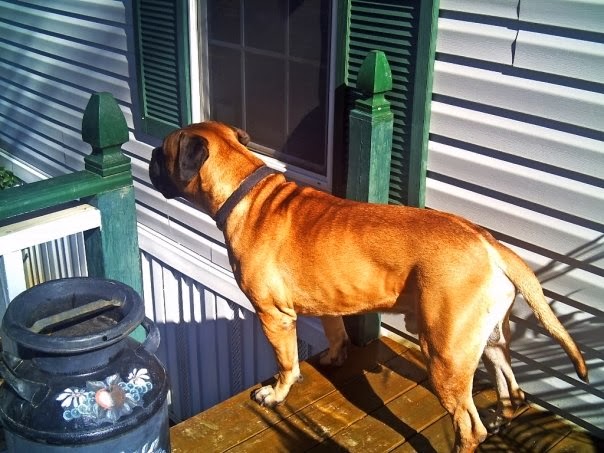 A man from the gas company learned this lesson the hard way when he opened said gate, and Dozer charged him full throttle.  I'm fairly certain he pissed himself trying to get back out of the yard.

Dozer hated when we left him to go on vacation.  He hated the kennel.  He let me know this by tearing up his favorite blanket and bed while he was "imprisoned" there (I'm sure that's the word he would have used if he had been able to talk).

So the next time, we left him at home, with the dog door open and let the neighbors check on him.

When I returned home, he woke me in the night by getting right in my face while I was sleeping.  He never came into the bedroom, so I knew something was up.  He strolled casually back into the living room where he then sat right beside the elephant sized turd he put on the floor for me.  Again, his protest for being left alone for too long.

After that, he always came on vacation with me.

Dozer was the strongest and most vibrant dog I had ever owned.  He was 135 pounds of lean muscle, and when he ran it was almost majestic looking.  He was so handsome that if I took him anywhere, anyone that saw him immediately had to come pet him, and marvel at what a specimen he was.

Dozer died from cancer.  It whittled him down to just a mere shell of what he was practically overnight.  When we gave him his last bath before the trip to the vet, he was so weak we had to help him out of the tub.  The same dog that would jump into my passenger seat, and slobber incessantly in my face, now had to be lifted into the car and placed gently in it, and he collapsed on the seat.

Life took away what he was.  And it took away something I loved so deeply.

A few days after he passed, I was getting ready for bed and going through my usual routine of walking through the house, checking all of the windows and doors to make sure they were locked.  After my final check of the front door, I turned to kneel down and hug my buddy goodnight, as I had for the past 11 years.

Lost in "routine", I forgot that he was no longer there.  And my legs gave way beneath me, and I fell to the floor, and sobbed for hours.

We will never understand how sweet something actually is, without understanding what bitter tastes like.  We cannot truly appreciate the comfort of the light, without knowing the cold depths of the pitch black.  And it is up to us to inhale as much of those sweet moments as we can, because they are not forever.  It is up to us to bask as long as we can in the warmth of that light, because eventually the darkness will return.

It is also up to us to remind ourselves, that when the bitter is so sour that it contorts our face, and makes us wrench, that eventually the sweet will return as well.  It's up to us to remain steadfast in the darkness, and not let it misshape us into something grotesque and ugly when the light finds its way back to us.

Life will unstich us.  It will empty us of resolve and deplete us of our strength.  It will also give us the chance to be restored and resurrected into something new afterwards.  Something stronger, something wiser.  But we have to allow ourselves to embrace the understanding that we can't grow, or get better without loss.  And we have to come to the understanding that we can't allow loss to rob us of those opportunities to become something stronger.  Loss can make you weak if you allow it.  It can make you jaded and bitter if that is what you choose.  But ultimately, you get the choice to decide the mold and shape of who you will be once the pain of loss has been lifted.