Not because of a fear of crashing or some shit like that.  Just because of the monotony that is air travel, and the reminder of the incompetence of most people.  I'm working hard on being a kinder, gentler Paul but air travel really tests the limits of that for me more times than not.

For example, why the fuck when the plane stops does it take everyone so long to get their carry-on bag, and walk off?  I don't understand this at all.

You reach above you, grab a bag, walk off the plane.  But without fail I'm always sitting there for 10-20 minutes.  It reminds me of when traffic on the interstate has come to a crawl, and you're stuck for half an hour and when you finally get to what's holding up traffic it's like a Volvo on the side of the road with the emergency flashers on.

What would be a great thing for the airlines would be for them to let people that don't have a carry-on, to get off first.  That'd be great.  I really wish they'd work that in there.

I also rarely if ever sit next to someone interesting on a flight.  By interesting I mean someone that can or will even hold a conversation.  Not that we have to bond or hold hands, but if I'm sitting by you for over 2 hours then having a chat to pass the time doesn't seem like it would be an insurmountable chore.  Then I get reminded of how socially awkward some people can be, and I put my headphones back in and close my eyes.

You also don't know in this day and age who will be sneaking photos of you at the airport.  Funny, and maybe slightly creepy, someone took a pic of me at the airport and then sent it to a friend.  Well, that friend knows me, and sent me said photo. 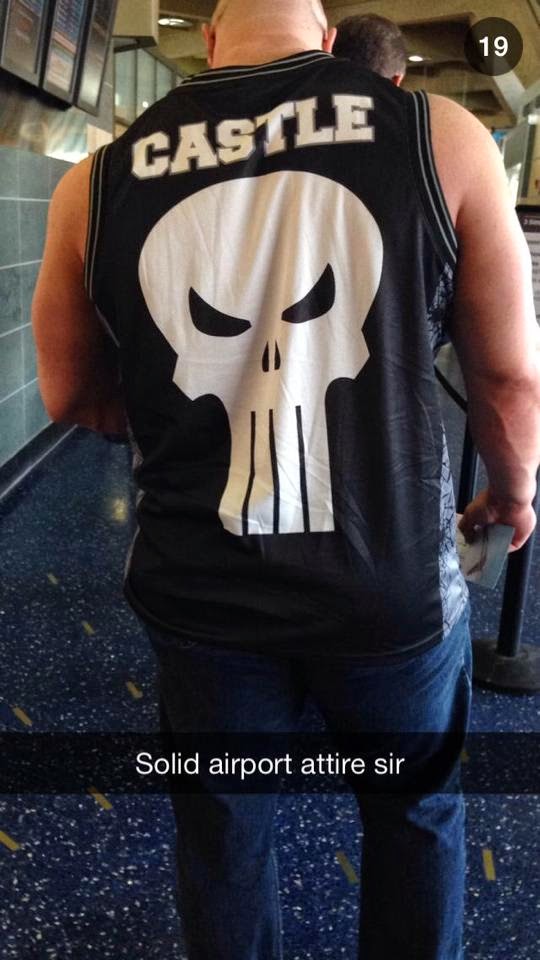 Apparently she liked my airport attire.

I arrived in Tucson and met Danny Sawaya, the owner of Tucson Evolution with a couple of his sidekicks; Chris and "Panda".

I was starving and borderline hangry so we went straight from the airport to an all you can eat sushi joint that did in fact have some tremendously good sushi.  I think I ate 7 rolls, but skipped on the 8th one because the look and the smell of the scallops did not sit well with my "don't eat that shit" meter, and I passed.

I was supposed to do a podcast with Chris and Panda after, however I was pretty exhausted after they were kind enough to reschedule it.

Looking forward to this seminar and working with people this weekend.  Now if I could just shake this recent bout of insomnia I'd feel even better.
Posted by Paul Carter at 7:59 AM