If you picked up a single muscle rag in the 90's at some point you most definitely would have come across a one or even two page ad displaying many before and after photos by a company called Cybergenics, claiming all sorts of ridiculous shit in the way of muscle gains that not even a stack of tren and dbol could accomplish in such a short period of time.

For those that were fortunate enough to have avoided this shit, Cybergenics was basically a program that came with a box of seven supplements (six bottles of pills and one bottle of a sub-lingual), a video (VHS baby), and a training manual.

Let's just skip all the foreplay here and get right to plowing shit sideways.


I'm not sure where to start with that.

Their spokesperson was a bodybuilder by the name of Franco Santoriello.  Some bodybuilder who had graced the covers of most of the muscle rags that I bought each month.  Even better, Franco attributed his bodybuilding success to that of this particular kit.

How could I doubt him?  The Cybergenic ads had about 14 before and after photos of him throughout his "Cybergenics journey" where he went from a fat sack of shit to that of a pro bodybuilder level physique. 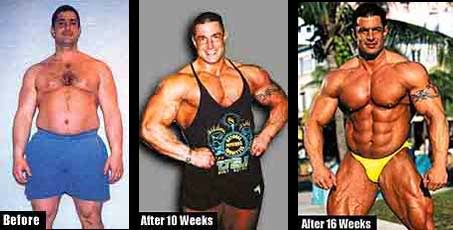 I couldn't find the ingredients for all the bottles, and I don't remember reading words like "Methandrostenolone" as being part of the ingredients.  But basically, it was just a bunch of various vitamins and minerals with some herbs thrown in that made your piss turn into Luke Skywalker's light saber.

Being the young and gullible schmuck that I was (am?...just not young), I was mesmerized by these ads claiming that I could drop bodyfat and gain lean mass at an astounding rate.  Not only that, there were tons of pictures of regular dudes that had done this very thing while using this kit!

Still.....I was skeptical.  Ok so I probably wasn't because I was a dreamer god dammit, and it was always more fun to get lost in the dream of something working than being a skeptic.

The biggest hump was that I was young, and didn't have a job other than the slave labor I did for my dad, and these kits cost around $140.  Mind you, this is late 80's and early 90's.  That's like a million dollars back then.

Somehow and someway, because my mom thought the sun rose and set in her baby boy, I managed to talk my parents into buying me this certified box of gonorrhea discharge.

I remember getting home and opening the box and slipping that video into the VCR and feeling all of my doubts and worry immediately subside.  That was because fucking doctor Stephen Crawford was on said video, erasing all fears about this validity of this program.  He told me, that this was giving me an alternative to the use of anabolic steroids, and that some jacked and swole was about to be all upon my ass in no time flat.  And he's a doctor.  He had on a stethoscope and everything.  Totally legit.

Now let's examine that phrase for a minute.  No, not the one about jacked and swole being up on my ass.  The one before that.

"An alternative to the use of anabolic steroids."

This phrase could mean anything.

Drinking cat urine could be an alternative to taking anabolics.

"I don't want to take test and deca.  So I drink cat piss as an alternative."

"I don't want to destroy my prostate and liver.  So my alternative is pond water.  I drink pond water weekly, and get sick as fuck.  Same thing."

At this point in time however, I took it to mean that these pills and this liquid and this training program, was indeed as powerful as juice.

The real key to the Cybergenics program was really the training routine, and diet.

I'm going to have to tap into the mental vault for this one but basically the training was based around these principles.

I believe you trained 6 days a week for the most part, and you also had to do fasted cardio in the morning, and then another cardio session in the evenings.  You couldn't eat before the first cardio session and couldn't eat carbs after the last one.

I get exhausted just thinking about training that way right now, and feel an injury coming on from doing shit like "negative failure flyes".  Not only that, but doing all of this work on very low carbohydrates was brutally hard.

Now there are some good parts to the program here.

For one, the program was mainly built around the diet and training.  And that's never a bad thing.

You could probably do the diet and training and see "something" in the way of results (not sure what they would be though honestly) without ever taking any of the magic pixie dust.


The main issue I had was with the marketing of it all.  It was obviously disingenuous in every way, and based around lies and bullshit.  Franco didn't get big and swole from Cybergenics.  Maybe his pocketbook did, but his body was built with all the same chemicals every other pro used.

I'm not sure if every "before and after" success story was bullshit either.  I'm sure some dudes did use the program and lost some fat, or possibly gained some mass (though I'm not sure how they would have survived the onslaught of that program for the entire duration).  But like most every company back then, they relied on appealing to the dreams of young men like myself, that wanted very badly to achieve something meaningful in the way of results.

If you scaled back the training intensity of the program a bit, it might be a viable option for a bodybuilder to use.  But it would take some serious massaging.  The supplements were nothing more than a Centrum broke out over several bottles with a few additives here and there.

Cybergenics later went on to make several other kinds of kits, and the ads and campaigns were of similar nature.

It was the 90's.  Hyperbole and clown pants were what sold.  And people bought in bunches.
Posted by Paul Carter at 10:42 AM