5 training mistakes you should avoid

Seems obvious you shouldn't do this doesn't it? However I am guilty of this as well.

Now when I talk about "hurts" I mean in a bad way. When a newbie starts training most everything is going to "hurt" in some way. Learn to differentiate between a good hurt and a bad hurt.

What I'm talking about here is the bad hurt. After several separations of my shoulder from football my bench was stuck in the gutter for years and years. Not because the strength wasn't there. All of my other lifts said I should have been consistently benching 400+ easily. But my pecs and shoulder hurt after just a few weeks of benching only once a week. So this is how it typically went....

During those 3 or 4 weeks my bench would run up pretty fast, but the pain would run up just as fast. I KNEW there was no way I could get back into the 400+ territory if I wasn't benching at least once a week right? RIGHT?

Wrong. I knew that if I wanted to keep competing in powerlifting that I would have to figure out a way to bench, but I knew I couldn't bench every week. My permanently separated shoulder caused all sorts of physiological problems and there was no fix. But could I gain on benching less frequently?

So I brought my grip in to protect my shoulders, and started benching every other week. I did singles only to limit the amount of work in that plane. The next week I would do heavy inclines. I would still get tender in my pec-minor but it was manageable. In a couple of months I hit 405, then 425 and just missed 435 on an off night. I feel confident that I can hit 450 within the year with this method.


The lesson here is that if an exercise causes you chronic pain no matter how much you love that lift, you have to figure something else out. Working around injuries is something everyone who lifts long enough has to do. If it's a technique issue, then have someone qualified to watch you perform that lift. If it's something physiologically related, then figure out a work around. The point is, don't destroy your joints or cause permanent damage because you are stubborn. Drop something if it hurts or figure out a work around.


This is common with young guys in both powerlifting and bodybuilding. And yes I've done this one too (look, if there is a mistake to make in training I've made it!). I have news for you, doing Branch Warren's routine will not make you look like Branch Warren. This is a fact.

Now I'm not saying top level bodybuilders and powerlifters can't help teach you how to train, but you really need to be your own lifting scientist, and figure out what works best FOR YOU. 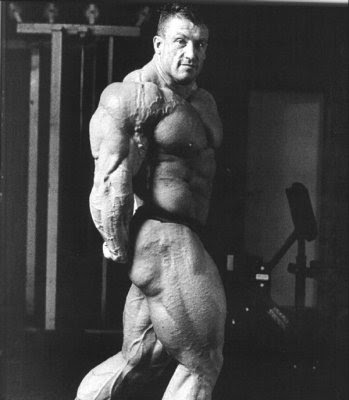 Doing Dorian's routine won't make you look like him.

Start with the basics like squats, deadlifts, bench, overheads, chins, dips, and rows and some simple progression. Start with something simple like training 3 days a week. Add weight when you can; rest when you're tired; train hard when you're feeling good. REALLY listen to your body and make good notes about this in your training log. Eventually you will figure out what works best for YOU, and then you'll progress faster than following the routine of a ghost writer for a muscle comic.

This is another common one I see from young guys a lot.

"I want to get, you know man, really ripped and put some muscle on too."

Ok, as I have noted several times, this is doable for a short while when you first start training but outside of that this is pretty much an impossibility. I don't care what anyone else tells you. Gaining muscle requires a surplus of calories. Getting ripped requires a calorie deficit.

Are there cases that are the exception? Sure, of course. There will always be an exception. But the saying about "that's an exception, not the rule" is oh so true here.

The guy that wants to "get ripped" and "get big" at the same time, generally does neither and trains his ass off in one spot. Having contradicting goals, or too many goals, will make sure you do a lot of work with little in return.

Instead, have a plan that covers everything you would like to accomplish, but at different (and appropriate) times. If you are currently 200 pounds @ 9% bodyfat and want to be 215 @ 7% bodyfat, you'll need to train for mass first. If you did everything correctly and gained 1 pound of fat per 1 pound of muscle you'd end up around 230 or so. Now you should have a plan to diet that 15 pounds off.

If you're 250 pounds and 18% bodyfat and want to be 240 with 10% bodyfat you'll probably need multiple steps. First dieting down to a sub 10 percent bodyfat figure, then slowly gaining back up and possibly (almost surely) dieting again.

If you have multiple goals, figure out what order they should be in and then plan accordingly. Then read the next lesson..........


Not being patient enough -


This is another one I can identify with. It's hard to be patient when it comes to your own body. You work like crazy and you don't get stronger or leaner or bigger or whatever it is you are trying to make it do. Or at least, not at the pace you think is acceptable. It can really try your patience at times.

For most people, physiological changes occur slowly. Even if you are doing everything right, it's probably not going to be at the speed you wish it were at. During those periods where nothing seems to be working it sometimes feels like you want to throw everything out the door and say "I give up". But more times than not if you just keep plugging away, progress will be right around the corner.

When I was younger and wanted to get bigger I can remember watching the scale not move for weeks and weeks on end. How could I not get bigger when I was eating so much and training so hard? It was frustrating beyond belief.

Then I would wake up one day, and literally be 5 pounds heavier, no joke. That's almost always how it happened. It was never a steady progression, it was usually a sudden increase, or if I was dieting, a sudden decrease. As much as I try to stick with the pound a week for both gaining mass and losing fat, the body doesn't always work on our clock. It doesn't mean the formula is wrong, just that the body might not be on our timetable right now. If your plan is solid, see it out and be patient. Generally once the gains (or fat loss) start they will roll for a while. It just takes a little while to get the locomotive going full speed ahead.


This probably should be #1 on the list really. I wish I had a dollar for every guy that was going to be the end all/be all of powerlifting/bodybuilding/strongman/whatever.

I knew a guy that constantly set unrealistic goals. His training was sporadic, he rarely did any hard leg work, and did some of the weirdest training stuff I can remember. I remember he did something like 405x8 in stiff leg deadlifts then popped off about how he would do 500x15 in a year. After I teased him about it he got butt hurt and flamed me for not "believing in him".

On the other hand, I'm friends with a pretty well known fellow in the strength community and after he strict pressed 300 overhead for the first time, someone asked him what his next goal in the overhead press was.

This guy is well respected and successful in the strength community and constantly meets goals he sets for himself. The former fellow is a blowhard do nothing. What's the difference in the two? One guy understands the small steps needed to accomplish bigger goals, the other does not.

You can't climb a mountain in three big leaps. It's one small careful step at a time. Most people don't understand how setting big, unrealistic goals is bad for them.

"Well shoot for the stars and if you fail at least you hit the moon" or something like that. It's a bullshit line. The people who plan like that generally don't even get out of the atmosphere. The guy that gets to the moon is the guy that says "hey let's make sure the shuttle is working properly first."

So allow me to rant for a minute because this is a pet peeve of mine.

People who tell you "you can accomplish anything if you just put your mind to it" are liars. There is a reason no white guy has ever run a 9.anything 100 meter dash. It doesn't have anything to do with mind over matter. You have limits. You have a genetic ceiling. Understanding your weaknesses will actually help you reach your highest potential. Just so long as you understand how to focus properly. The little engine that could didn't say "Let's race a Ferrari!" did he?

I am a pathetic deadlifter. So I didn't stand up and say "I'm going to deadlift 700" when I was pulling 585. I finally just said "let me figure out how to pull 600". After working out a good training plan and several months of hard training, I didn't pull 600, I pulled 615. Setting an attainable goal helped me to train properly, and actually exceed my goal.

I have found when people get overzealous about goals their plans become as big, or bigger, than their goal is, and more times than not they are overwhelmed and burn out before they ever really accomplish anything.

Adding a mere 5 pounds every other month to a big lift turns into 30 pounds on that lift in a year. That's a crazy good gain for an advanced guy. Just make small attainable goals fairly often and before you know it you will be able to look back and see that you probably far exceeded what you thought you could accomplish.

I hope you can benefit from my mistakes and not make the same ones. As someone once told me, the difference in the fool and the wise man is that the fool learns from his own mistakes but the wise man learns from everyone else's.
Posted by Paul Carter at 5:46 PM