“How do you manage to stay in shape with kids and a job?”

“How do you find the time?”

“Where does your motivation come from?”

These are the questions I am often presented with by my friends and fellow moms.


I haven’t always been dedicated to exercise and healthy eating. In fact I grew up chubby and awkward. The awkwardness came from being born with a dislocated hip that required seven surgeries before I was two years old (more on that later). But most of all I was lazy. I hated playing sports and outside of dance, hated doing physical activities. I spent most of my youth sitting in front of the television or talking on the phone. Thank God they didn’t have the internet and Facebook when I was a kid!

During the summer of my freshman year of high school, I inexplicitly lost weight and returned to school a much thinner me. Needless to say I got a lot more attention than the short haired chubby girl everyone knew from before. 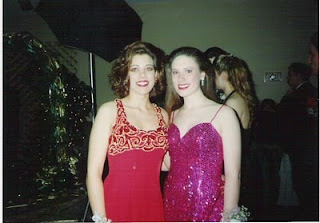 However my eating habits never really changed much and after I graduated my best friend and I took a summer job out of state working at an amusement park. My nights were filled with cheese-wiz and better-chedders. We even put cheese-wiz on potato chips! We cooked quite a bit as well but for the most part our dietary habits were atrocious. And my once thin body began to show it. I never got fat according to the scale, however I wasn’t going to stop traffic either.


"You wanna go out with that guy?"


After summer I returned home and a few months later I met my future husband, Paul. Paul was big muscular guy (which prompted my cousin to ask me the question in bold above) and was obsessed with lifting weights and doing something he called “conditioning” (which is really just another way of saying running and sprinting). I was a member of the local ladies gym but like a lot of women, I didn’t really know exactly what I was supposed to be doing in there. But I went in anyway and afterwards me and my friend would treat ourselves to the local steak or Chinese buffet. After all, we had “earned it”. Right?

Paul tried to straighten me out but years of big Italian family eating was engrained in my blood. Half the time I ate good and the other half…well not so good. My knowledge of lifting properly increased with Paul’s help and after some hunkering down in my diet, my body improved again. I lost weight and regained my thin figure. But I still did not “love” exercise, and my love of greasy fried food never waned (and I still love it and believe I always will, but don’t eat it very often now). That was over 15 years ago. 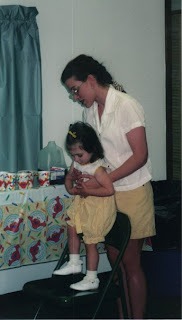 At our first daughters birthday party. Just because the scale says you are thin does not mean you look good.

My first big step in getting fit

Four years ago we had our 3rd daughter. I didn’t gain a terrible amount of weight with her, about 40 lbs. but when you are 5 foot 4 inches tall it‘s not ideal either. Shortly after she was born my husband and I decided to go on our first vacation in over 10 yrs. We were going to Las Vegas and I sure as heck didn’t want to be fat on vacation. I had to get my training and diet in order fast. Paul had gained sympathy weight with me for the entire pregnancy and was fat as well (thank you honey!). He sat down and mapped us out a training and diet plan to get us into shape for our vacation. We needed simplicity so our diet was based around 3 small meals a day and 2 or 3 meal replacements. We ordered several boxes of a meal replacement and when it arrived, there was an advertisement for a body transformation challenge. All I had to do was submit before and after pictures and an essay. My interest was piqued and I decided I wanted to give it a go. So we decided to do it.

Paul and I took each others before pictures and boy was that a wake-up call. I don’t think there is anything worse than seeing a picture of yourself in a swim suit post-baby. Talk about horrifying!

I spent the next several months dieting and doing cardio like never before and being really consistent with my lifting. It wasn’t easy with my busy schedule but it was important to me. I had a photo shoot scheduled and a vacation that was paid for. Having those goals made it very easy to stay focused. When vacation time came I was in good shape, and donned my bikini for the pool and felt good about it.

Of course I look mad, you'd look mad too if you had to take this pic right after a third kid! 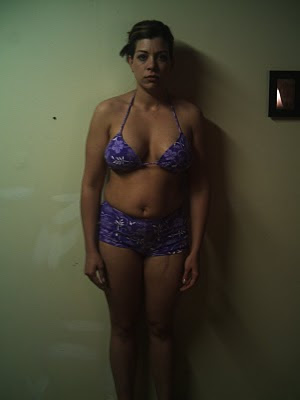 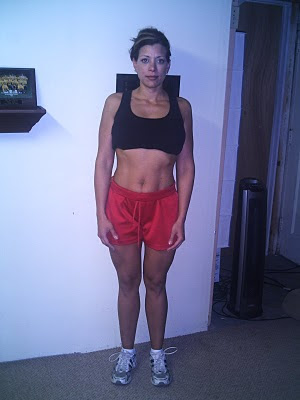 
Soon I began to get a question that was music to my ears.

But I wasn’t done yet. I still had the photo shoot for the after pictures a month later. I wasn’t too nervous though because I knew I had put in the effort and given it my all. Tragically the photo shoot pics were lost but I managed to keep some from home that were taken when we arrived back from Vegas (those are used in this article). My conditioning for the photo shoot was even better however and it still makes me mad that we can’t find those pictures! Anyway…

I discovered something about myself throughout this process that I had never known. That I COULD do something physically difficult if I really WANTED to. That is the key to success. You really have to want it and for some of us women we need a good reason to want it.

Not long after my photo shoot I decided I wanted to try my hand at martial arts. Paul had also been involved in that for years and always wanted me to get involved with it as well. So we signed up for Krav Maga together and off I went. It was during that time, I’m sad to say, that my hip began its downward spiral, and the worse it became the more my exercising and fitness suffered. I began to walk with a worsening limp and my pain was constant. Soon after I could no longer squat or deadlift, two exercises I had learned to love, and I could do very little in the way of cardio work. I had to quit Krav and eventually I was relegated to doing water aerobics and some light upper body work. I tried to keep my diet in check but sometimes found myself comfort eating because of the depression I found myself in.

The happy ending to that is that I finally had my total hip replacement done in September of 2009 and within 6 weeks I was cleared to do whatever I wanted to. Once again however, I was starting from scratch. I was out of shape something terrible, my strength was gone, and I had nothing to really inspire me at the time. Then a friend suggested I try competing in the novice division of a fitness show. My first reaction was “absolutely not!” but Paul encouraged me as well, and now I’m in full swing preparing for that, and motivation is high. I will have to reach a level of muscularity and conditioning that I never have before, and that’s a challenge I look forward to.

I think the moral of the story for me in all of this is that I have acknowledged that I am not the most self driven person in the world, but having something to “show up” for helps me tremendously. So for women who read this and also feel like sometimes they have trouble finding motivation I highly suggest finding something you have to “show up” for. It can be anything. A vacation to the beach in a swim suit you can’t currently fit into, or do your first 5K or compete in a bodybuilding show. Don’t laugh. When you sign your name on something and realize you have to “show up” it has a very motivating effect.

So don’t make excuses. Find something in your life you feel like you want to show up for and put your money where your mouth is.

Best of luck and remember to "show up"!
Posted by Paul Carter at 2:25 PM