A long time ago, in a galaxy far, far away there was this chump who did really heavy deadlifting in his basement in front of the washer and dryer, all the while screaming "EASY!" and "I KILL IT!" as he pulled everything from 135 to 700.  That'd be Pete Rubish.

I met this joker for the first time in Chicago at the Juggernaut seminar, however before that we had communicated online about how ridiculous his training was, and how he needed to find some structure. 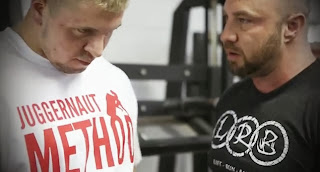 Pete loved to essentially max out.  On everything.  All the time.  Pete's squat and pull, and his take no prisoners intensity fueled his early training progress and helped him rise to very high strength levels at a rapid pace (his great leverages for pulling probably had something to do with that as well).  But Pete lacked structure and often found himself taking 1 step forward, and 2 steps back.  And his bench was well, how shall I put this....well it sucked nuts.

Pete was pulling over 700, but benching anywhere from 315 to 335.  I've said for some time that to me, strength isn't about singular demonstration of one lift that you are genetically built for.

Strength, to me, is about being strong across multiple avenues.  Ed Coan isn't considered the greatest powerlifter of all time just because he pulled 900 at 220.  He's considered the best because he was strong on everything.  He could do press behind the neck with 400 pounds, benched mid 500's, pulled over 900, and squatted a grand.  He was strong on anything and everything he did.  Same for Kaz, and the same for any of the other "greats".  Yes, most of those guys had a lift that was a little more superior than the others however, they were all strong in every facet of moving weights.

Pete was constantly underachieving in his meets because he was terrible at picking attempts, and because his bench sucked.

So when we were in Chicago and had a chance to train together, it became obvious to me why Pete was struggling with his bench.

In Chicago Pete and I trained together, and we agreed to do one thing I wanted to do and then one thing he wanted to do.  So we did press behind the neck to start.

Pete's shoulder strength was some of the worst I'd seen for a guy that was as strong as he was in everything else.  I mean he had the shoulder strength of a 10 year boy on estrogen treatments.  He maxed out at 185 for a HARD single on overhead work.  I mean, it was a true max.  So I knew right then, that Pete needed to really focus on bringing his overhead strength up.  I personally do not get any carryover on my bench from increasing my overhead press, however I believe I am an anomaly in that area.  Most guys will get carryover from increasing their overhead press to their bench.

The other part of the "shoulders" that gets overlooked however, are the rear delts.  The "base" that everyone talks about in benching is really the upperback and that is made up of essentially the traps and rear delts.  Pete was weak in his rear delts, so his stability on the bench was indeed lacking.

After overhead work, Pete and I did some tricep work.  Again, his tricep strength was so lacking it was hard for me to fathom that he had ever lifted weights at all.  I knew this would need to be fixed as well.

I did a standing push test on Pete to determine where was actually strongest.  Basically, he would shove against my hands.  Once we found where he could shove me with the most power, we determined his grip width.  It was closer than he had expected.  This did not surprise me, as most guys do in fact bench far too wide, then wonder why their pecs are always getting pec strains or tears and why their bench strength is hit and miss.  It's because benching wide isn't generally the area where most guys can generate the greatest amount of power.

I know there are lots of great benchers that bench wide, but believe it or not, wide benching generally favors guys BUILT for benching.  Guys NOT built for benching (most of us, believe it or not), can generate more power with a closer grip than we expect.  You don't have to go as close as I do (15" or so, however I am changing that up) but it's generally a little closer than you're probably benching now, unless you have already remedied this.

Pete did what a lot of guys do in regards to the bench that make very little progress.  And that is, max out with singles or lower reps, and rarely incorporate rep work or paused benching.  Show me a guy that struggles on bench or has been struggling and I'll generally show you a guy that maxes out on it too much, or uses singles too much.

Rep work is king in terms of building your bench.  Not singles, not doubles.  Triples are ok in doses.  However 5's and 8's really build the bench.  If you look at all of the big benchers of the past, they all did TONS of rep work.

Reps build your bench.  Especially if those rep sets are paused.

Here's a little hint.  Your touch and go bench doesn't mean shit if you're a powerlifter.  I have no idea why people even do it.  Touch and go anything doesn't build paused anything.  It just doesn't translate.  If you have to pause in competition then why are you training your bench with touch and go reps?  I don't get it.  The same can be said for your deadlift too in case you didn't know.  Deadstop reps make shit much harder, and that's a good thing.

The other thing I would include would be the addition of the 350 method on the incline press.  I'm not going to try and explain why this method works so well for improving the bench, but I've used it myself and on everyone I've trained and without fail it increases the bench.  If I had to venture into why it works so well, it would just be something as simple as the fact that the volume really does wonders for hypertrophy in the pecs and triceps.

So for the people who hate incline, if you have a shit bench, maybe you should get with the program.  I have yet to meet someone that legit trained to increase their incline strength that did not get carryover to their bench.

Base Building and principles -

I had Pete doing a tremendous amount of volume early on.  All paused work, all sub-max, and then heavier work on his overheads (usually sets of 5-8) and trying to beat his 350 weight for inclines (he was damn proud when he finally beat 50 reps with 225).

Pete benched and inclined on day 1, and then did overheads and lots of rear delt work later in the week.

As Pete broke his 350 records and got stronger on overhead work, his bench moved.  He stuck with all the paused work, and his bench rose from the low and mid 300's to eventually hitting a paused 415 months later.  Yes Pete gained weight during this process, however when he was benching in the mid 300's before he was at a similar weight.  So the weight gain was the main factor.

This is what everyone will have to do throughout their training life in order to make progress.  You start with a staple, then make a change here or there, to see what happens.  You don't make huge wholesale changes when things go into the shitter.  If you plan your training around solid principles and theories, then you shouldn't have to rearrange everything in order to move up again.  You make small changes, to see how they affect your training, and go from there.

Most movements will eventually get tapped out in terms of effectiveness at building the main lift.  When Pete felt like inclines were no longer serving him as well, he replaced them.  He then concentrated on dips, but kept military in.  This is solid, and a reason why Pete's bench continued to rise.

I don't take full credit for Pete's massive progress on bench, however I take credit for helping to get him moving in the right direction and giving him some principles to build around.  This is why a training philosophy far outweighs "routines".  Routines are just that.  Routines.  Principles and ideologies BUILD the routine.  Not the other way around.

I'm ridiculously proud of Pete, and I know he has room to grow yet still.  I can see a 450 bench coming from Pete in the next two years.  Something that just a year ago, didn't seem possible.  However what Pete will realize is, going from 400 to 450 will mean a new learning curve as well.  Just as getting from 350 to 415 required one.

Hopefully, he will listen to 50% of what I tell him at least 82% of the time.  I think that's about how it all worked out over the last few months, and he did "ok".