Woke up this morning and had coffee with Daine McDonald.  Daine runs http://cleanhealth.com.au/ and is actually the guy responsible for the Poliquin/Klokov seminars.  Lucky for me, Charles essentially set Daine and I up on a blind date last night for dinner.

Klokov joined us this morning for coffee and a short time after we all met at Kitchen 73 for breakfast (where we have been doing every morning since I got here). 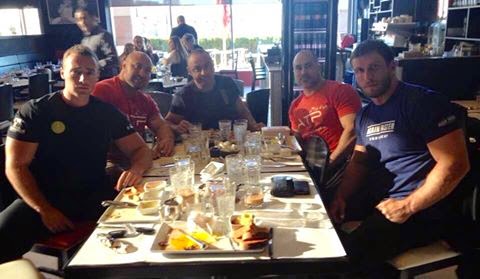 Then he proceeds to order a stack of pancakes covered in powdered sugar, an omelette, four slices of toast, and fruit.

When we arrived in Atlantis, Dmitry went through his snatch workout then everyone headed upstairs to listen to Charles do lecture.  Klokov asked me if I wanted to train, so of course I went to train with him.  He looked around at the gym for a while and said to me "I don't understand all the machines."

"You mean you don't know how to use them or you don't like them?" I said.

Then we proceeded to do some bench.  Nothing heavy.  Dmitry did a bunch of sets with 225 and I worked up to 365 for a few sets.  My elbows have been killing me since I landed and travel usually makes my joints feel pretty irritated for a while.  So I haven't been able to get in any real good sessions since I've been here.  But that's par for course and I knew that would happen.

After we were done we went upstairs for the lecture, and I have to say, it's amazing how much shit Charles knows about strength, speed, power, and how many ways he measures it and can test it.  The best thing about learning more, is that you realize you don't really know a whole lot.  In all the seminars I've been to and all the people I've listened to, Charles easily has impressed me the most.  The amount of data he knows and has collected over the last three decades is amazing.  His knowledge about training is unsurpassed by anyone I know or have ever known.

After lecture we all grabbed some lunch, then headed back where Dmitry went over several positions of the snatch for everyone.  Dmitry is a very hands on guy, and the thing I was most impressed with, as I told Daine, was that he gave each individual so much personal attention.  Sometimes when you attend these seminars you see guys get treated with a bit of the "eh, you're a nobody syndrome".  That's the antithesis of how Dmitry worked with people.  The amount of passion and energy he gave each person would have made you think they were all preparing for the Olympics.  It was really impressive to watch.

After we loaded up all of the bumper plates we headed back "home".  On the ride in I tried to tell Dmitry some American jokes, none of which resonated with him at all.

"What's red and bad for your teeth?"

He finally told me, "In Russia, we tell more like dark jokes or really dirty jokes."

Then I remembered that a good friend of mine who was from Russia told me a great joke, so I hit him up with it.

"An old man with a knife was dragging a little boy into the woods as it neared dark.  The little boy screamed, "please mister don't!  I'm so afraid!"  The old man looked at the boy and said, "You're afraid?  I gotta walk back alone.""

This made him laugh.