This past weekend (8/16/14), I made last minute decision to enter Crystal Coast Strength and Conditioning's quarterly SPF Powerlifting meet to benefit Hope For The Warriors . Four times a year we host an SPF sanctioned powerlifting meet and donate the proceeds. It is always a tremendously fun and inspirational event for the community. Our meets always feature a wounded division in addition to our normal military division and all other standard divisions. 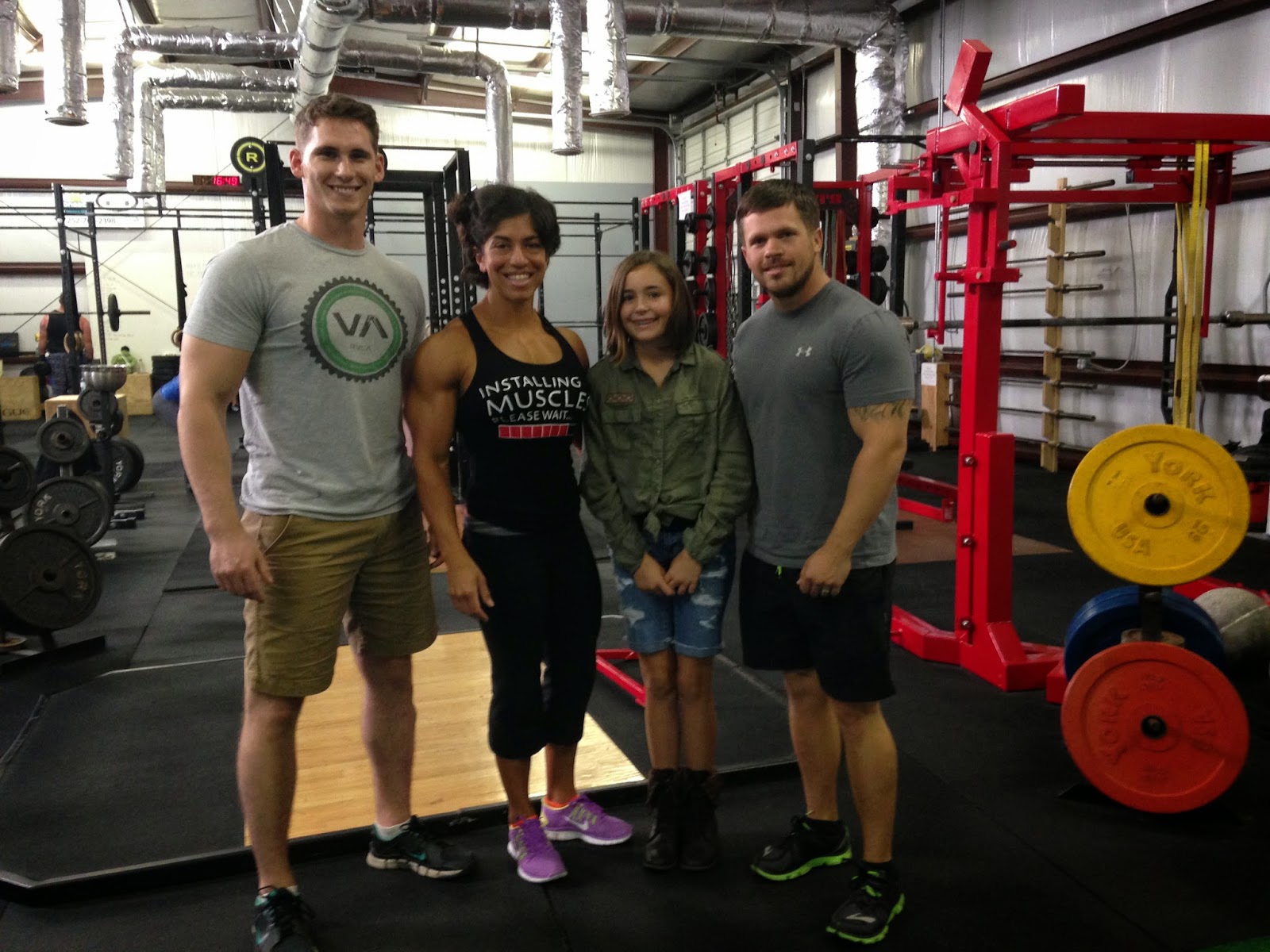 At weigh in's I met a wounded young Marine, Dekota Frear, who sustained a combat related gunshot wound to the leg in Afghanistan last year. This was going to be his first meet coached by his friend and fellow lifter Joshua Farrell. Something about these young men struck a chord with me and I decided that I could do more to get the word out there. My goal by choosing to enter was to raise additional funds and awareness for Hope for the Warriors by asking friends and spectators to sponsor me a penny per pound lifted in my total. The mission of Hope for the Warriors® is to enhance the quality of life for post-9/11 service members, their families, and families of the fallen who have sustained physical and psychological wounds in the line of duty. Hope For The Warriors® is dedicated to restoring a sense of self, restoring the family unit, and restoring hope for our service members and our military families. I have been committed to Hope For The Warriors® since my husband introduced me to the founder of the organization in early 2009. Hope For The Warriors® was founded by military wives in 2006 as they witnessed, firsthand, the effects of the war on service members and their families. Hope For The Warriors® remains grounded in family values as the organization expands both the span of programs offered and the number of wounded, family members, and families of the fallen assisted.


"The leadership of the organization remains in the dedicated hands of military family members. Together, our board of directors, staff, and volunteers work tirelessly to serve those who have sacrificed so much. The integrity of our organization is paramount and therefore our representatives are as honorable and noble as our mission and the people we serve." - H4W 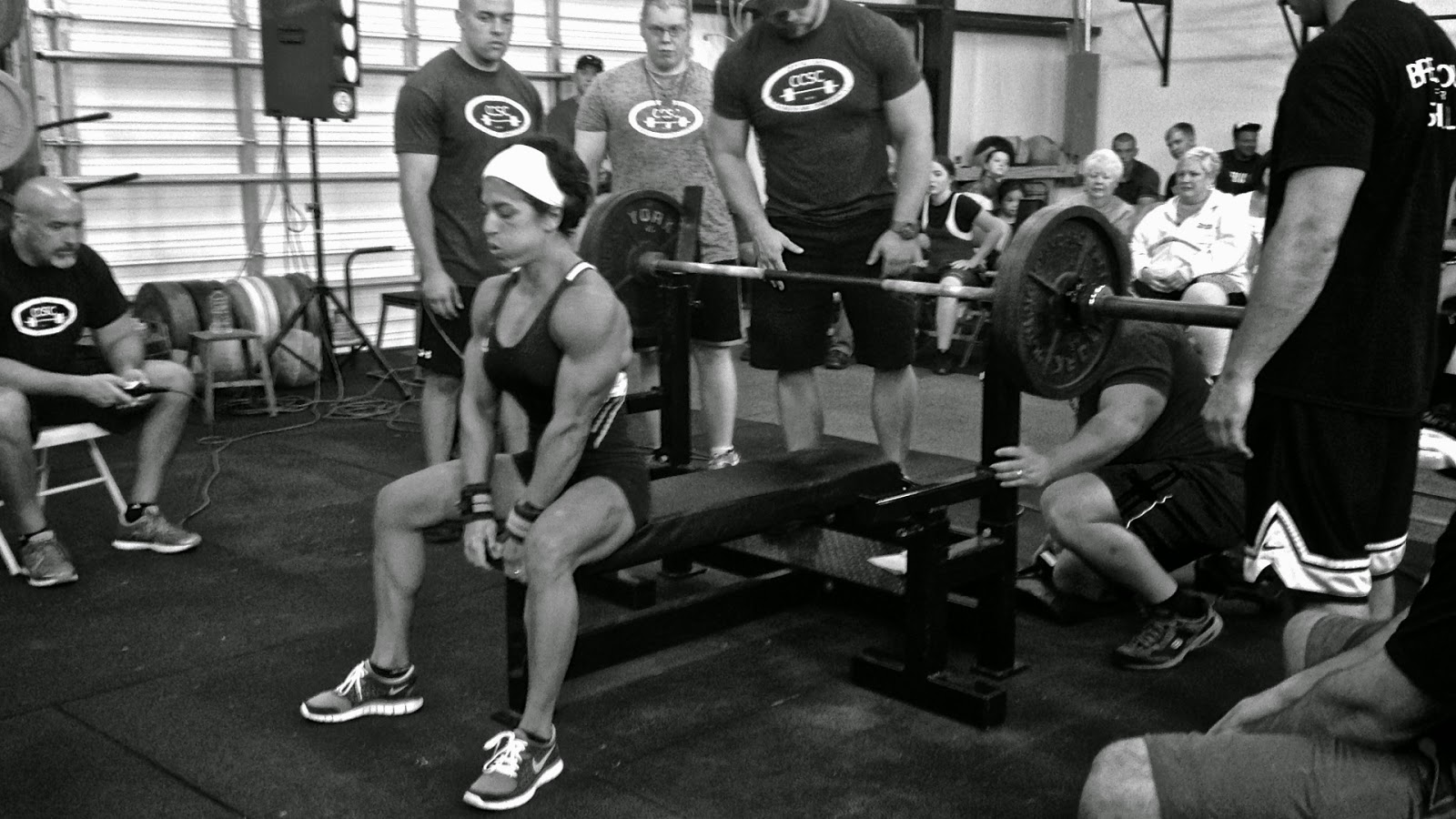 I competed in the women's raw 132lb push/pull division. This was my first meet ever competing as a 132lb class as I normally compete in the 148lb class. For those of you following along I am currently lass than two weeks out from the IFBB North Americans where I will be competing in the women's physique division. I am currently in a state of severe pre-contest caloric deprivation and not training like a powerlifter getting ready for max effort lifts. I decided that it didn't matter. What mattered was the reason for doing it. My actual performance, while still important to me, was not the priority. I chose to not compete full power because I had squatted and had a difficult lower body training session the previous afternoon. I decided that the risk of injury was not worth it. My actual weight the morning of the meet was 129lbs. My normal powerlifting bodyweight is around 150lbs.

My meet goal was to set a new SPF World Record in the 132lb class, bench press a minimum of 2x my body weight and deadlift at least 3x my bodyweight. I accomplished the goal of breaking the SPF World Records for the bench, deadlift and push-pull total but fell slightly short on my numbers. I only took two bench attempts with 250lbs being my second attempt. I passed on the third as the risk of injury seemed high as I was unprepared for the type of stimulus in my weakened state.


On the deadlift I opened with an easy 365 lbs which under normal circumstances would be my next to last warm-up. I made the decision to take 405lbs next which is ordinarily my last warm-up set. I missed this attempt as I just didn't have it. This was very humbling. In my crazy mind I assumed that despite a 20lb loss of bodweight, 12-15 hours of aerobic work in addition to my lifting per week and the home stretch of a pre-contest diet that I could still lift what I would well fed and rested at 150lbs. Lesson learned - the same rules that apply to everyone else apply to me too. I had a bad feeling when I went to put my belt on and I had shrunk 3 belt holes since that last time wearing it. Had I been able to step outside of my ego, I should have called for 390lbs on the second attempt. This would have been a 3x bodyweight pull and met the goal. I got greedy. I'm human.


All in all the meet was a tremendous success. We had lots of PRs and records set and some people accomplished things they never thought possible. If you would like to make a donation to Hope for the Warriors® you can click here http://www.hopeforthewarriors.org/category/240163/donate-now

This past weekend I was privileged enough to be asked to have my own booth at the Quad City Strength strength expo in Davenport, Iowa.  A first year event that would feature some notable names such as Capt. Kirk Karwoski, Worlds Strongest Man Brian Shaw, IFBB pro Fred Smalls, and Odd Haugen. 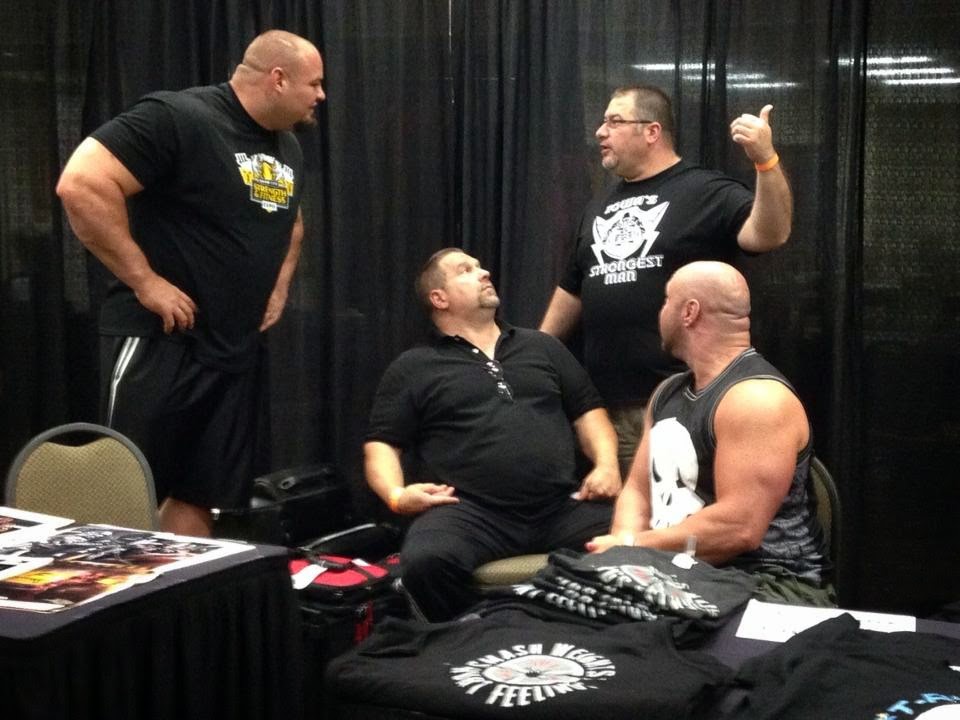 I've known Kirk through the net and over the phone for a while now, but unfortunately we've never had the pleasure to meet.  One of the biggest reasons I agreed to drive up was to hang with Kirk.  When I made the transition into powerlifting Kirk was the guy I really looked up to the most.  His intensity and his drive was very inspiring to me.  Not to mention he was jacked and yoked to hell.  All things I could identify with.

So when I found out Kirk would be there, I knew I would be in for making this trip.

Lucky for me, Brian Shaw, 2X world's strongest man was there as well.  And let me tell you, he's literally the largest human being I've ever met.  I've been around Derek Kendall on several occasions and I can tell you this...Brian makes Derek look like a small child.  And that's no disrespect to Derek at all.  Brian's arms are as big as Derek's legs.  And Derek has legs like people.

I also had the pleasure of hanging with Fred Smalls, who was incredibly nice and we spent much of the afternoon and evening chatting about a myriad of subjects.  Fred is in prep for the Mr. Olympia so he had packed all of his food with him.  And was so strict that he came to dinner with us and brought his food with him.  I've said for a long time that bodybuilders have a dedication powerlifters know nothing about.

Hanging with Kirk was a laugh a minute.  I can't repeat all the shit he said and stories he told but let me tell you, if you ever get to know the man personally he'll keep you in stitches. 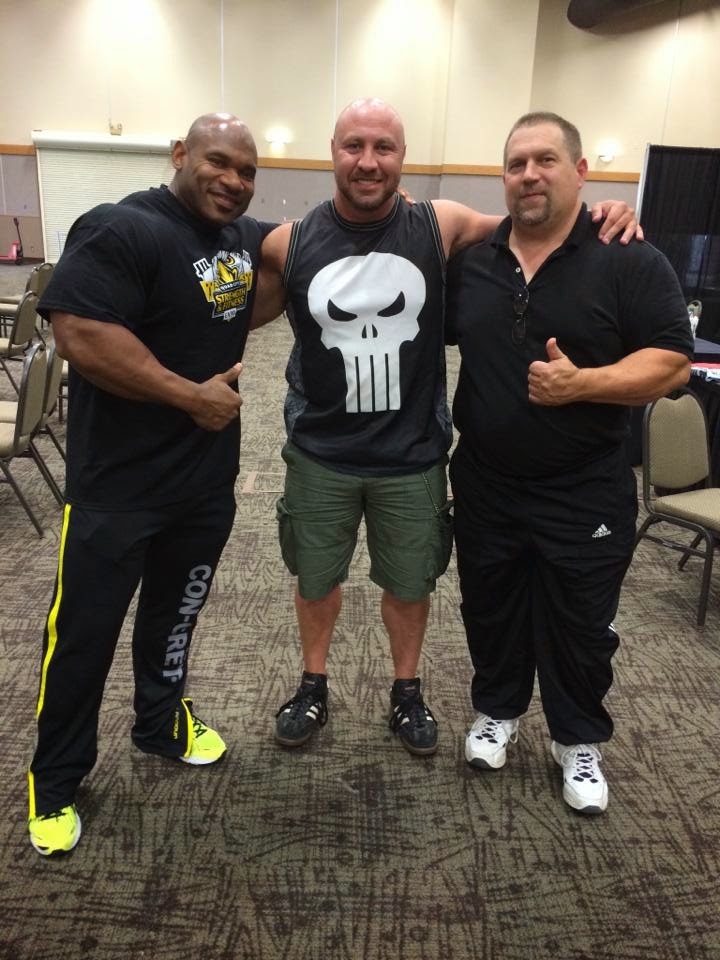 The expo itself consisted of a powerlifting meet, a strongman contest, some crossfit stuff, and mas wrestling.

Mas wrestling is actually really cool to watch.  Rather than try to explain it, I will just attach a video so you get the idea.

Had a great time meeting everyone and hanging out with guys I have a ton of respect and admiration from.  I hope this thing continues to grow and that next year it can be even bigger.