It seems like when people talk about building glutes you can't get past finishing the word "glutes" before someone immediately interjects "squats" as the answer.

Apparently, if you want to develop your glutes, squatting is the alpha and the omega of developing the glutes.  I mean it has to be.  I've read it on the internet more than a million times.

And yet, I personally know, have trained, and talked to lots of people who did squats religiously that did not develop big glutes from it.

"Blasphemy!  There's a whole "yeah, she squats" page that shows all these great asses from worshipping in the squat rack."

Ok first off, a lot of those asses that I've seen are on women that don't look like they train at all.  And second, it's actually a myth that squats are the be-all end-all of glute developers.  If they were, then everyone who squatted properly, would develop an incredible ass.  Yet as noted, I've known lots of people who are great squatters, or squat a lot, and don't have incredible glute development.

There are a few factors here to consider about squatting and getting no ass.

Everyone can build their musculature into "more" of what they have.  However there will be a limitation on how big certain musculature can grow, based on the number of fibers that the area is comprised of.  If you look at bodybuilders across the board this should become apparent.

It should be evident that Arnold, regardless of how he trained, was going to have a massive chest.  And what was Arnold's favorite chest exercise?  The bench press of course.  He loved it.  He said it built a big, massive chest.  Yet there are lots of bird chested bench pressing mother fuckers out there.  So why can't they lay down on a bench, and press the bar like Arnie did, and get some big ass chesticles?

Everyone has a unique make up of muscle composition in their body.  I probably have a greater than average number of fibers in my delts and calves than the average joe.  As I do very little work for them, and they grow quite easily and stand out fairly well compared to my other bodyparts.  On the flipside, my chest is not very big despite years of bench pressing (and doing so correctly).  My delts always jumped in and took up a big part in benching.  It's also the reason why overhead pressing came easy to me.

So the reason why not everyone can lie down on a bench and build a huge chest (or one of the reasons) is because they may just not have enough fibers in their pecs to build a massive chest.

From a purely anecdotal perspective, I have noticed that taller people tend to have less glute development, even in lifters, than short women or manlets.

So the bad news is, if you are having trouble building a big set of glutes you may just fall on the end of the spectrum with people who don't have a lot of ass muscle to build in the first place.  So you can probably hang up ever having an ass like Eva Andressa. 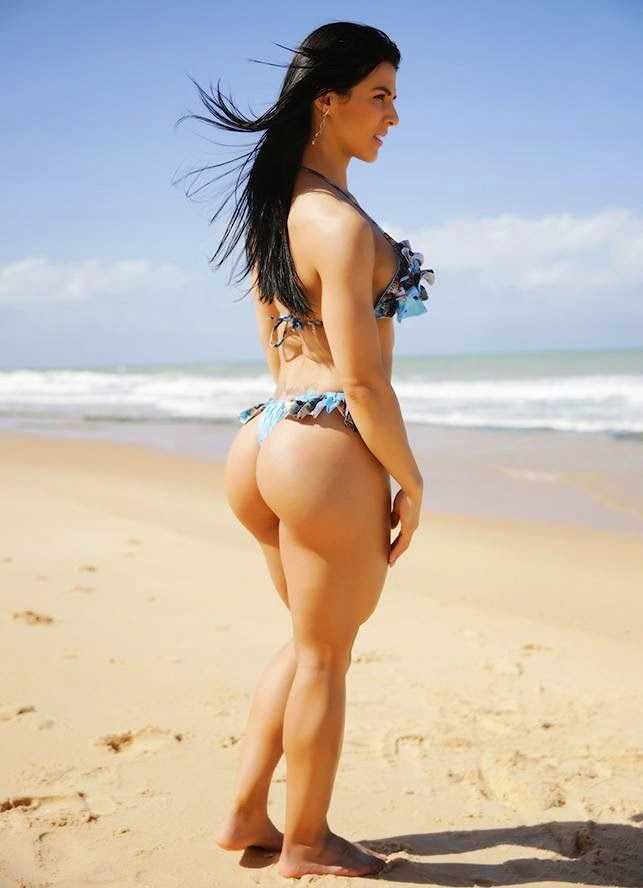 The good news is, as usual, you can still improve on what you have through proper training, and put some junk in the trunk.

2.  You may not have learned how to fire your glutes yet

I've read that if you squat, that no matter what, your glutes are going to fire.  To a degree, this is true.  The glutes are indeed going to be engaged, however the degree to which they are engaged is largely dependant on your ability to actually "feel them".

I believe there is a massive advantage to getting to a place where you actually develop that "mind muscle" connection, and can actually make the muscle do the work, rather than move the weight through space.

Moving weight through space is exactly what it implies.  Your concentration is more on getting the weight from point A, to point B.  Making a muscle do the work is more about feeling it stretch and then contract against the resistance, and the weight being used is mostly secondary.

Dave Tate made a beautiful note of this when he wrote about his evolution in training and talked about the time he spent in bodybuilding.  Mainly, that he didn't have an adequate mind to muscle connection to actually build certain parts of his body.

Whenever I pissed and moaned about seeing my poundages plummet, Rick would remind me that the muscle doesn't know if it's pushing or pulling 400 pounds or 40 pounds; all it knew was if it was getting trained or not.

At first I had a real hard time with this, but after a while it was cool to see how I could absolutely destroy my chest with 70-pound dumbbells when before I was blasting away with the 150s. And I started to grow, big time.

Suddenly, I had biceps, triceps, hamstrings, and calves. My chest started to get shape and I could finally feel my lats working during chin-ups, pulldowns, and rows.

I do believe that from a top to bottom standpoint, that overload and progression are going to be the two biggest factors in building more OVERALL mass.  However when we are talking about isolating an area to develop, you have to be able to consciously make that area fire during certain movements.

Gillian, for example, can out squat a lot of men.  She squatted 400 in competition at 148.  Glute development?  Severely lacking.

You may need to spend time just learning what it feels like to get your glutes to fire when performing certain movements.  A very simple way to start this, is to actually just contract your glutes for sets of 10 at various times throughout the day, and hold the contractions for 3 seconds each.

3.  You are relying on the squat too much

The great majority of people who have great glute development don't "just squat".  They do lunges, step ups, good mornings, deadlift variations, ass machines, and use other machines not meant to be ass machines and turn them into ass machines.

If you watch any video made by the women competing at a high level in figure/fitness etc, that have great asses, they tend to do a myriad of movements for their glutes.

This should be no surprise really.  A limited number of lifts are going to give you a limited amount of development.  The people who tell you that just squatting, bench pressing, and deadlifting will garner you a great deal of development are really speaking a half truth.

Yes, you can get incredibly developed from just doing those three things.  However you will not maximize your overall development by being so limited in your movement selection.  If someone told you that they would give you a million dollars if you added an inch to your calves in one month do you think you'd just do one calf movement and think that's enough to maximize growth?  Probably not.

So relying on the squat for completely glute development is probably not a good idea either.

4.  You're not built for squatting as a glute developer

This will irritate some people as I've read many times that everyone can squat to build leg and glute mass.  And for the most part, this is true.

However it's not true for everyone.  If squatting was the single answer for lower body development, then professional bodybuilders would just squat, and shit would be taken care of.  However, even Tom Platz, who was more properly built for squatting than possibly any bodybuilder ever, did other movements outside of squats to further maximize his lower body development.

Dorian Yates figured out a few years into his career, that he just didn't get the quad development from barbell squatting that he wanted.  So he switched to smith machine squats (yes I know, blasphemy to some), put his feet more forward, and was able to more effectively target his quads.  And guess what?  They grew.

It's very possible that due to your own leverages, squatting may not be the best movement for you as a glute developer.  If you have been squatting religiously and efficiently (from a technique standpoint), and you know how to engage your glutes in other movements, then it's possible that your leverages may mean squatting isn't a great choice for you.  If you don't plan on competing in competitive powerlifting, then don't squat.  I know, this article is filled with blasphemy but sometimes the truth is hard to swallow.

5.  You don't know how to squat correctly

I probably could have put this first.

I see so many people that don't know how to squat correctly that I wonder how they ever squatted more than a plate.

A very big misconception in lifting and physique development, is that if someone can lift X number of pounds, then they have to know what they are doing.

This is a complete lie, and based on ignorance.

I have two friends who both deadlifted 750.  Incorrectly.

By incorrectly, I mean that they were absolutely in some of the worst possible leveraged positions to deadlift.  Both of them are capable of deadlifting 800 pounds if they fix their issues, and both have recognized that their technique was wrong, and are working on it.

Just because someone is strong, or relatively strong, doesn't mean they know what the fuck they are doing.  It also doesn't mean "it works for them".  It may be working against them!  I read this all the time on the net and it's a pile of bullshit.  Lots of people are strong, but limit themselves by using poor technique.  So no, it doesn't "work for them" and just because they can move X amount of weight doesn't mean what they are doing is "correct."

I see people teaching the squat incorrectly all the time, and they never get checked on this.

This makes me cringe.  So you want to purposely put yourself into a position that looks like lordosis, then load the top of your spine with a heavy weight, and squat it like that?

If you don't fix your squat technique so that you distribute as much of the load as possible across the lower body, then it probably means you are doing something wrong.

Do you get bent over?  This means you're not stabilizing correctly through your core.

Do you have excessive "butt wink" (where your glutes tuck under you at the bottom)?  This relates to core stabilization as well. 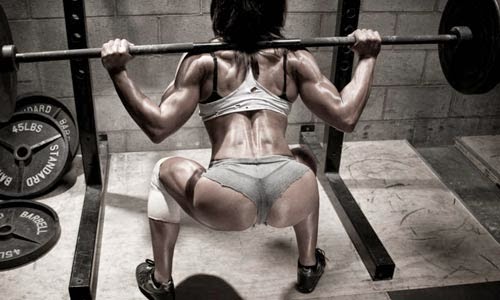 Are you cutting your squat high?  This means you are hip locking in the squat, and the glutes aren't getting carried through a full range of motion that the squat can provide.  If you watch someone that does know how to fire their glutes, and doesn't have excessive butt wink, and does do full squats, you will see that the glutes become VERY involved at the bottom of the squat.  This doesn't mean you have to put your ass on the floor, as the exaggeration goes.  It just means to do a FULL squat.  Not cut your ROM high (above parallel).

Follow LRB on IG - http://instagram.com/liftrunbang
Posted by Paul Carter at 10:20 AM