Your passion is their pain

“All my life I've been fascinated by the precipice in all of us. When you come to it, you either choose to fall or you don’t -- Alvin Ailey” 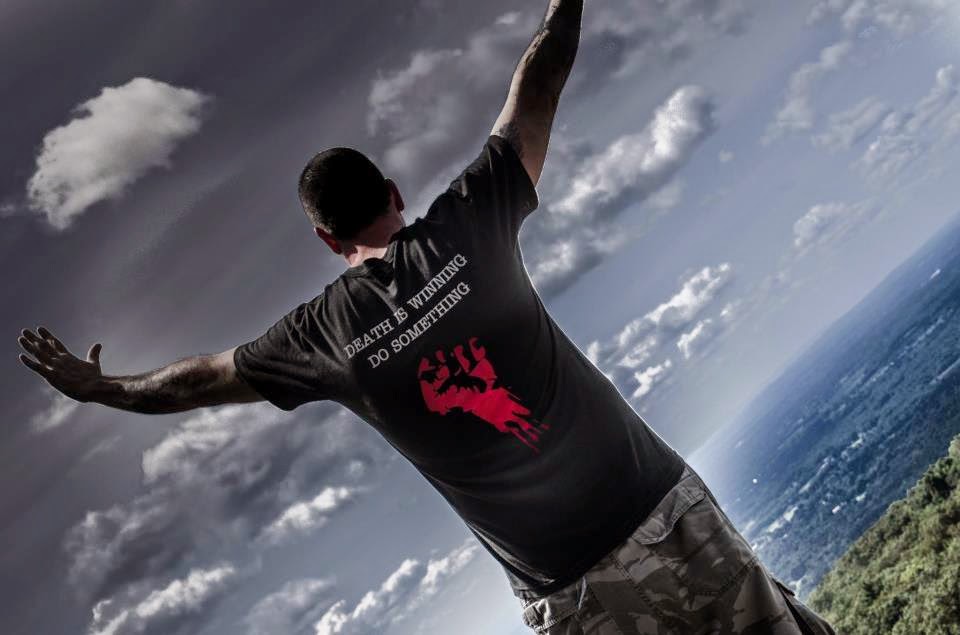 You can do something a million times, and forgot most of them.  But you'll never forget your first of them.

I don't know how many football practices I had in the hot Mississippi summers.  Quite a few, I reckon.  I don't remember most of them.  In fact, sitting here thinking about it, I can barely recall any.  But I remember my first one like it was just yesterday.

I was in fourth grade.  The division I played in was made up of fourth through sixth grade, or "pee wee" football as it's known by some.

A few weeks before practice my dad had taken me to this guys house who had a son that was quite a bit older than I was.  He didn't need his helmet and pads anymore and my father was going to buy them from ol boy.

After said purchase, I remember putting this giant can on my head wondering how in the hell I was going to run with it on.  Same for the shoulder pads.  They clacked up and down with every step I took and were incredibly cumbersome.

Much like having a gun fight, what football looked like on TV isn't what it felt like in real life.  On TV it looked cool, and bad ass.  Dudes flying around, snot lockering each other, catching passes, sacking the quarterback, scoring touchdowns, banging strippers.

This felt well....not cool at all.  I felt like Robocop had banged a bobblehead doll and boom...there I was.

Already, football seemed very uncool, and I hadn't even taken the practice field yet.  I was just wearing some pads and a helmet and golf was sounding good right about that time.  But hey, I lived in Mississippi.  And in Mississippi, if you're a male, you're probably going to play football.

When the big day rolled around, and I would get my first taste of practice, I was scared shitless.  I remember walking onto the field and seeing the sixth graders.  They looked like giants, and gave me a thousand yard stare only a Nam vet could appreciate.

Yes, I'm exaggerating for comedic effect.  But I do remember them seeming so much larger than us puny fourth graders.

Anyway, practice began and I did my best to hide as much as possible during "hitting" drills.  I watched fourth grader after fourth grader get obliterated and destroyed by the much larger sixth graders.  It was a massacre to such a degree that Pol Pot would have been pleased and offended at the same time.

Eventually, hiding would no longer save me from such brutalization.  The coaches called for a drill called "bull in the ring." 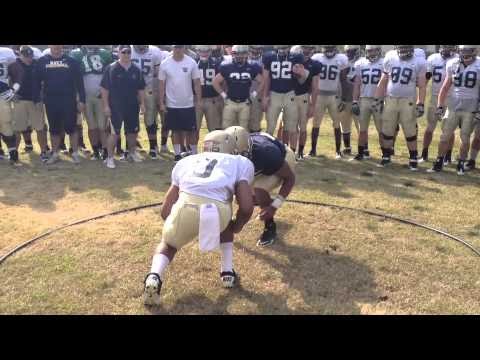 Apparently, "bull in the ring" is banned now because I guess....I don't know.  It toughens you up?  Puts some hair on your chest?  Makes you stop being a little bitch and separates the "men" from the boys in fourth through sixth grade?  I'm sure someone will pipe up with why it is banned and defend the banning of it.  They will then log off the internet to go wash their girlfriend's poodle for her.

Nevertheless, we were playing that shit back then.

Bull in the ring means there is one guy in the middle of a circle.  Everyone in the circle has a number.  When your number is called, you have to run full speed and crack the dude standing in the middle of the circle.  Basically, it is in fact, a "harden the fuck up" drill.

Well I was very marshmallowed at the time, so this did not seem like a fantastic idea to me.

When my number was called, I don't recall how fast I ran, or how hard I hit.  But going off of my father's reaction, which was to literally drag me off of the practice field, throw me in the car, and start driving me home, I bet money I wasn't Lawrence Tayloring out there.

Before we got home my dad pulled off to the side of the road and turned the car off.  He turned around and looked at me and told me "I'm going to finish this drive home, unless you get your ass back on that field and start hitting like it matters to you."

I wiped the tears from my eyes and nodded at him, not saying a word.  He turned the car around and drove me back to the practice field.

When I stepped back onto that grass, my demeanor from the time he threw me in the car until the time I got back, which could have only been a few minutes, was like night and day.

Mainly, I was fucking pissed.

My fear had been exposed for everyone to see, and I was thoroughly embarrassed.  But I was really fucking pissed off at my dad for doing that to me in front of all my friends, teammates, and coaches.

So someone was going to pay.

I got back in my spot at bull in the ring, and this time when my number was called I ran with every ounce of fury and hate my fourth grade body could muster up.  I decleated the guy in the middle, and was greeted with "ooooohhhhh!!!" from my teammates.

I walked back to my spot and couldn't wait to be called again.  And I was.  Several more times.  Even against the sixth graders I at least held my own.  My fear had been replaced with anger, and determination.

But something else happened in those brief moments as well.

I realized, I liked that shit.

I liked hitting.  I liked getting hit.  There was something about it that is hard to put into words.  The joy of running full speed into another mother fucker and testing yourself against them was very rewarding.  Even if you lost, you would get a chance to try again.  There were only temporary failures.  And through those failures, you learned how to hit better, harder, meaner, faster, and smarter than the last time.  And eventually, you won far more than you lost.

Whatever it was that separates the guys that are on the field from the guys picking splinters out of their ass had took with me.  I wanted to be on that field.  I wanted to hit.  I wanted to catch passes and score touchdowns and help my team win.

I had such a moment shortly after I started lifting as well.

The first few weeks I was so ungodly sore that I would often wake up partially paralyzed.  And I hated it.  But because I was living with my martial arts teachers parents, he forced me to go to the gym everyday and train with him, pretty much against my will. 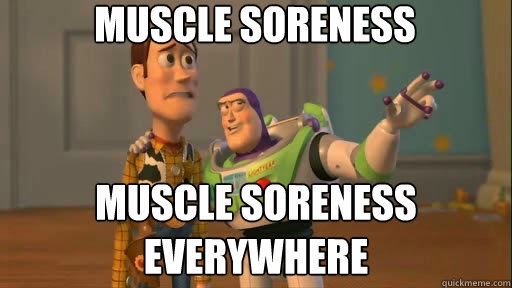 A few weeks in however, I was joking around with his mom in her kitchen and I ended up flexing at her, and for the first time in my life, I saw a god damn muscle.  It was a bicep.  I can remember being that age and seeing other young dudes flexing, who were far more genetically gifted than I was, and being envious that my shit just was not there.

But it was now.

That was 25 years ago.  Still clanging and banging.


I think eventually, if you ever really want to exceed your own expectations at something, it has to take.  Even if not at first, it has to take.  You have to find yourself at that cliff, and either you make a choice to fall, and succumb to a passion, or you walk away from it because you feel like the fall just isn't worth it.

Such was football for a while with me.  Such was music.  Such is lifting, and writing.

When something takes, you find yourself enjoying all of the misery and discomfort that often comes with it.   I am aware of a lot of bodybuilders that actually enjoy the process of dieting to get ready for a show.  While others, who don't seem to do quite as well, hate it.  They hate the starvation and the feeling of being zombified for weeks on end.  But for some reason, others do fine with it, or even enjoy the misery of it all.

If you don't enjoy the feeling of a very heavy barbell on your back, then powerlifting is probably not for you.

If you don't enjoy getting punched in the face, you probably aren't going to end up being a great boxer.

Yes, there will be exceptions, but that's why we call them exceptions.  For the "rule", these things do apply.

If you don't enjoy a throbbing, sore ass hell thumb, then Xbox Call of Duty championships probably won't be in your future. 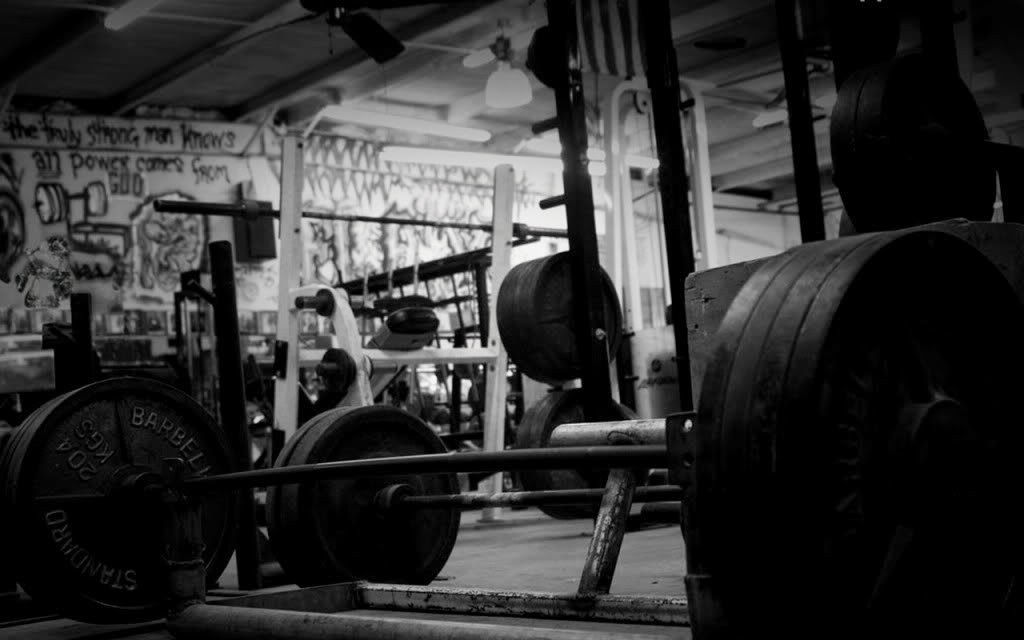 And these are the things that end up separating the guy who goes into the gym that just wants to "look good for the chicks", and the brute that makes heads turn when he starts loading up the bar in the squat rack.  I'm not disparaging the former for the latter here.  I'm saying there is a difference in mindset, and the acceptance of pain and misery as part of the process with one person, where there is not with the other.  One is going to require a lot more mental fortitude than the other.  Because reaching places where others do not get to go, or fear to tread, is not for the faint or weak of heart.  It is for those who embrace the awfulness that manifests itself during that fall from the precipice.

I've long said and truly believe that going through the motions doesn't and will never produce the kind of results that you see from someone who truly loves what they are doing.

The person in the gym that is going because "it's good for my health", but really doesn't enjoy or love being there, will never truly enjoy the results they could have, if somehow they actually learned to love it.  To embrace the soreness, the straining, the aches, and pains that come with real effort.

To those of us that do embrace it, our passion is their pain.  And that pain is our passion.

When I suffered my first bicep tear, it was during the start of the second quarter in a semi-pro game.  The fullback came through the hole and I lit him up.  But in the process of it, my arm was bent and hit his shoulder pad, tearing the tendon off the bone.  I finished playing that quarter and only sat down when I realized being on the field and not being able to fully tackle was a liability to my team.  Had I learned a technique to tackle with one arm effectively, I'm pretty sure I finish the game and that season.  However, surgery was required at that point thus my season was over.

With my arm in a cast, I couldn't do a lot of upper body lifting, so I decided that squatting everyday was a great idea.

People who don't love these things in that kind of way, look at me squatting with a cast on my arm as stupidity.  Maybe we are stupid.  Maybe people who are in relationships where they do awful shit to each other, but somehow find a way to keep loving each other enough not to quit, are stupid too.  I don't know.

What I know is, when something takes, it will engulf your life and fulfill it in ways that make it easy to dig deep down, to find a way to press on.  To push past the anguish and pain, because well, you love it so bad it hurts.

And if that's stupid, then stupid is as stupid does.