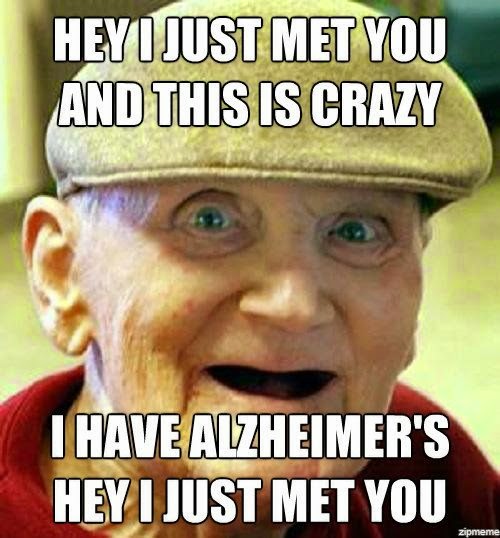 I laughed.  I thought it was funny.

I also cringed slightly inside because I knew I could very well strike a very sensitive nerve with someone who might have a loved one that is suffering from Alzheimer's.  Sometimes the internet makes us walk that fine line of deciding what we think is funny, and what we think is offensive.  I knew this would be one of those times, but decided to anyway.

Luckily, people laughed and weighed in on the fact that the people they know and love that do suffer from Alzheimer's would probably have thought it was funny too.

My mom was a nurse for a long time and worked in nursing homes and because I know her sense of humor (it's quite off the wall), I knew she would have thought it was funny as well.

As life would have it, I found out on Father's day, that my mother had been diagnosed with Alzheimer's.

To be honest, I wasn't shocked at first.  The last year or so when I would call the conversations would often drift into subjects about things that had happened years and years ago as if they had just happened.  I went along with it, and did my best to enjoy the conversation.  But it was strained at times.  And painful.  I had my suspicions that something was wrong, and that Alzheimer's might be the culprit.  However I never said that aloud to anyone.  I don't know that I ever even fully said it to myself.  It was more or less a "could be..." kind of acknowledgement.

I was headed out the door to catch a plane to Tucson when my father told me.  I was upset about it of course, but certainly not in hysterics or a sobbing mess.  I felt sort of numb about knowing.  It's that feeling of suspecting something, but then getting confirmation about it.  You may have had a feeling about it before, but once the truth is given to you in full, your feelings do change.  Knowing always changes things, regardless of suspicions.

As I sat on the plane and all of the distractions of traveling subsided and my mind was allowed to ruminate about it, I did start to cry.  I gave no care in the world who saw that.  My mom is the most special lady that has ever existed in my life.  And I started thinking about my life with her and all the things we shared and had been through together.

I thought about when I was younger, and playing grade school football.  They used to video games with those camera's that held VCR tapes in them, and one day as we were all watching game tape, I could hear my mom yelling in it.  Her voice shrieked over the top of everyone else's, and the shit she was yelling caused me and my teammates to laugh.

"That's right son, put him down.  PUT HIM DOWN!" she would yell as I destroyed some ball carrier.

It was hilarious to me because, my mom is such a warm and considerate person.  My mom loved hugging people and gave the best hugs ever.  Nothing in my life made me feel more comforted than her putting her arms around me and telling me she loved me.  For a tiny little woman, she radiated an enormous amount of love and tenderness.

So it was hilarious for me to hear her shouting such words on video in regards to a football game.

As life moved forward, her attitude and support for me always echoed such sentiments.  She supported me in playing music, and bought every drumset and cymbal I ever needed.  And unlike most parents, my mother never bragged on my abilities to her peers and cohorts.  She always saved her praise for me.  And that made it very special to me, because it was something her and I shared together.  Not something she could share with someone else in order to prop herself up via my achievements.  A lesson I have held with my own kids, as I seldom mention their accomplishments to others or write about them, unless I just can't help myself. But for the most part, I keep those things between me and them, just as she kept them between her and I.

When my best friend was killed and my parents split, I left with her.  And I watched her work 12 hour shifts while finishing nursing school and graduating at the very top of her class, making the "who's who" list of academic excellence.  She not only provided, but excelled and thrived in a time of great stress and struggle in our life.  Her incredible work ethic was something I always held in great admiration about her.  She was a "never quit" kind of lady.

My mom knew it was just as important to be a "do as I do, and as I say" kind of person.  It's not enough to know all the right things to say, and all of the right ways to walk a path.  It's of utmost importance to actually do all the right things, and walk all the right paths.  Or at the very least, do your god damn very best in that regard.

The summer after my parents split, I pawned my drumset and left for Albany, Oregon.  I spent that time training in martial arts, and started lifting weights.  When I came back and expressed to my mom how much confidence and self esteem that lifting had given me, she asked me "well then we need to find a gym for you then, don't we?"

And until I left home for the military when I was 21, she always paid for my gym memberships, and protein powder, and everything else I needed.

Some people would say "you should have paid for that yourself."  But the thing was, even when I was working and had money, mom WANTED to pay for those things.  Because to her, it meant she was investing in me, and she wanted to be a part of those things in my life.  It was always that way with her.

And I thought about all of those things as I sat on the plane in tears, coming to grips with the fact that, there would be times when all of those things that she had done, and all of the hardships we had supported each other through (which were numerous), might get lost, and be totally forgotten.

And I was scared.

I was scared thinking about how it might feel when I see her, and she responds to seeing me with "who are you?"

Maybe that won't happen.  I don't know.  But it crossed my mind, and it made me feel more helpless than I've ever felt in my life.

And then I thought what if I get lost?  What if she gets to the point where she never knows who I am?  What if it's as if I never existed and all of those things that were a part of me, are no longer a part of her?

What if she forgets about the time that I crawled into that big cabinet in her antique store, pretending I was Dracula getting into his coffin, only to have it toppled over shooting me out of it onto the concrete floor where I split my knee wide open.

What if she forgets about pushing me on that tire swing in her Father's back yard when I was just a little man?

What if she forgets about the time she practically saved my life when I had Rocky Mountain Spotted fever and rushed me to Columbus Air Force base, driving eleventy billion miles an hour in a rickety old car that I'm surprised didn't explode on the way there?

What if she forgets about the time when my dad decided I needed a haircut, and then botched my shit up, only to come home and fix me up so that I didn't look like I had lost a battle with an out of control weed eater?

What if she forgets about all the times when I used to visit her at the nursing home when she was working nights?  That we were so close I'd rather have been there spending my time talking with her, than getting drunk and chasing women.

What if she forgets about the time when I saved up my money to buy her that new pair of nursing shoes because she never put herself first, and would never spend the money to buy a new pair?

What if all of that gets lost somewhere and she can never find those things again?

Because those things aren't just a part of me, or her.  But a part of who we were together.  And if that gets lost, then so do I.  So do we.

And the only phrase that came to my mind, in the most desperate of voices was...."mom, please don't lose me." 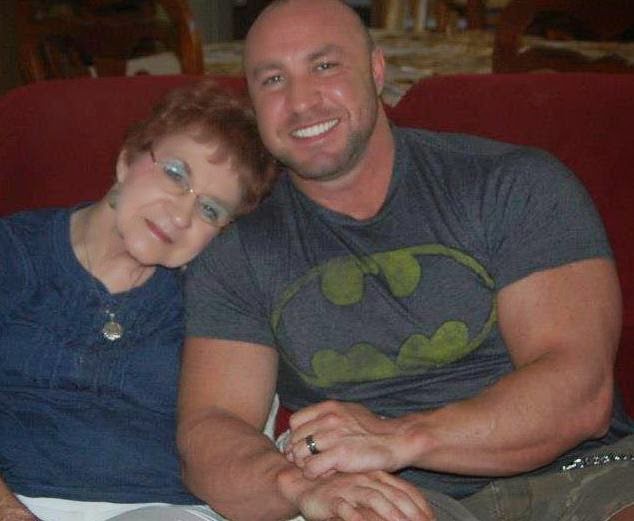