"I was as strong as you at one point."

I could go on and on all day with these.  20+ years I've been lifting weights and there isn't a week that goes by that I don't hear one of these.  In the gym it's even worse.  At a previous gym there was this old guy who used to watch me like a hawk.  It was quite disturbing actually.  He watched me constantly.  Like a security guard watches skate boarders at the local Target.  Anyway I was having a pretty good session one night and hit 275x5 on the seated overhead press and after I racked the weight he ran over to me and got into my face and screamed at me...

I walked off after that but he continued to stare at me.  Sometimes I would catch him out of the corner of my eye walking in my direction and I would bolt the other way.

Anyway, everyone USED to be big or USED to be strong.  I don't know if there is anything worse than a guy that used to lift weights but tries to tell you what you do or don't know.  Go take up a knitting class asshole and have a glass of shut the hell up juice if you don't have the sack to stay under the iron.

Pardon the mild rant. Anyway, every guy that lifts long enough and builds an appreciable amount of muscle will get some of these.

Yeah yeah, great most muscular "used to lift weights" fat guy. I bet you specialized on bench too.

Take your child to work day -

I finally remembered this this year and brought my two oldest.  It was a lot of fun actually and I'm grateful we were able to spend that time together.

I have been in cruising mode for a while in lifting and I am enjoying it.  I have only really learned this ability in the last few years and wish I had the attitude for it years ago.  I am generally balls to the walls intensity year round but the fact is, you really can't do that without incurring injuries or setbacks at some point.  It's better to maintain your foundation level of strength and then push the envelope a few times a year than constantly be a race car in the red with training intensity.  You won't last long like that and progress will be inconsistent.  Know when to back off.  And I don't mean for a workout, I mean for a few weeks at a time.  You aren't going to get weaker and when you do decide to push it the body will respond.  Plus I love conditioning this time of year.  The weather is great and I can get back to feeling good again.

Be smart and understand recovery over the long haul as well. Two or three months of cruising is nothing in a lifetime of lifting.

There are literally like 200 remakes in the works.  Why can't Hollwood develop new stories?  Does every writer in the world have writers block?  Crap, make a movie about that!  How every writer in the world is stricken with some sort of alien disease and has lost all of their imagination.  And for the love of God can someone stop Michael Bay from making another movie of ANY kind?  Wow this guy is full of the suck.

Peri-workout nutrition - does it really matter?

Anyone who has spent a modicum of time researching nutrition stuff has heard that you need to eat X so many minutes before training, then X so many minutes before training (that's not a repeat, it's two different times BEFORE training), then you gotta have BCAA during training, then you gotta eat X right after training then eat X another 90 minutes later blah blah blah.

Look I've done that before, I don't notice any difference.  I will say that I have figured out that a small bowl of oatmeal and a protein shake in water about 60-90 minutes before I train does help me.  I have a decent amount of energy with this.  During workout I've done everything from BCAA to gatorade, to whatever.  I keep pretty good training logs and I don't ever remember noticing that I benefited THAT greatly from one to the other.  Post workout I just make sure I have something to eat within an hour.  Mainly because well, I'm hungry.  Dudes have been getting big and lean for decades without peri workout nutrition.  Does it give you an edge?  Maybe.  How much?  5%?  10%?  No one can say.  I always hear about scientific studies regarding this but from my own anecdotal standpoint I've never seen a big difference.  If anything I always felt better by using food before and after lifting.  I still play around with this from time to time but I think it's the most overrated thing in all of training nutrition personally.

I've been playing online with a couple of guys (chicken and bonebust) for I don't know how many years now. Anyway, outside of them we have a group of guys we have been playing with for a long time. I made a joke the other night this one kid we've been playing with has bass in his voice now. So we've been playing online together so long we went through puberty with this kid. I don't know why I find that funny but I do. Another friend that bones and I play with all the time is called KillingKnight. He lives in Cali and is a pot head. Sometimes when we're playing and you can see what he's doing, then suddenly his character isn't even moving. Generally when that happens it means he's smoked so much he's just passed out. Literally, at that moment.

Xbox live is also a strange place, where everyone thinks that Bonedust and I are black guys and they call us the N word, and where kids curse like sailors. Where are the parents at?

It's also where "we'll see bro" was born and now myself, my work friends, and my family say it all the time. All credit for that is to Bonebust. The story behind that is we were playing against this kid one night that kept running his mouth about how great he was. We lost 1 match against this kid and his team and after that he would not shut up talking smack. So eventually Bones just started saying "we'll see bro" to everything he said to us. Kinda like this....

"Next match I'm gonna do it again."

"Your team is garbage."

"Why do you keep saying that?"

This went on through multiple matches and eventually everyone was laughing hysterically at this kid and he left. So lesson learned, you can be just as annoying as young smart-ass kids online if you really put your mind to it.

How often do you have to "psyche" before a set? I've been thinking more about this lately and how much stress it puts on you. If you're training 3-4 times a week and doing say 4-5 movements per session and you have to psyche for every working set, you're getting psyched up a hell of a lot of times that week. I think this is something a lot of guys overlook, but I am beginning to think it plays a bigger factor than we realize.

If you used weights that were at the top of your "casual max" each week, you leave a lot of room for ramping up over months and weeks, and I think you'd get less mentally burnt as often. I think this could be a very easy telltale key in proper programming as well. If you're into the third week of your training cycle and you're already having to get psyched to prepare for that lift, maybe rethink your programming right then and there. Just a thought. I may expound on this idea later.

Save these for just a few weeks in a training cycle.

I am tat free, however have thought more about getting one for months now. For my own personal reasons, not to "look cool". I haven't settled on it yet. The wife hates em, so that's even more reason to get a full sleeve done and come home with it. HAH! 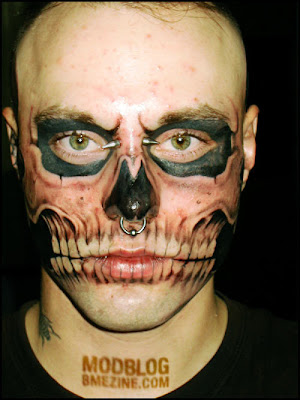 I wonder if this guy also changed his name to Skelator?

Conditioning for winter -
Winter ended here only a couple of months ago. The winters here can be bad. I don't mind the cold, but the snow and ice ruin my outside conditioning. I hate machines. I like to do a lot of sprinting and hill running. Sometimes I do this in the snow anyway but after a while it's just a pain in the ass. I have seriously been considering getting a prowler but was wondering how it would work in the snow. I live on a side street so they don't always get around to salting our roads that quickly in the winter.

Seems like an awful lot to pay to have something to push around in the winter for conditioning.
Posted by Paul Carter at 10:02 AM