This is something that is debated back and forth all the time by lifters.  A long time ago I had a "star system" where I set up lifts for 5 rep maxes and what level it was placed on.  Like "weak, average, strong, elite" that kind of thing.  It stirred up quite a bit of discussion on the small board I posted on at the time.  I thought it was good food for thought.

I go back and forth with this sort of thing all the time with Jim Wendler of elitefts and so I figured what the heck, I'd throw some numbers up that we have been chatting about that would constitute really diesel elite-level lifting for reps.

Jim says this is ridiculous.  I left it at 200x10 for that very reason.  I mean we're talking elite level right?

Some skinny guys that are naturally built for chinning might be able to hit this.  But we're talking dead-stop chins all the way up.  Not that forehead to the bar shit.  This is diesel chinning/back strength, especially for guys over 200 pounds. 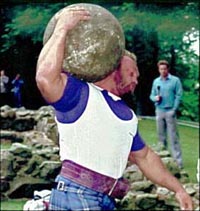 Kaz claimed to have squatted 600x25 pretty regularly. I don't doubt it.

No push press crap.  Lots of guy can do push press numbers that look good but then fall flat on their face come strict press time.  This is the one lift where we never talked about reps but just about putting 3 wheels overhead.  I was probably good for this at one time (275x3 strict) but I do my standing press from a clean.  I couldn't hang clean 315 so I never got a shot.  After August I am going to take a real run at this over the next 12 months.

Again, strict.  I don't think we discussed this one too much but it's there (I think).

I think it's safe to say if you knew someone that could hit all of these, words like "beastly" and "awesome" would come to mind.  Words like "thin" "slight" or "frail" probably would not.

7 lifts to maximize your entire genetic potential for strength and mass (along with PBnJ).

Pretty simple isn't it?
Posted by Paul Carter at 8:11 PM