Sometime back, a strapping young lad (I don't know that I've ever used that in a sentence before so Chase, feel privileged) shot me a message telling me that he had put his wife on the strong-15 short cycle.  Out of that cycle she ended up with a 90 pound squat PR (yes, 90 pounds), and several other big PR's.

Obviously her results made Chase a believer, and he sent me an awesome write up about his last competition, using LRB philosophies and programming.  Chase has also been picked up as a new contributor at Elitefts.  So keep an eye out for his stuff there as well.  Many thanks to Chase for the fantastic write in.

Pay close attention to how he programmed and what he hit at his competition.  PAY ATTENTION!

I came across this website after hearing an interview with Paul on IronRadio. As I listened to the interview I found myself nodding in agreement with a lot of everything Paul had to say. I also like his outlook on training and life in general. When I find people with similar training philosophies, ideas and thoughts as myself I always read everything I can by them. Because no two people have the exact same ideas and I know they are someone I can definitely learn even more from. I came to this website and read up on everything I could. Soon after I purchased his “Philosophy of Training Programs” e-books and it wasn’t long after that when he released “Strength-Life-Legacy”. So of course I purchased this e-book as well and read it a couple of times while I was on vacation in Mexico. This book was full of awesome information and I couldn’t wait to experiment with some of Paul’s ideas in my own training. The problem was that I was 16 weeks out from NAS Strongman Nationals when I got home from vacation and had already written my training program to prepare for strongman nationals. And this wasn’t a time to try anything new.

I didn’t commit to it just yet, as I wanted to wait until Nationals was over because that was my focus. But I went ahead and programmed out a training cycle for it just incase. After Nationals was over and I had recovered for a few days I decided to send in my entry and check and begin training for it.

Most of my deadlift work is usually done raw throughout the year. I decided to do this whole cycle suited though because deadlift suits are allowed in strongman and my previous most recent PR was done suited back in May. 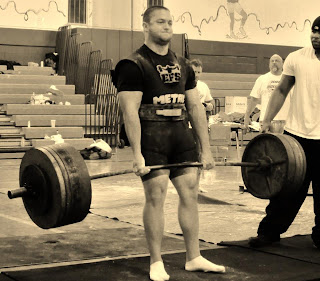 The problem was I had exactly 5 weeks before the competition so I couldn’t do the program exactly as written. And the Strong-15 cycles are written for squat, bench press and deadlift. Not for the log press. I decided I would follow the Strong-15 cycle almost as written for the deadlift, but since I had 5 training weeks I wouldn’t have a full deload before testing. I also decided to use the bench press cycle as a log press cycle.

Another thing I did different was that I deadlifted twice a week during this training cycle using speed deadlifts during the week and pulling the Strong-15 Short cycle on Saturdays after log press.

I didn’t train any other strongman events during this time as I devoted my typical strongman event day to log press and deadlifts (and glute ham raises, ab wheel rollouts). I dropped the other events because I knew pulling twice a week was going to be taxing enough on the body and my CNS. Carrying 600-700 pound Super Yokes or loading 340 pound atlas stones or any other events would’ve just been too much.

I competed at Strongman Nationals on November 2nd & 3rd. I took off training completely until that following Saturday when I began my training block for this competition. 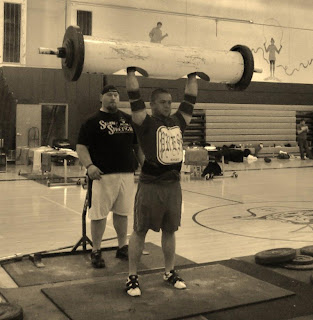 With the Strong-15 Short Cycle you program your working sets based off the numbers you want to hit on your third attempt. I was conservative in the numbers I chose because I hadn’t touched a log since June or July and hadn’t pulled much in a suit since around then that either. Preparing for Nationals I didn’t touch a log because axle and circus dumbbell were the pressing events I needed to prepare for. I did most of my deadlift work raw and then suited up for the car deadlift or an occasional heavy single. But the car deadlift is completely different than a straight bar deadlift from the floor. So in other words I needed to get my groove back on the log and on pulling from the floor in a suit. And I didn’t know where my strength was on these lifts for sure. So I programmed for a third attempt of 340 on the log clean & press and for 660 on the deadlift. Both of which would be 10 pound PRs.

Week 5: (This is the week I made some minor changes.)

*The Strong-15 Short Cycle called for me to hit 300x1, 305x1, 315x1 and then as many reps as possible with 270. Since I was one week out I dropped the 305 press and the back off set. I hit 315 very easily and decided that would be my opener for the following Saturday – as I felt I could’ve easily hit it for a double that day. I dropped the back off set also, so I had less to recover from since I didn’t have the full week off like the cycle calls for. If I would have had the time I would’ve ran the cycle as written though.

**I hit all of the weights called for on the deadlift with the exception of 595 for a triple that was called for after the 625x1. This triple is an important part of the program as Paul says if you nail this you should be good for you third attempt. I dropped this though because I didn’t have the full week off to deload before the competition. And I knew 595 for a triple would be very taxing, but I also felt that I was good for it that day and would’ve pulled it if I had more time to deload. I killed 625 that day and decided on it to be my opener as well for the following week. I felt like I could’ve pulled it for a double that day if I had wanted, so I was confident in it as an opener. Again, if I would have had the time I would’ve ran this cycle as written also.

Accessory work during this training block was:

On log press I ended up hitting 315, 335 and missed an attempt at 355 trying to break the Lightweight 231 National record. Believe it or not my opener was enough for the win out of the 5 competitors in my class. I walked away with a 5 pound PR on the log. I had more than 335 “in the tank” as I think I was good for 340-345. But I didn’t want to jump too high on my second attempt since I was planning on attempting 355 for my third to try to break the record.

Moral of the story – The Strong-15 Short Cycle works.
Posted by Paul Carter at 7:59 AM