So I've been "ranting" about the lighter percentage and reps stuff for a while.  I feel like it MIGHT be starting to sink in with some people at this point, seeing as how I outlined the Russian training programs, and the Mike Tuchscherer article pretty much drove it home.  I mean, it's hard to argue with that much evidence.

I'm going to be going into a lot of this over the next few months.  Not just going into it, but direct application, and I'll be writing about how to apply it.

The thing to know and understand is that, it's not a cookie cutter method.  I don't think a noob or an intermediate needs to follow the same theories as the advanced, or very advanced guy because their ability to do work, and the taxation of the workload itself, is far different.

So I found out yesterday that the USPF Nationals will be held in May, instead of July.  So that totally throws off my offseason plans.  I had intended to run carbnite until February 1st.  Now, I'm going to have to cut that back to January 1st I think.

I will just go to CBL at that point (Carb Backloading for those of you that haven't been paying attention).  I will start at 2 days a week and go from there.  I also won't be going crazy with the carbs as I've found I don't need to.

And speaking of Carbnite and Carb Backloading, I'm an affiliate with Kiefer now, so if you want to know how to run these protocols correctly, I recommend checking the links on the right side of the page, and buying his books.

As far as training goes.  I've got everything outlined and have kind of already been massaging it into place.

There is no leg day 2 until I hear more back from my doc about the MRI.  Either way, the fronts have been going good, so I'm going to stick with them.

365 should be out this week.  It may be a day or so later than I anticipated because my graphics designer is such a perfectionist.

The bad news, is that the Lifer Series won't be done in time for the release.  It's too "involved".  She sent me the first 7 pages and well, it looks fucking awesome.  So awesome that I think I'm going to do it in paperback only, because I think that's the only thing that would do it justice. 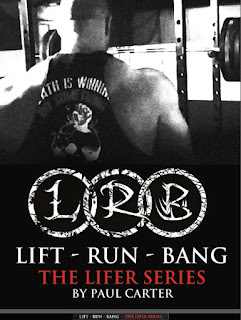 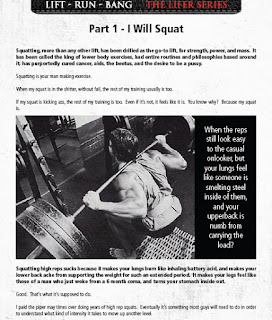 I will probably be going back through it as well, and adding some stuff and probably even a chapter here or there.  Either way, I like the look of it so much I don't think an e-book would do it justice.