So it's been a few weeks since the meet, and unlike usual, I did not take any time off after the meet.  I resumed squatting pretty much the week after the meet, and immediately I could tell what happened AFTER I squatted that 611 with the groin tear.


I shifted most of the weight to the left leg, and especially onto that knee area because I knew I could not push my knees out to expose my groin very much.  My left knee still hurts a bit, but nothing I can't tolerate and it is getting better weekly.

Unlike in years past, I took no break from training after the meet.

I went right back into training and back into looking to break some rep PR's.

In that time I've hit the following PR's....

I also did 545x3 from a 4 inch deficit after the front squats as well.  But this only ties a PR.

My weight is fluctuating between 258 and 268 pounds.  Yes, that big of a difference mainly because of carb intake.  If I REALLY pound the carbs for a couple of days I'll push right up against 268.  When I back off of them, I creep back down to 258-260 in a few days. 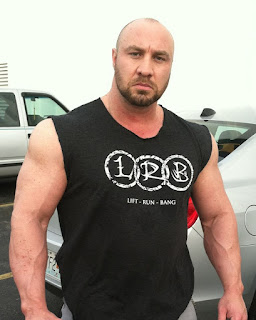 My lifts feel good, and my groin is healing very well.

Obviously there has been a lot of stink made about what I was supposed to hit at this meet, and what actually happened.  That's fine.  I will put my shit out there, and the weak minded can talk about me all they want.

However post meet, I feel more enthusiastic than ever.  I came to the conclusion that even on a bad day, my training carried me to a 1686 total.  Just picking better attempts (633-430-675) would have netted me a 1738 total with a badly torn groin, on a very bad day.  That's a top 25 raw total at 242 with no belt.  I do believe on a good day with everything lined up right (which is generally what happens when someone hits their best totals) something close to 1800, or the 1800 would have been there.

So instead of leaving the meet bummed out and discouraged, I actually left with a sense of enthusiasm.  That my training worked very well, and that the ideas I had put into place paid off.

I don't think I'll do the 242's again, but I'm not ruling it out.  I will see what happens over the next few months with my weight gain.  If my weight stays in this same 258 depleted area, I will cut to 242.  If it continues to rise I will go to the 275's.  I never thought that I'd write that because the goal has always been to just be a 242'er very lean.  However I feel fine about where my conditioning level is at, I've got this whole backloading thing down really well now, and my lifts are rising at a rapid pace.

Some thoughts about why all of this is......

All of those months and months of volume finally caught up with me.  In a good way, I mean.  I started eating more, not a lot, just more good quality good, and my bodyweight just jumped quickly.  Nothing else changed.  The base building work really cemented another layer onto the foundation, and that will get phased back into training in a few weeks/months.

Because everything has a point of diminishing returns in training.  You can only add so much volume, or, you can only break so many rep PR's before something needs to change.  This was a great conversation that Brandon Lilly and I had at dinner that evening.  That you can only ride a particular horse for so long until something has to change.

The base building work with volume and lower intensities will work tremendously to build mass and foundation strength.  But for a meet, you need to peak, and then afterwards you need to address what you need to change in order to take the next step.

Right now, for me, that means getting back to hitting some rep PR's WITH some of the base building methodologies built into it.  The reason for rep PR's is because reps build MASS.  And I need more of it to get to where I want to be from a strength standpoint.  I flat out just need to get bigger.  So either I will grow into the 275's, or become an even bigger 242.  I still really want to hit the beltless 1800 @ 242 so that may play a factor.

I've said for a while now, that after a meet, if you have enough time you need to spend it training to get bigger.  So that's basically what I am doing.  However this will not be a "bulk".  I will work for rep PR's, and let the backloading do whatever it does.  If I get fatter, I'll adjust.  If I am not gaining at a fast enough clip, I'll adjust.  But I really think I've got it down now and so I have quite a few months to keep adjusting things until I get closer to where I want to be.

My backloading process is simple, and I will go over it in a later post.  My training is still big-15 based with some base building work mixed in.

I'm still hard at work on the book, and it's basically going to really outline how to use this whole training paradigm for yourself, so that you keep moving forward both in the muscular size area to compliment bigger and bigger totals/weights.

Thanks to everyone who has been supporting me lately.  I love and appreciate you.