Staring you in the face

This past weekend, Dan Green went over to the land down under and broke his own world record in the 242 class, by going 2171 with knee wraps. 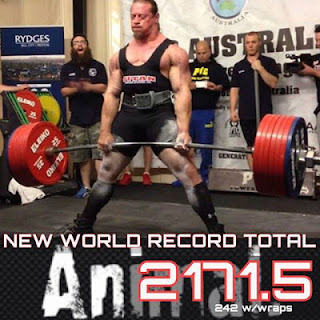 As you can see, even Animal made notation of the fact that it was with wraps.  Larry Pacifco still has the no wraps record at 242 with 2080.

I make a notation to point this out not to disparage Dan at all.  I think Dan is currently the best powerlifter walking around at the moment, and I hope he doesn't end up injured and can sustain what he's been doing the last year or so, for a very long time.

I make a notation of this because numbers in context DO matter.

Just so I don't have to type "beltless" "belted" "belt and knee wraps" etc over and over again for this article, here's how I define "raw".

Then of course, you have single ply, and multiply.

I find it odd, that powerliftingwatch.com keeps tracks of rankings and numbers and records in appropriate fashion, yet some gym owners or lifters like to throw out numbers without adding in the context or manner in which they were done.

Don't think a walk out matters?  I promise you it does.

Getting a hand off in benching matters.  If you don't think so, unrack your own shit and see if you can press as much, and get back with me on that.

A belt matters, a belt and knee wraps matter, and of course single ply and multiply matter.

If you didn't listen to my interview with Capt. Kirk, he was very aware of what his belted and beltless squat PR's were, and did whole cycles based around building that beltless squat.  His best beltless work was 655x8 (fuck my life) and 800x1 (fuck my life!!!).  With a walk out of course.

Kirk told me that after 6 weeks beltless, he'd simply throw a belt on the next week, add 20 pounds to the bar (675) and do that for 5 reps easily (so the next phase of his training would start).  Kirk said he got roughly 50 pounds out of adding the belt on squats.  Maybe more.  He squatted 800x5 with a belt only.

Throwing out numbers without the context in which those numbers were done is disingenuous.

When I was in Chicago with Brandon Lilly he told me at 19 he walked out 660 with belt and knee wraps and dunked it at 219.  He did 600 without the knee wraps.

Years later, after being in gear for an extended period of time he decided to do some raw training.  Now weighing over 300 pounds, he took 650 out and went down with it and his words (more or less) got his face pushed into his crotch.  Let's put this into context.  Brandon was squatting over 1,000 pounds in gear at the time.

Put that in your pipe and smoke it for a while.

To add a little more context to this, Brandon's best geared total around that time was 2,500.

His best medium raw total is 2,204.  Without training in gear Brandon went back and did an equipped meet and hit 2,612.


Ask him of all his totals which one he feels the most proud of.  Not only that, but we've had a discussion about him going rare and hitting a certain number there (I won't say, that's all up to Brandon).  Brandon is a smart guy.  He knows he can't go 2,200-anything sans belt and knee wraps.

When I was at the nationals Scott Smith was pretty upset because he was going to end up taking second place to Chris Pappillion, who can't bench 425 raw, but can bench right with Scott in gear.  And Scott is a 500+ bencher.  It's because Chris knows how to work his shirt, and Scott hates it.  But raw, Scott would walk all over Chris, and Chris knows this.  But they weren't raw that day, and Chris won under a level playing field.

And this is why context matters in numbers.

See, I don't have anything against any particular style of lifting.  Rare, raw, medium raw, equipped, whatever.  I don't care.  Do what makes you happy.  What I do have a particular issue with, is for someone to throw around numbers and claiming superiority without making apple to apple comparisons.  A multiply squat of 900 isn't the same animal as a belt only 900 squat, which very very few people have ever been capable of.

Yet 900 pound squats are pretty common at multiply meets now.

How many raw-anything guys can squat 900 right now?  Very few.

So just because you're strong in gear, doesn't mean you're strong out of it.  This has to be proven.  It has to be done.  No different than Brandon getting face planted by 650 even though he was squatting 1,005 in gear.

Powerlifting, I thought, was supposed to be a representation of strength.  Not just numbers.

However, and unfortunately, in powerlifting numbers are not always a representation of strength at face value.  The manner in which those numbers are obtained DO MATTER.  I've read where some people bitch that I always label my videos or lifts "no belt/no wraps" or "close grip bench".  Well, I do because it fucking matters.  A 455 bench and a 455 close grip bench well, they aren't the same thing.  I'm very aware that I don't get style points for benching close grip in meets, however I promise you I get the respect of my peers for it.  Plus well, it looks far more bad ass.  And KK does it too, so that has to count for something.

Most of this shit is really just great big dick measuring contests.  And dick measuring contests are fine.  That's what sports are really about isn't it?  I'm more "bad ass" than you are?  Sure, let's roll with it.  But if we're going to measure dicks then make sure that when we break our rulers I want to make sure you're not using centimeters for inches, and  then claim that your 18" dong is so much longer than my measly 7" one.

"We get so much deeper inside our women because we've got 18 inches and all those guys are packing a fraction of that."

Too bad she can't tell the difference.

Eventually the wool (lambskin?) gets removed and people can see this shit for what it's worth.  At least, I hope they can.  That way, respect can be given across the board to anyone who trains, competes, and puts their dick on the measuring block.  If not, and you want to talk shit and break out the ruler, then go meet those people at doing what they do and outperform them in their arena.  Don't sing it, bring it.

Strong is strong, is strong.  If you're only strong under specific conditions then how strong are you really?