If you want to reach your goals, don't sing it...bring it.

It's no secret I despise hipsters.

I hate them with a fervor that is almost shameful.  Who grows a beard, wears hand me down thrift shop clothes and then carries a fucking iPhone?

But what really bothers me about them, is their smug attitude that because they sit around and talk about "things that are important", they somehow are far more intellectual than everyone else, or that they somehow make a difference.

Here's the clue in.  They don't, and all their conversations don't make a fucking difference either.  Because talking about shit, never got shit did.  Yes, that's bad grammar on purpose.

They didn't join the Peace Corps for a year.  They didn't venture down to the soup kitchen to feed the homeless (maybe to steal their clothes or beards).  They didn't join a team that is part of cleaning up the inner city.  They talked some politics, laughed over "ales" or coffee, and pretended like it makes them a better person for "caring".  I mean seriously, who the hell talks about world peace?

This is why I hate them.  They are physically lazy blowhards who idolize themselves as the "greater good" because they think they care more than everyone else.  It's horseshit.

You know who the greater good is?  It's the little ol lady who spends her Sunday at the homeless shelter taking care of Vets or others that are legit down on their luck.

It's the guy who took a year off from school to go build orphanages in third world countries.

It's the guy who gets out of his truck to help that little old lady cross the street in traffic.

Ok let's be honest, I'm not being fair to hipsters.  They aren't the only ones who simply ghost walk through life, talking about all the things that really matter yet never lift a finger to change their life or environment they live in.  The prick driving the Prius isn't helping the environment, he's just being lazy.  If he wanted to make a change in his current environment he'd get out and pick up trash off the side of the highway.

Most people, MOST, never do the things they talk about "wanting" to do, or the things they would love to do, out of fear of leaving their comfort zone.  This is an old and tired cliche, so I won't expound any more on that.  That's an entirely different article.

Rather, I'd prefer to ask a question.

When did "what you do", stop mattering?

When I was into following bodybuilding, I knew lots of guys that trained in the gym, and ate 6 times a day, and did all the things bodybuilders did, except compete.  Yet they still choose to call themselves bodybuilders.

Here's the thing.  Until you diet for X number of weeks, do the spray tan, fill out your entry form, and step onstage with salad dressing slathered all over yourself, you're NOT a bodybuilder.  You're no more a bodybuilder than the guy that puts together the shitty entertainment center from Target is a carpenter.  Taking some cell phone pics in the gym bathroom after you've got a good pump, then posting on Facebook about how you were "killin it at the gym" doesn't make you a bodybuilder either.

Until you get on the platform and squat, bench, and pull a total, you're not a powerlifter.

You see, these things are earned.  And they aren't earned without actions.  In other words, someone had to DO something, rather than talk about something, to BE something or become something.

What you DO defines who, and what you are.  If you murder people on the third Sunday of every month at midnight because your bag of demon possessed skittles told you to, you're a fucking serial killer.  You could also be the janitor at the local community college while you're doing this as well.  So guess what?  You're both.

What we say defines what we think or believe, but our actions defines who we are, or what we define is most important.

"If you want something bad enough, you'll peel your flesh off in order to obtain it. It doesn't matter what it is. Whether it's a job or a relationship or whatever it is, if you truly care about it to the very depth of your soul, you will sacrifice whatever you must sacrifice in order to see it come to fruition."

If you love someone, it can't be enough to think it, and say it.  Your love for them should be tangible in your actions.

If you have committed to something, it's not enough to talk about it, or say it.  In fact, I watched a video earlier this week where the speaker talked about studies that showed, if you spoke about your goals, you would be less likely to actually achieve them.  You see, you get a similar feeling in the brain from speaking about achieving goals, as you get when you actually do them.  So the level of commitment wanes.

Maybe it's time to stop speaking of all the things you want to do, or the goals you want to achieve, and actually store them away in your mental vault, and let your actions do the talking.  I feel like in the past I've talked way too much about goals I've wanted to achieve and then inevitably, not always been able to get the job done.  There's no one to blame for that but myself.

However, I wonder if it ever occurred to us while we lament over not reaching goals we held so dearly, that we may have short circuited our own efforts simply by speaking about our passion for them.

Stop talking about the shit you're going to do, and DO shit.

I often laugh about one of my old fight coach's favorite sayings after we would whip someones ass.

All the shit talking in the world didn't stop a punch or throw a combination.  Eventually, actions did all the talking.

If you want your life to matter, and you want the things you are passionate about in your life to come to fruition, then guess what?  Death is winning....don't SAY something.  DO something.  What did you think my motto meant, anyway? 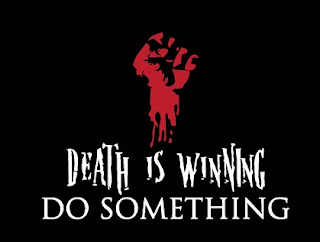