Thoughts about life, crap, training, and stuff - Do work, don't bitch, fear not.

Living in the entitlement generation drives me crazy sometimes.  It's not only kids that have a problem with instant gratification now either.  Reality TV, instant access to any and all information has drilled the habit into people that the things they want, can be given to them instantly.  Mainly at this point, information.  But isn't information everything anyway?  Information is knowledge.  Knowledge is power, and with knowledge and power you can accomplish just about anything you want to.  Within reason of course.  If you're not mean to play in the NFL and don't have the physical capability, no amount of knowledge and power is going to turn you into Lawrence Taylor.

So with so much information freely available, why isn't everyone leading the life they so desperately dream of?

The problem arises, when someone wants something and it's not so easily attainable.  It can't be clicked on in order to get it.

In other words, it requires work.

Let's take money for example.  Most people want money, and lots of it, or at least enough to be comfortable in their life.

So since doctors, especially surgeons, make metric assloads of money, why isn't everyone trying to become one?

Simple.  Because that shit is hard.

Because it's easier to buy a lotto ticket.  That shit is easy.

Most people don't have the things they want in life or in the gym, mainly because their "want" of something isn't strong enough to overcome their own intellectual or physical laziness.  This doesn't mean that people who don't want to be doctors are intellectually lazy, but it does mean that people who complain that they don't have what it is they want, aren't applying themselves intelligently enough in the pursuit of it.

Remember the rule about what is important in your life?  It's easily defined.

I harp on these two constantly because it literally tells you everything you need to know about what is currently most important to you.  Sometimes, we aren't always even aware of what's most important to us because while we may think on such things all day, our actual application to making something happen is negligible.

If you can't describe your actions for #2 on the list above as "significant", then it's very possible that something isn't much of a priority.  People will ALWAYS work at something that consider incredibly important.  Always.  Even the laziest of people will work hard on something that's high on the priority list.  Many times, that means finding ways to continue to be lazy and not work hard.  But I guess that's something too.

However working smart is just as important.  In fact, often times, very hard workers can undo themselves because of overreaching, or overextending themselves.  I know a lot of guys that have no problem working hard and heavy, but haven't made any real progress in a long time because they have no idea when to back off, or understand that recovery is part of the training process too.

When I say "do work" it doesn't just mean to go balls out, hair on fire style work.  It means do work that matters.  Smart, thought out, and effective.  This applies for every facet of your life and training.  Smart and effective work will always win the day.  Hard work is a part of that equation.  It's just not the answer every single time.

However, if you expect it to fall on your lap or be a click away, then be prepared to be disappointed.


Don't bitch...unless you have a solution -

I have no problem with people griping and complaining.....so long as they have a solution to their bitches, moans, and complaints.

Complaining is a lot like yawning.  It's infectious.  I've been in a lot of meetings where someone starts complaining, and then the majority of the room becomes infected with a negative energy and reaction to everything.

People will complain for hours, and offer no solution to the problems which haunt their daily life.  It's amusing to me.

I was recently in a meeting where my co-workers talked about how much they hated filling out paperwork, when we had a whole group dedicated to doing part of those tasks.  The complaints went on for more than 15 minutes before I finally chimed in and offered a solution.  The room went silent for a while and my boss goes "wow, that would work really well."  That solution is now in place, and there are no more complaints about this mundane task.  Had I allowed the infection to spread into my own brain, I would have become a bitch zombie just like everyone else.  I refused to do so because it's been a long standing rule of mine, to not have a bitch, moan, or complain without a solution to go with it. 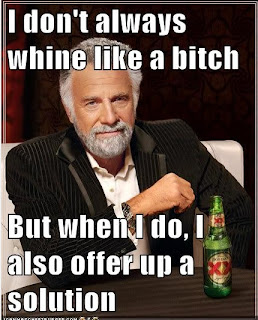 Many people don't want to think of solutions because they want to be pitiful and simply have someone feel sorry for their woes.  I'm not sure what pity ever earned anyone, but whatever it was it didn't earn them what they needed most.  A lesson in overcoming problems, and searching for solutions.  Life is going to be a constant barrage of these battles, so it behooves you to not bitch, moan, and complain without a possible solution.  If your solution does not work, or isn't applicable, it is totally not against the law to apply a different one.

Many times in training, you're going to run against that awful wall known as plateaus, and complaining about not "making gains" is going to jack and shit in terms of getting you past said wall.....and Jack left town.  So you can wish in one hand and shit in the other and see which one fills up fastest.  Without finding a solution, you're just going to be left with a shitty hand.


Fear not...unless it betters you -

There are a million quotes about overcoming fear, and dealing with fear, and the fact that fear is generally the thing that keeps you from taking a step into the unknown to conquer new ground and grow.

However the most poignant thing I've ever heard about fear was that "the majority of the things we fear, or worry about, never come to fruition."

I have found this to be so very true.  Even worse, is that we waste so much of our lives with our emotions entrenched in fear and worry.  So much time wasted doing something that only causes us stress, steals years off of our mortality timeline, and offers nothing in return.  It's a life sucking investment.  Literally.

Fear can be a great motivator.  Both in good and bad ways.

Fear of losing a brother in arms will drive a soldier to risk his life to save others.

Fear of ridicule, scorn, and failure will keep someone from taking on a great challenge.

It's the controlling of fear that is more important than being afraid.  What you do with that fear matters more, than the fact that it is there.  Most people worry because they feel it natural to do so.  However instead of letting that fear move them into a rewarding and positive direction, they generally let it suppress their life and hold them back.  This creates a larger debt of self doubt, insecurity, and lack of belief in ones ability to overcome things that don't come easy.

Well as far as I knew, there weren't any places to get car insurance at 3 a.m. so I lost sleep over such a ridiculous worry for no reason.  What should I have done instead?  Made a mental note to myself, or verbal one to her of "hey we need to go get some car insurance tomorrow."

This isn't a lot different than having a bitch about something in that, generally you can quell some of your fears by creating solutions for them.  If you can't create a solution for them, I have a flowchart you should use..........

I had someone look at this flowchart, and tell me "that's a cop out not to be accountable."  I do not agree at all.  The flowchart clearly asks you if you can do anything about it?  If so, don't worry.

Do all of these things not sound better than worrying about some bullshit in your life you have no control over at the moment?  Yes, they do.  In fact, I believe that if you were to think of the following scenario when you go to worry, your life will be better.....

Have sex with two hot women (it doesn't matter if you are a man or a woman, sex with two hot women is always good)
go to the fridge, eat Snickers ice cream bar....pass out
wake up to breakfast and down some Fruity Pebbles or awesome cereal of your choice
Get in your Viper, head down to the beach
Walk over to bar located at the beach.  Buy tasty beverage loaded with alcohol.
Check out ripped and tanned self in mirror located in said bar.
Walk on the beach, giving zero fucks about problems and enjoying life

This scenario sounds much better to me than worrying about bills I can't pay with money I don't have.  A bill isn't going to pay itself so I guess my solution would be to let them know "hey, I have no funds.  I'll pay it when I can."

I'm not telling you not to worry.  You're going to.  I'm telling you, try to do the best job you can of managing that negative energy, into something that creates a positive outcome for you.  This may take some serious introspection on your part, in terms of finding a new way to divert that energy, but it's well worth it.

Remember that most "absolutes" are generally worthless without a caveat that puts them into perspective.  You need to do work, but it needs to be productive and effective work.  You need to not bitch about your problems, unless you're doing so in order to present solutions to them.  You shouldn't fear, but if you do, use your fear to better yourself and to drive you to become a better lifter, friend, spouse, parent, or loved one.
Posted by Paul Carter at 10:35 AM