A little on sumo pulling, and pulling in general

I don't pull sumo, because I hate it.  And I think that conventional deadlifting carries a bit more "clout" with it.
With that said, my buddy Marshall Johnson sent me a video of him pulling 585 for a triple.

If you watch from Marshall's first to second rep, the speed of the two reps is VERY drastic.  Now, I know that often times this is the case in pulling.  Because there's more of a stretch reflex in the second rep, especially because some guys do "touch n go" reps.  However Marshall resets pretty well on these reps, so there's less of that.

From the first rep to second rep, Marshall pulls from slow, to very very fast.

Here is a comparative look between the two reps. 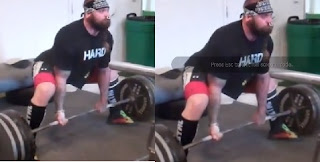 In the first rep, Marshall is sitting back deep, hips flattened out, with his chest out.  This position puts his shoulders over the top of the bar, or even slightly behind it.

In the second rep, Marshall sits back less, has more of a neural spine, isn't pushed out as far in the knees, and his shoulders are slightly in front of the bar.

The hip to elbow position is generally the best place to look when addressing the pull.  Almost everyone starts with their hips too low (for conventional pullers this often makes them "crowd the bar" and the knees are over it at the start), and shoulders too far back.

If you're pulling sumo and your hips are too deep, then the bar isn't going to start moving off the floor with power until they are a bit higher, and some leverage can be applied.

Now, this isn't always the case.  Some guys and gals that are really built to pull sumo, can get low in the hips and rotate their knees out so deep that the hips do stay "active" from the start. 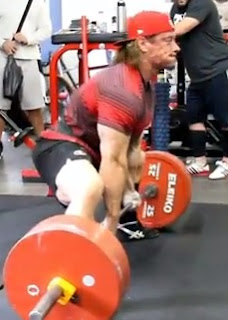 Dan still has a neutral spine, however notice that in spite of his low hips, his shoulders are still over the bar.

Dan can also get his knees pointed so far out that his hips are trying to lockout essentially as soon as the bar comes off the floor.  This is why Dan is fast off the floor, and is an awesome puller.  This is something you can't train for.  Mom and Pop are the key here.  Unless you have leverages like Dan, you're not going to get this to work for you.

Regardless of your pulling style, your hip position is going to dictate how strong you're going to pull off the floor simply because of leverage.

If the hips need to come up enough to put the shoulders over the bar, then the bar won't start rising with speed until that happens.  Marshall needed to set his hips up higher, in order to get into that position.  Dan can get into that position with his hips low.  Both are requirements in order to get leverage over the bar, and to pull with more power.
Posted by Paul Carter at 6:41 PM