After what I felt was a very rewarding day 1, I figured I would kick off day 2 with a simple Q&A and then go into teaching bench, overhead, and some various "go to" assistance movements that I believe can help people the most.

In a way I still wanted to revisit the deadlift because there were still a lot of people that I knew had a lot more "pull" in them, simply because of technique issues.  For example....... 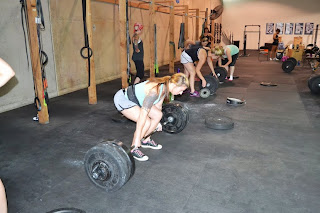 This is what I am talking about when I speak of "crowding the bar".  Notice how her knees are OVER the bar?  Her knees have to clear the bar before she's going to get leverage over it.  This also means her hips aren't quite high enough as well.  I helped a lot of people hit PR's on day 1 simply by letting them know it was ok for their hips to be higher at the start of the movement.  They were amazed at how much stronger of a position this was.  I'm not sure why so many people think you need the hips to be to low, but for most people it's counter productive.  Now, some people do drop the hips to get the stretch reflex involved, but that was not the case here.  So simply getting the hips higher, was key for most everyone. 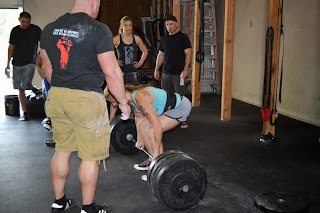 Knees now not over the bar, hips higher.

This literally was the difference between her not even being able to break her weight off the floor at all (in the first pic) and it coming about 6 inches off the floor.  Think about that the next time your deadlift feels like shit and you don't quite have your starting position figured out.

So the Q&A was mainly comprised of questions about......

After the Q&A we went over bench.  And I knew this would be a good time.  The majority of people that bench press, do not know how to set up properly, and simply get tight on the bench, nor do they understand proper bar path, or the importance of wrist to elbow angle.  So I wanted to go over these basic principles.

The fun part is always getting people to set up tight enough on the bench.  They never knew how miserable benching could be because most people simply lie down, and "scrunch up" on the bench, and then press.  However put people in a position where they must push their shoulders against my hands, and drive their upperbody UP the bench in order to get tight enough.  They always appear to disapprove of this.  So I know it's correct when that happens. 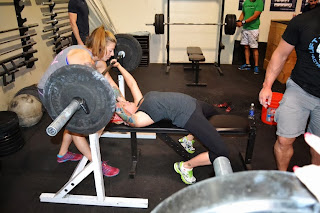 Before we even started benching I asked the group if any of them had ever gotten a lat cramp while benching.  They all looked at me like I had licked poison dart frogs before we got started.

This was excellent as well.  Because any time I teach people how to bench and they say that's never happened....it usually happens.  And sure enough two people experienced their first lat cramp from benching.  The reason this happens is because the person benching flattens out on the bench.  Meaning, their upperback loses the foundation, or tightness, on the bench.  The lats, which are already contracted, then involuntarily contract harder to try and maintain or "regrab" that position.

After benching, I decided that I wanted to have a bit of a contest and pit the women against the men in the 100 rep curl challenge.  I let the women decide between a 15 and 33 pound bar, and dudes had to use a "guy bar".  The standard 45 pound bar.

Not surprising to me, many of the women beat the men.  Some people were surprised by this however I knew that lots of the women would beat the guys because women tend to have better endurance fibers, and can often do rep work like this very well. 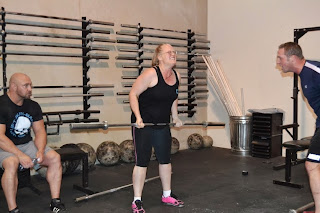 I'm not sure of the final win/loss count but I do believe that more women won than guys.  Also, if you're going to let a chic use the 15 pound bar while you use the 45, don't ever stop curling.  She'll beat you.  I was lucky I am good at these, otherwise Melissa beats me.  I never stopped and she caught up with me at the end.  I beat her by the slimmest of margins.

After the curl challenge, we went over overhead pressing, and the correction of some simple things like posture, body position, hand placement, etc.  Again, most people are surprised at the difference an inch makes.  I suppose that's life isn't it?  Both dudes and chics fretting over an inch.

To finish up I went over split squats, which I believe is very underrated and should be used by most everyone.  They help with imbalance between legs, mobility, and building the glute medius very well.  The owner of the place, Ian, was not happy about them (in a good way) and gave testimony as to just how damn good they work. 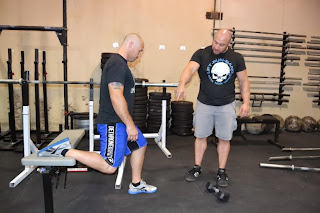 After fielding another round of general questions, I closed with some statements about just believing in yourself, and holding firm to the notion that you should believe yourself to be worthy of greatness in your life.  To always remember that we also deserve nothing.  That the only thing we deserve is what we can take, and hold on to.  To never fall into the entitlement trap.  We don't "deserve" anything.  All must be earned, and kept.

In closing I want to give special thanks to Heather Grace, Melissa Shea, and Ian Starr for making this seminar stress free, and immensely enjoyable.

I thank everyone who attended for giving me an audience to speak to, and for the love everyone showed me.  It's beyond measurable.

I urge anyone in the Littleton/Denver area to go check out Ian's place.  Whether you do MMA, Crossfit, powerlift, strongman, whatever, he has an awesome pad.  You can contact him through their website.... 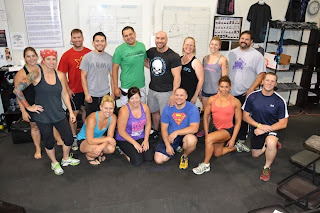 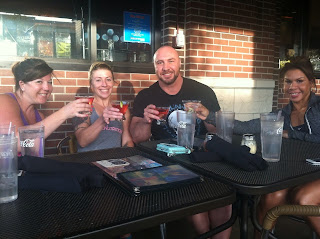