So I'm home from being in Dungver....errrr, Denver.

I actually loved it there.  The weather was awesome, the mountains were awesome, the people were....let's say I left wanting in that area.

I guess the feeling I came away with is that everyone is awfully busy with their own shit, and find it hard to make time for anything else, unless it's particularly self serving.  Not everyone, but a good deal of the people I came in contact with.

I had this same feeling about people when I was in Orange County.  Maybe it's the weather, or the beach/mountains, etc.  There just seemed to be an overall sense of self absorption that I picked up on.  Now this wasn't from everyone of course, I did meet and hang with some awesome peeps.  But I generally got the feeling that whatever the opposite of Southern hospitality is, they have a great deal of it in both places (SoCal and Denver).

I did do some training in my hotel room.  Namely, about 200-300 bodyweight squats every other day because I'm sick of not squatting, and fellow podcaster Jay Nera told me that when he couldn't squat he did tons of bw squats, and it at least kept his leg size up.  It's not fun at all, but I'm just sick of only performing a squat when I need to take a shit.

So I did a lot of those.  And the first day or so I was sore as fuck.  But my legs blew back up literally after a day or so.  There really is no replacement for squatting.

To add to that, my knee feels tons better.  Not "go squat 500x10" better, but I'm going to keep at it for a while and see if it continues to improve.

Friday my good friend, and powerlifting bad ass, Heena Patel picked me up.  We hadn't seen each other in six years, and Heena is a fucking riot.  I mean, she's got no filter and has no problem doing her best to embarrass you in every way in public.  It's fairly awesome.  Not to mention that she's deadlifted 402 at 132, with an 881 total at that weight as well, and holds all kinds of records up and down the weight classes.

We went and ate at a "Twin Peaks" in Thornton.  Apparently this is an upscale version of Hooters, however much like Hooters, I was not impressed with the women working there, especially after they opened their mouth and attempted to let the English language escape from it.

I used caveat in a sentence and this girl had no idea what that meant.  I proceeded to tell her, and give her examples of how to use it.  I told her to give it a shot, and she failed worse than Mylie Cyrus failed to put on a demonstration of glute development the other night.

Apparently waitresses do not like it when you make them feel stupid (which really was NOT my intention), and she refused to even look in my general direction after that.  Thankfully, she was not my actual waitress.  Heena did tell my waitress to slap me, if I gave her any trouble.  And for some reason, she said she felt very inclined to do so.  Let me add, I don't think she used the phrase "inclined to do so."  It was probably more like.  "Yeah."

Again, she did not use any of those words.  I am taking great liberties with how she spoke to me.

She didn't really ask for the second slap, she just proceeded to get into position and smack me.  Harder than the first time, however still nothing that was going to either....

After dinner, Heena and I retreated to her place (which she did a ton of work on and was completely mind blowing awesome) and we polished off a 5th of flavored vodka.  We spent the next several hours catching up on 6 years gone by and afterwards I crashed out hard.

The next day we had plans to go to Mount Evans.  Mount Evans is the highest peak in a massif known historically as the Chicago Peaks.  Roughly 14K feet up.  However first, we trained.

Feeling slightly hungover was not the way I wanted to start off a day that involved both training and going up a mountain.  Still, I trained.  It went like so.....

Afterwards, we cleaned up a bit, ate, and headed out.

On the way up the mountain, I started to feel the effects of the "real" altitude kicking in.  Suddenly, I had a fat man sitting on my chest (not that I really know what that feels like), my lungs burned, and I became slightly dizzy.  Heena pulled over and let me get out of the car for a bit.  And she snapped this pic....... 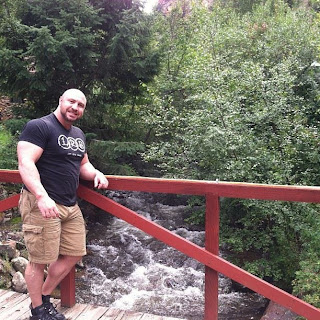 After a few minutes the altitude effects subsided and we continued up the mountain.  14 miles and enough anxiety to kill a herd of Buffalo later, we arrived.

You know you're up there when the clouds are either in front of you, or below you....... 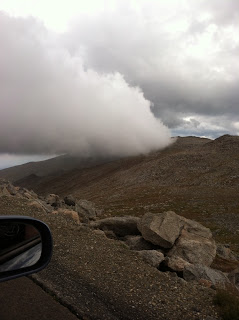 At the top, my whole body shook.  My hands and legs.  It wasn't a "I'm scared" thing.  It was uncontrollable.  My lungs felt as if I were on a boat with Jennifer Lopez in a shitty B movie and the Anaconda's from it were wrapped around my chest.  With no J-Lo booty anywhere in sight to distract me, however.

I got a stranger to snap this pic of Heena and myself.  Yes, she's dark.  And she makes jokes about it.  I told you, she's awesome like that. 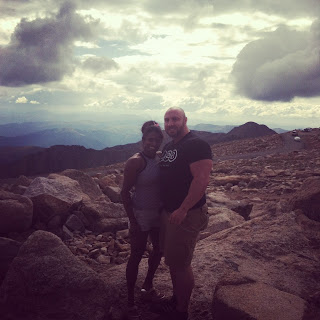 I hung out as long as I could, but eventually I just couldn't deal with the dizziness and shaking and we took off.  The weird thing is, 3 minutes down the mountain and it all stopped.  It doesn't take long going down the mountain to find "normalcy" again.

I left Denver the next day, and got severely molested in the airport by a security woman who felt as if the x-ray machine somehow didn't catch me hiding something in my crotch or ass.  Twice.

Overall, I am thankful for the trip.  I love teaching and helping others, and it's one of the few things in my life that gives back more than I give it.  Regardless of other circumstances during the week, I learned a lot (both good and bad), and grew from it.  Life gives you opportunities and it's up to you to make the best of them, even when you feel like it's not as good as it's supposed to be.  As the lyrics go, it coulda been worse but it should have been better.  I don't know if I would apply that here because I enjoyed so many facets about this trip.  But it didn't end up being what I had envisioned it being.  I think most things we do are like that.  We always become very idealistic about our adventures and relationships and things that have yet to come to pass, and when they do, and don't measure up to those ideas we always feel disappointed.

Should we?  I don't know.  Later I always feel like most of the time we play just as big a part in making something awesome or making it a disappointment.   Mostly in part because of the decisions we make in regards to the hand we are dealt.  When we get a shitty hand, or what we perceive as a shitty hand, we don't always react in a manner that sets us up to move towards happiness.  We often create new road blocks because of either our own sulking or let disappointment manifest itself in the decisions we make in regards to our circumstances.

I try to do a decent job of owning my own shit when I feel I need to.  Maybe I don't as much as I should, or maybe I shouldn't expect more out of people.  I haven't figured out which one is right yet.  When I do, I suppose I'll write on here about it.