A while back I had sent you an e-mail; it was in response to performance and aging and letting go. In that e-mail I mentioned a showdown between my son and I on the turf for 100 yards for bragging rights..Just thought you might get a kick out of this:

The race went down on Sunday afternoon. And we confirmed science…. This old goat is no match for an athlete in his prime!. My wife came along to be the starter and timer..she got the first part right but not the second..see with a stopwatch you actually have to push a button to make it start and stop...hahaha

I warm up, my boy sits on the turf and watches..I run a couple of 100's to get ready, he jogs 30 yards and sits down...we get up to starting line, I peer over at him and mumble "I'm going to kick your ass"...In return I get a chuckle followed by " Oh no you're not"

My wife calls ready set go and at go...I went or at least my brain said I went..but for some reason I was already looking at the back of young Paul's shirt...the race was really over in the first 20 yards..he had a better reaction and put way more power to the turf to accelerate. By 30 yards he had me by 7-8 yards by 50 it was 10 and it finished with me 12 yards behind...It was awesome!

It was a fun 12 seconds..It was an athlete and an old goat, It was a father and a son sharing 12 seconds and building a stronger bond. So the torch has been passed to a worthy carrier. This never would have never been a thought to do if it weren’t for the damn conditioning phase in LR365! It got me back onto a track after 30 plus years of avoiding it and I have continued running sprints once a week ( although not officially part of the program at this point)..so thank you for that.. I am much slower than I was once upon a time, but thankful that I can still do it and LRB 365 helped me realize this experience. I knew going in what the outcome be, that was never in doubt. But If you don’t think 12 seconds can be an impactful time between a father and a son…think again.

I attached a pic that was taken 30 seconds after the race... notice my shirt?! And of course the strain on my face as I try and smile and get oxygen!. 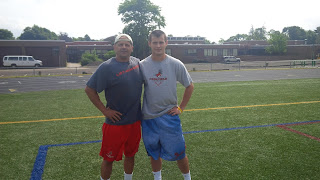