Great testimonial on how not to do shit, and then correct it....

Good Morning. I wanted to send over some quick praise your way.

I competed in the WNPF Lifetime Drug Free Nationals this past weekend in the 198lb Open Raw division. (Belt Only).  This was my second competition ever.  A little back story to go with my revelations.

The first comp I did was WNPF NJ States in June. I ran the strong 15 going into it.  I made some crucial errors on my part in programming for this meet. First I set my training numbers to high. I went with my actual max with a belt as my third attempt and worked my way back.

I then proceeded to go about training without a belt.  During my training this really started to take its toll in the squat. I was making decent progress but eventually started pushing and grinding weights.  About 2 weeks out from the meet I missed a 470 belted squat in the gym. I got all ramped up and took it again, cut it high and grinded it up. I felt beat up for the next 2 weeks. Burnt out and was already looking forward to the weeks after the meet.  Bad news.

So come meet day I set my opening squat for 425. Walked up took it and got it. Not without a little bit more effort that I expected. So I went up to 455.  I got buried at the bottom twice.

Fast forward to this training cycle, some serious rereading of your material and some realization on my part of the mistakes made.

I programmed the strong 15 short cycle leading in. I set all of my numbers lower.  From what I read it was set for my final attempt.   I set all of those numbers at 5lb over what my previous meet finish numbers were and went about training.  I really focused on the approach to each lift and the speed at which to move those weights.

For example my finishing weights for the training cycle. 405 for squat, 255 for bench, 455 for the pull. Meet week. I felt awesome all week, really energetic this time, no burn out.  Meet day woke up before the alarm and was ready to get to moving some iron.  Warm ups in the squat felt really fast and solid.

I finished last warm up as 365 and walked out to open with 415.  Took it, popped up and the bar jumped off my back.  Quick! Second attempt 430-(5 lb pr) Took it down and back up again really fast, little bit harder though. (So I deviated from plan on strong 15 and pushed my PR set to my 2nd in lieu of my 3rd…have to think that out some more)Final attempt went with 445. Unracked it dropped down came up fast started to stall but pushed it up, got it 3 whites.  20lb pr in squat and 40 lb over anything I touched in training.

Bench- my warm ups again felt great.  Took 225 a couple times in lieu of moving up in weight closer to my opener.  Took my opener of 250.  Down and up real smooth no slowing down.  NO LIFT, I got hit for my butt coming off the bench.  This fed is real tight on judging and I really appreciate it.  Sooo contrary to your recent FB post about training the way you compete I switched form.  I went from flat foot to a tuck with my feet to ensure my butt wouldn't come off. (I previously benched tucked last year and switched to flat for comps) I took 255 for second attempt down up real fast 2 white 1 red. My foot rested on the middle support bar. Final attempt-275-what I missed previous meet. Set my feet away from the bench, came down-pause-press, I swear it was faster than the previous 2.  3 whites and a PR.

Deads- warm ups felt good again.  Fast.  Opener was set for 445.  Leading into my opener I was starting to crash but just went about trying to suck it up and get my head right.  Walked out pulled 445 smooth and fast.

In all I hit 445 squat but only trained with 405 max, hit 275 bench and had more left and only trained up to 255, took 470 and trained to 455 (need to rethink this one). In all the lighter weights moving faster gave me plenty of “pop” in the squat and bench where I didn't have it before. I came in confident and full of energy this time. NO second guessing my attempts.

Of Note: a couple months ago you reposted an article by Sam Byrd about CAT training and Squats in particular, I implemented these as my back off sets in lieu of the 1 all out set at the end of each “over warm up” for my squats and my bench. I really liked it as it really did emphasize the speed of the reps and making them move as fast as possible. I feel that they paid off greatly. Squats worked with 275 and Bench 185. Far off what I put up in competition.

Now I am taking half of this week off and jumping into another short cycle to train for WNPF Worlds in the beginning of November. I will make some other adjustments to my deadlift numbers in particular and train with speed to increase my numbers again. I look forward to this training cycle and coming out of the meet with some more PR’s.

Like many people have said…this shit works, nothing new to you but more praise your way. 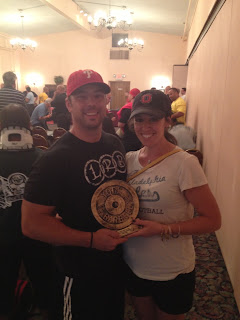