I have slacked on movies more in the last few months than at any other time in my life outside of when I was a human baby and had no say involved in it.

Ok that's not completely true, as I did watch Skyfall this weekend, and thought it fell completely flat.  I don't know if there is anything worse in a movie where I can't hate the antagonist.  In this case, I felt awful for him, and totally understood why he wanted to kill the shit out of the people he formerly worked for.

In a likewise situation, I felt the same way about the latest Star Trek flick that I watched as well.  Khan was a killing machine, born and bred to be the most mighty of warriors.  Intelligent, cunning, and single minded in his goals.  Which of course, is why he was such a bad son of a bitch.  He wasn't fucking around trying to accomplish 42 things at one time.  He had a single plan and focused on it.  So he was able to pour all of his energy reserves into that.

Of course, he doesn't prevail because well, that would make too much sense.  And a bunch of people who were not as intelligent and far less skilled in combat somehow overcame him.  Blah.  Whatever.

My diet dude posted this article up on his Facebook this weekend.

Consuming increased protein (∼35%) more frequently (6×) throughout the day decreases BF and ABF, increases LBM and TEM, and favorably affects adipokines more than current recommendations for macronutrients consumed over three meals/day in overweight individuals during both BAL and NEG.
Eating more protein, more often, decreased bodyfat and increased lean bodymass better than eating it three times a day.  In other words, the anecdotal evidence that bodybuilders have know for years is now backed by a study.

Personally, it's never made sense to me that eating all your food in one or two sittings would have the same effect on your body, or body composition, as doing it across 5-6 meals.  People forget that there is more involved in a diet than calories in and calories out.  That while managing those two components, for the most part, will aid in "weight loss" and "weight gain", those of us who are trying to build more muscle mass, or shed bodyfat, and train in a high intensity manner, need to eat in accordance with those energy needs as well.

I've been writing for some time, that we've had this whole eating and diet thing figured out for a long time, yet diet gurus get far more attention than anyone else in the fitness industry.  This shit is less difficult than training (not downplaying my diet guys abilities at all here) in my opinion, yet people make it a million times harder than it has to be.

I base my carbs around training.  The rest of the time, it's all fat and protein.  That's it.  In the last two months I've come down from a morning weight of around 265-267 to 254.  I had indeed let myself get a little too sloppy for my own good, and I feel better now, and actually have some veins again.


I've got the same goal as I've had for the last several years now.  To become a huge 242'er.  That means being even leaner than this at 252-255 pounds.  I'm slowly inching my way there.  Again, this is just another example of being patient about the journey.  It doesn't happen overnight.  It may still take me two more years to get to where I want to be.  At this stage in my training life, things do not come fast, and you must work very hard for even the smallest of improvements.  That's fine.  That's what it's all about.

This time I'd like to be 252ish when I start the water cut, that way I can still eat normally up to that point, and only cut out carbs during the water cut instead of having to start that almost two weeks out.  This will make for an easier cut (obviously) and an easier recomp.

Thanks for Ryan Celli for setting me straight on that.

My training looks pretty much the same as it did for Nationals.  A few things different here and there.

Monday - Bench/Press
Bench or Incline
Support Work (generally this time it has been side laterals, pec deck, curls, and pushdowns)

Wednesday - Squats and Deadlifts
For deads, I am starting off a 4" deficit, then I will move on to the plate deficit, and stay there.

Saturday - Back
Generally just lots of back work, with this day mainly based around the barbell row.

It's getting close.  Real close.  I expect it to be ready by either late October or mid November.

One of the things I am trying NOT to do with it, is offer TOO MUCH information.  I have found many times that writing too much info causes brain overload, and people don't absorb as much.  Where if you just give the most important bullet points, they seem to latch on to the ideas better.

Dumbest and funniest thing I've already seen this morning....(thank you for posting this Clint Darden) 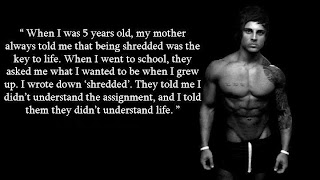 That pretty much made my morning, and will probably make my day.
Posted by Paul Carter at 9:14 AM