"Be kind, for everyone you meet is fighting a hard battle."

I've posted this saying for a long time. However never was it more evident to me than this weekend.  Not that the weekend was filled with people who were downtrodden about where they are in life.  In fact, it was quite the opposite.  It was one of the best weekends I've had in quite some time.  It was filled with meeting people I've "known" online for quite some time, speaking to a room full of college kids about lifting and life, and becoming even more aware of "living in the moment."

In case you missed it, I wrote a quick blog post last week about my friendship with Rob Kreider and how it's spanned the last 15 years, though all from online.  We were able to close the circle of friendship this weekend by finally meeting.

Not only that, but Brittney Russell arranged it so that I could speak with her bodybuilding club at Pitt University in front of around 60 college students.  This was a privilege and honor for me on so many levels.

I also got to meet my friends Jay Ashman, Cory Swede Burns, and introduced myself to Ryan Celli, who was an incredible 198 pound powerlifter who is now doing bodybuilding, and was also competing in the North Americans. 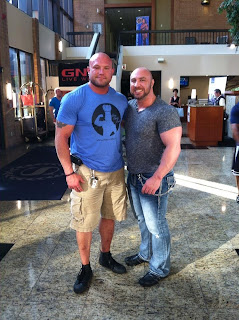 I haven't yet figured out what the "highlight" of the weekend was for me, because there were so many.  However I consider this to be a great thing because it's not often that we are so overwhelmed with positive and memorable moments that we can't settle on which one we loved the most.

If I had to flat out pick one, I personally would say that speaking to the group at Pitt was my single favorite moment.  And there are many reasons for that.

For one, I'm fucking old.  Well, compared to the audience I was speaking to.  Mostly very early 20's.  So to be honest, I wasn't sure how I would connect with them initially.  That's the key in always speaking to an audience.  You have to find a way to resonate with them.  The energy they are giving you, and then reciprocate back to them that "I'm no different than you are.  I've been through all the things you worry about, and still deal with some of them daily." 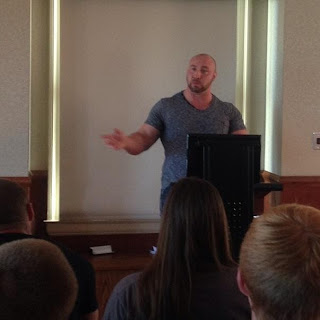 So then I remembered "Oh yeah, you were indeed in your early 20's once too, and the fact is, all of the principles about life and the philosophies you developed came from your failures and successes of those years."

And then I relaxed.

I spoke with....and I write "spoke with" because I don't like to think of myself as "talking to" someone.  I prefer to think about speaking with someone, rather than preaching to them.  I still find myself in awe of the fact that people want to hear me speak at all.  So there is still a lot of disbelief there, however if someone is asking, I will indeed share what I know about training, and life.

So what I shared with this group of fine young people were a few things.....

1.  Become singular minded in your goals.

This is such a big one.  People really never come to terms with just how important this is in regards to lifting and life.  Spreading yourself out too thin leaves everything and everyone in your circle, wanting.  It's the one "you have one ass so don't try to ride two horses" problem.

Everyone thinks that because their mom told them how beautiful/handsome they were, that they are going to be a fucking rockstar at everything.  I'm here to tell you that you will not be.  Fact.

This messes with a lot of folks heads because trying to become awesome at everything is generally what has been frustrating them the most.  They wonder why it is that progress has been negligible when they have been working plenty hard.

2.  Don't compare yourself to others.

I've written plenty about this.

3.  Believe in yourself, and be patient.

Again, written plenty about this.

However it was during the Q&A that I was asked a question that had nothing to do with training, and do to with battling.

Essentially it was "what would you tell a young person who is going through a really rough time in their life, and wasn't sure what to do."

I told the young lady that asked me this, that I would tell that young person that the present is never permanent.  That no matter how hard things seemed, that I promise things will change.  I recalled the story about how my girlfriend of three years up and left me one morning out of the blue, for another guy.  Her last words to me were...."bye, Paul."

I told her of the message I got from a young man last week who told me of his struggles in life, over simple things, and he worried how he would ever be a strong man if these minor things were giving him so many problems.

My response to him was "you get strong through these struggles.  These are the times that will mold you into the strong man you want to become.  Just let them make you better....not bitter."

I could tell this seemed to hit home with so many that I was speaking with, and that I had closed that gap I had worried about.  That we could all relate with these struggles....these battles.

Afterwards I got lots of pics with the awesome people there, and answered more training questions.  I think the most common question after was, "how do you set up your split for powerlifting."

I've been using the "zenith" for a while, which I will outline in the base building manual, however most often my training generally looks like this.......

That's about it.  That really covers everything.

After the club meeting we headed out to the evening show and watched our dude Rob win the over-40 light heavy weights, and narrowly miss taking the overall.  So Rob didn't get his pro card, however he told me at dinner "this was a night of many victories."

That people, is a great attitude, and one of the reasons that I respect Rob so much.  He could have sulked and whined or been downtrodden about the fact that he didn't get his pro card.  However he found all the ways that this contest represented victories for him.  It reminded me a lot of Ernie Lilliebridge Sr. telling me, after winning the best lifter award at the 2011 Nationals, but being upset that I failed to hit what I wanted, "you're always going to be chasing some number, Paul.  Enjoy these moments."

Rob was enjoying the moment in all of it's splendor.  That's what he CHOSE to do.  People always forget that they have a choice in these matters.  Rob could have chosen to find any and all of the negative aspects about the show.  He dieting for basically 6 months for that show.  He should have taken the overall.  He really got screwed in the light-heavy open division.  However, he CHOSE to be happy about his victories, and gave little thoughts to his "defeats" other than, "here's what I need to do, in order to get better."

That is a winning attitude.


Sunday morning at breakfast, I got to meet my other "online buddy" Cory Swede Burns.  Swede and I go back quite a few years now, and we've been support for each other through some rough spots.  We didn't get to spend as much time hanging out as we would have liked, but just like with Rob, being able to close that circle of friendship by meeting was just another feather in the cap that was this past weekend. 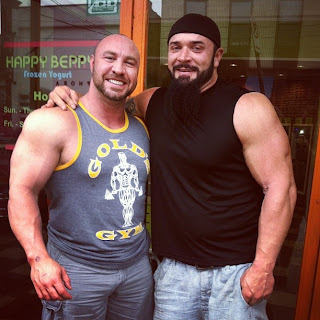 Sometimes it's hard to let go of your worries and battles, and really just tune in to the moment you're living in.  But when you let go of the worries, and loss, and grief, and really open yourself up to breathing in what life is trying to give you, you will indeed walk away blessed from those moments.

If you will let them, they will fill you up in a way that can carry you, and push out the demons we let storm the gates so easily, and hold them off for a while.  In a sense, it's the moments of happiness that also strengthen us; remind us that whatever ails us, or preys on our thoughts, isn't forever.  It's always temporal.

Every friend I met or spent time with this weekend, have struggles in their life.  We all do.  But during the time we were able to share in each others company, we let go of those things.  We put aside all of the angst that we generally allow to devour our happiness, and actually did something all of us talk about but don't always apply.