I'm not going to launch into the usual diatribe nonsense that has been written before, vilifying the flat bench press as a "worthless movement" or "terrible pec builder."  I've read of that shit from carbon copy writers and "gurus" for a few lifetimes.

I personally think the bench press, done correctly, is a great movement for building upperbody strength and mass.

I'm not writing this for "controversial" reasons either.  I have my beliefs on why pure novices shouldn't start out benching right away, and some reasons why I believe beginners should avoid the movement for at least a few months.

Almost everyone does this with benching in the beginning.  "What cha bench?" is the most common lifting question asked because well, we're a culture based around upperbody looks and strength.  Like it or not, that's a fact.  Otherwise no one would ever complain about people curling in the squat rack, or the 97 dudes that come into the gym that have jacked arms and chests, but no legs, glutes, back, or calves to speak of.


Beginners always bench way too much without off setting it by including enough pulling movements.  Eventually they get that "hands in my pocket" appearance.  You know what I'm talking about.  Their shoulders rotate forward so far that they end up with imaginary lat syndrome, and their palms end up in front of their thighs, almost as if their hands are in their pockets.

This is a great way to set the stage for injury down the road.  Some might say "well, that's from just too much pressing in general."  Possibly.  I don't know for certain however, because I've never seen a beginner male not obsessed with benching more.  I've never seen one that did an inordinate amount of back work to offset his benching, nor have I seen a beginner focus on the incline press or overhead work as the two main staples instead of the bench.

This goes without saying.  Most noobs aren't lucky enough to have a truly qualified expert to teach them how to bench properly.  The bench is actually a fairly complex lift to perform.  There's far more to it than just lying flat on the bench, and pressing.  Learning how to get tight, set up properly with scapular retraction, leg drive, elbow tuck/flare degree, wrists over elbows, etc all play a part in benching pressing properly, and safely.

So what usually happens is, ol boy learns how to bench from his brother or his buddy who has been lifting for 6 months and "suddenly got jacked".  So the blind ends up leading the blind right into irritated rotator cuffs, torn pecs, and sore shoulders.

This ends up happening because said lifter trains long enough to get some weight on the bar, in spite of how he is lifting, and won't change his technique later due to ego.

"Lifting any other way, I feel weak."  Well duh, that's because you've been training in this one putrid way for months.  So changing it, would feel awkward.

So they don't change.  Nevermind that if you take months and months to get to a certain strength level, but then get injured, that injury could set you back for the same amount of time it took to get strong, or longer.

This could probably fall under the technique issue however I wanted to address it separately because I feel it's almost epidemic like with young/new lifters.

When one noob is spotting the other noob, he has no idea how to really "spot".  I've seen this for years.  One guy is benching, and he eeks out that 8th rep that is REALLY fucking hard.  He doesn't rack the weight of course, because he's got a spotter.  And what is the job of a noob spotter in that situation?  To help you do 8 more reps, of course.

So ol spotter boy then proceeds to stick two fingers under the bar or, my favorite, when he puts his index finger and thumb around the bar in an "O" fashion, and pulls up with that fucking mess while the dude pressing shoves his crotch in the air.  Apparently forced reps also cause the bench itself to scald your ass, because every time I see a noob bench and do forced reps his ass juts right up off the bench. 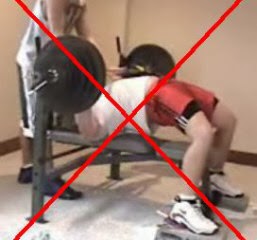 Noobs love them some forced reps, regardless if they are benching or spotting.  And they teach each other this is how you bench.  With forced rep after forced rep, of course using the dog shit technique mentioned above.

So now when you throw all of those things together, most noobs....

1.  Bench with too much volume, and too often
2.  Use shit technique
3.  And then make sure to drive home the fact they will be injured soon by doing a shit done of reps after failure.

So what would I have beginners do instead?

Incline is not a very difficult movement to learn, technically.  Essentially you do in fact lie down on the incline, unrack the bar, lower to the upper chest, and press.

There's not a lot of "setup" involved to be honest.  I do have scapular retraction on incline, but I don't have to worry about leg drive or a host of other things like I do on bench.  I can just focus on the pressing aspect of the movement.

I also believe that it has better carryover into the athletic field because you're pushing at an angle far close to say, drive blocking, like one would do in the NFL.

To borrow from Poliquin (because he worded this almost exactly like I would have):

The pressing angle of an incline bench press is more specific in terms of sporting movement due to the shoulder joint angle in relation to the trunk. Whether it is a punch delivered in boxing, the release of a shot put, or the push-off position in the short-track speed skating relay, you will notice that the upper arm is at a 45-degree angle upward in relation to the trunk.

With incline, a new lifter can just concentrate on pressing, and progressing.  Not having to figure out all the nuances of bench pressing properly.  So progressive overload can be at the forefront, rather than worrying about the technical aspects of the lift. 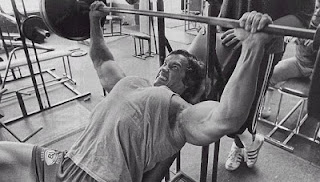 Also with incline, there's better carryover to other pressing movements in my opinion, because it's at an in between angle of flat and overhead.

After incline, I would have said noob do some overhead work.  I know that the "gold standard" is always to do military press (standing barbell press), however I personally do not have an elitist attitude about that shit, and I think that ALL forms of overhead pressing have merit.  Doing them standing won't make your cock huge or your vagina smell rosy.  I'm sorry that I had to be the one to break that news to you, but it's true.

Building shoulders is building shoulders.  Pressing shit overhead, seated or standing, barbell or dumbbells, is still pressing shit overhead.  All the god damn cock measuring about seated vs standing, is just that.  If you're building big ass shoulders, just do all of it.  Don't get fixated on JUST doing standing press, or JUST seated press.  Do both.  Be able to press a fuck ton overhead regardless of what implement implement you are trying to put there, or if seated or standing. 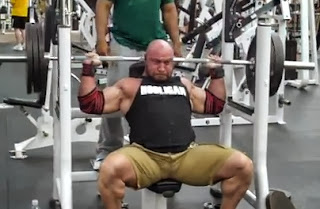 Lastly, I suggest noobs do flat dumbbell press --with a caveat.  The palms should be facing, and it should be a full range of motion.  Not that shit I see where you either don't lower it down all the way, or only press it back up half way.  Actually, it's not generally noobs I see doing that, it's some assbag trying to justify pressing that way by claiming it "puts more tension on the muscle."  Hey, reality check here bud, pressing through a full ROM still keeps tension on the muscle the whole time.  Jesus Christ, I still can't believe I read that shit.  It's like still reading from someone that you can only digest 30 grams of protein in a meal.

Where was I?  Oh yeah, palms facing and play with that a bit so that when you do go to flat barbell bench pressing, you will know what it feels like to press with a proper degree of elbow tuck.  I like dumbbell bench pressing for novice guys better for this reason.  Because when they do move to barbell benching, I can simply have them reference how their elbows move with the dumbbells, and almost immediately they bench with the proper elbow alignment. 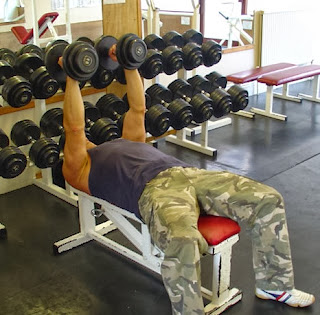 So what does one do after a few months of this, and they want to bench?  The beauty of this is, there will be a small foundation of strength already in place, and that will help the transition to benching.  The incline, overhead, and dumbbell benching will have put some things in place to at least setting up a good starting point for not developing bad habits early.  Strong shoulders, pecs, and proper elbow movement are a nice starting point for someone who then wants to incorporate the bench into their program.

When my training partner first started training with me, this is what I had her do, and when I finally introduced benching to her, she was strong enough and had enough muscle control, that I basically had to teach her nothing, and she benched very well.

If you never plan on competing in powerlifting, truth be told, you don't ever need to flat bench press.  However, most guys are going to be able to answer that age old question of, "how much ya bench?" at some point.  If a novice lifter is smart, and doesn't make all the usual noob mistakes, he won't have to answer that with "well I was benching X amount, but then I hurt my shoulder........"