Ode to Dozer - I love you buddy

Today I had to have my best dog ever put down.  My bullmastiff Dozer.  I had him for 10 years and he was so awesome that he came down with cancer during cancer awareness month.

I have so many awesome stories about Doz.

I drove 4 hours to pick him up as a puppy.  When I arrived the guy showed me his litter, which had been stricken with some kind of virus.  He had the meds from the vet, but told me he had another pup who was a bit older, but really good looking that I could have if I wanted.  He took me to a barn and opened the door and out ran this incredibly handsome guy.  I knew that was my guy.

We used to leave him at home or in a kennel when we went on vacation.  Everytime we did this he threw a fit in some way.

The first time we left him in a kennel, we brought his bed with him so he'd be comfy.  He loved that bed.  But he got so ticked off about being in a kennel that he tore it to pieces and pissed all over it.  Another time we left him at the house, and let the neighbor come check on him twice a day.  Upon returning from our trip, he walked into our bedroom in the middle of the night and took a giant shit on the floor.  Like "take that for leaving me here alone!"

So we decided to leave him at a friends house, so he'd have plenty of attention.  He proceeded to piss all over their house and then climb the wood pile in the back, jump over the fence and go MIA.  He was found at the dog catchers.  The guy working there was sitting on 24 hours and was going to take him home with him if no one came to claim him.  Thankfully the people we left him with called and picked his Shawshank escaping ass up.

After that we started taking him on vacation with us.  We even took him to a powerlifting meet once.  He took a shit in the hotel room while we were gone (you seeing a pattern here?) and kept sitting on my wifes luggage.  She was afraid he was going to shit on her luggage so we put him in the bathroom.  That night something woke us up and we opened the bathroom door to find him chattering his teeth so loud it could be heard through the walls.  The floor was tile and he was cold.

Once I grabbed some chocolate chip cookies and milk and sat them on the coffee table.  At that moment one of my girls got into something she wasn't supposed to and I went to get onto her.  After I sent her to her room I went to piss and heard him lapping something up.  I returned to the living room to find him drinking my glass of milk.  Apparently he needed it to wash down my chocolate chip cookies that he had just eaten.

He loved people and would lean on anyone that came in like "pet me pet me pet me!"  But he was VERY protective of my girls and if anyone tried to come into the fence he would go stark raving mad.  He could be scary as shit in those moments, and I loved it.  I knew he would give his life to protect my girls.  He loved them very much and would follow them all around the backyard, nearing getting to far from them.

The last year we got him a buddy.  A bull terrier named Buster and they played constantly.  Dozer would let Buster "win" most of the time when they played, but if Buster ever overstepped his bounds Dozer would still let him know who the "big dog" was.

It's going to take a long time to get over not having my doz-man around.  I have lived in this house for 11 years, and 10 of them had my big man in it.  When he was put down today I put my hand on his side and felt him take his last breaths.  I kissed his head and told him I loved him one last time.  I am forever thankful for the 10 years that my buddy was with me.

If you believe in dog heaven, then Dozer is in it, and I can tell you that it is improved by his presence there....

I love you Dozer, rest in peace. 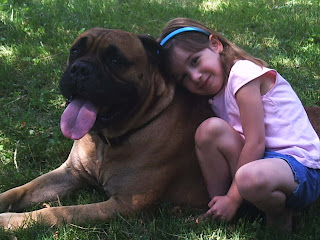