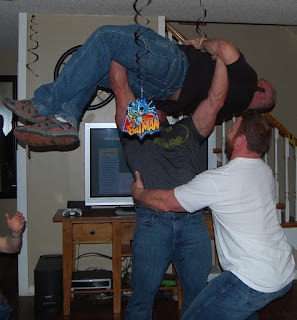 This past weekend was a joint birthday party between myself, and my good buddy Phil Stevens.  We planned this about a month ago and I knew after all of the "confirmed" invitations came in, that it would be a hell ride.  More than 30 people in my small house was going to be quite the affair.  I also knew that, because all my friends think I'm an alcoholic (that's sarcasm), I'd end up with more liquor AFTER the party that going into it.

As the party went on, one of the young ladies that came with Phil's group asked me what my overhead press was.  I told her it was around/over 300.  She asked me if I had pressed any people overhead.  I was perplexed by this question and thought she might be tricking me into something with witchcraft.

But she was serious.

So, after being shown how to do this properly (mainly by the person that is going to be pressed) the "people pressing" began.

I pressed my wife first.  Funny enough, she was the lightest adult I pressed but one of the most difficult because the person being pressed has to get very tight in the legs and clasp their arms together tightly, in order to make it as efficient as possible.  She did not do so.

After that, my buddy Jon pressed his wife but did so for 3 reps.  This irritated me.  I thought we were only doing singles.  So I then pressed our friend 4 times.  After that, I ended up pressing the female that started this whole pressing debauchery, for 10 reps.

I thought this was pretty much it, however about 15 minutes later, Phil came up to me and asked me if I was ready to press a man.

Phil is over 270 right now, and the biggest I've ever seen him.  I won't lie, I wasn't sure if I could press Phil.  It's a very awkward "lift" and pressing 275 on an evenly loaded barbell is not the same as pressing a floppy Phil.  Yes, that sounds terribly gay.

But we are men, and we're stupid.  So it had to happen.

In the pic it looks like my buddy Jon is holding me steady, however he was merely just playing "spotter" in case you know, I couldn't do this thing.

The clean was actually the hardest part.  Phil has to remain stiff (see, more gayness) so getting him into position was very, very difficult.  Though it doesn't really look like it on the video.

The press part was actually not that hard.  I think I might could have done a triple with him if I had known the press part wasn't going to be as hard as expected.  I'm not saying it was easy, because it was not, but a double was definitely doable.

Anyway, if you don't have LRB on Facebook (that's a link for it BTW), here is the side view vid of it.

Which brings me to the real training portion of this "Thoughts about..." section.

All of this very low intensity training stuff is still driving my lifts up quite nicely.  I was incredibly tired for that particular workout, but the 315 for 6 sets of 5 was still like speed sets, and that was after a very solid triple at 365.

Why I hadn't thought of this long ago, I have no clue.  The body doesn't run in a linear fashion when it comes to energy (sleep, food, stress, etc).  So why shouldn't be able to have contingency plans for when the body is "normal, "up", or "down".

I will be detailing this more in the next Base Building installment.

I'm off today and already running behind so that's it for today.  More on base building with varying intensities later this week and some info how I've been getting all of assistance work in.
Posted by Paul Carter at 7:13 AM