Helping the Freakshow get his freak back

A few months ago I trekked up to Dubuque, Iowa to attend the UPA meet there and give some support to my buddy Pete Rubish and meet my buddy Pam Bosko.

While I was there, I also got a chance to meet Marshall Johnson, aka The "Freakshow".  If you don't know who Marshall is well you only need to see him once in order to remember him.  It's hard to forget a 6'3" dude that's 280 with a pink mo-hawk covered in tats, piercings, and ladies underwear.  He's quite the fancy lad.

I'm just joking, he's not fancy at all.

But he really does wear ladies underwear. 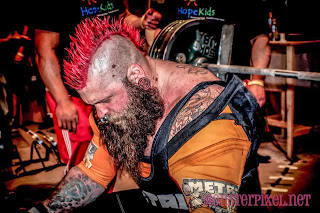 Anyway, for a guy as charismatic on the platform as Marshall you'd think his personalty would be bigger than life off of it.  However once we spoke I was completely let down, as Marshall is very soft spoken, and reserved.  So much so in fact, that when I was talking to him I had no idea if he giving me the brush off because of being intimidated by my good looks, or if he just didn't know how to talk to someone outside of Pam that had no tattoos.

Nevertheless, we talked about his lifting and he told me that he had been struggling with his deadlift.  That the confidence he had in it had waned for a while and he now felt unsure of his pull.  Especially once he got to 800 or more.  I told him that if I could ever help him out to let me know, and I'd do what I could.

Since Marshall ran away really fast after that, I thought for sure it was indeed my good looks that had intimidated him, and was the cause for his inability to speak at a discernible volume throughout the conversation.  So you can imagine my surprise a few weeks later when Marshall contacted me about helping him to get ready for the Night Of The Living Deadlift.

Since this was a deadlift only competition, I wanted Marshall to be able to concentrate on pulling.  To get his confidence back, and also to build a better base for pulling.  I'm talking about from a muscular perspective.  After talking to Marshall I realized that, like a lot of powerlifters, he hadn't really put in the work to build all the muscles involved in pulling.  Essentially, he hadn't done enough "bodybulding".

This is one reason why I don't care for "powerlifting gyms".  There is a clear lack of understanding behind building the body in most of these places.  Minimal equipment, too many bands, too many chains, too many boards.  When you look at how the most jacked dudes of powerlifting train, they all put in a significant amount of time building a physique.  Some guys eventually narrow down their assistance work to very little, however this is usually after years and years of putting in the work to build an overall body of work.  Guys substitute rows for "pull aparts".  No longer are chin ups done, it's all lat pulldowns, or even....god forbid...BAND pulldowns.  Why are you doing....nevermind.

Anyway, I basically had Marshall pulling twice a week.  Once heavy in his suit, and once light, from a deficit.  The rest of the week was essentially spent building his back and hams.  Barbell rows, t-bar rows, chest supported rows.  Chin ups, pulldowns, shrugs, and light good mornings.

The first week Marshall, I found out, was sore.  I know this, because he told me daily.

"I haven't been this sore in years."

"I'm really sore.  I mean I am having trouble getting out of bed."

Thankfully, it only lasted about a week or so.  He did ask me when it would stop, as he was starting to feel dead.  I told him that he'd acclimate, and that he'd have this bounce back that would make him feel very strong.  I'm not sure if he believed me or not, but when it happened, it was obvious.  The speed in his pulls increased significantly.  And no longer did I have to hear the incessant whining that was so prevalent early on.
The next problem arose when the heavier days started coming.  And Marshall's self doubt started to creep back in.  He told me he didn't understand why he was pulling with so much hesitation.  Why he was thinking so much about every little thing.

We examined his pull from before when he was pulling with confidence, and his pull now while he was struggling.   There were some obvious technical differences that jumped out at me.  Mainly, Marshall had flattened out his hips, so there was no leverage against the bar.  His shoulders were behind it now, and his hips were flat.  As soon as he would start to pull, his body would try to correct this by getting the hips higher and shoulders forward, however because he was starting in a mechanically disadvantaged position, there was less power output from the start.

You can read about HERE.

Eventually, all of the technical talk in the world fell flat.  Marshall had to just eventually walk up to the bar, and pull.  And when that light came back on, it all fell into place.

The last phase of all of this was simply....rest.  Marshall had never done well with understanding how to truly rest.  He, like a lot of lifters, feels like if he's not in the gym then he's losing ground.  He gets antsy.  But I insisted he take a full 10 days off before NOTLD.  He let me know during that 10 days that he was itching to lift.  This was good.  I wanted Marshall to be hungry when he hit the platform.  He told me in the past that he trained so hard for so long leading into meets, that often times by the time the meet rolled around he didn't have the "pop" in his lifts he wanted.  I wanted to make sure Marshall got his "pop" back.

When the day of the meet rolled around, I tried to watch the live steam to see how my buddy did.  However it never came up, and I didn't get to watch what happened.  So you can imagine my delight when I got a text, that Marshall hit 815....a PR, and his first PR in over a year, and went three for three on pulls.

I'm stupid proud of Marshall, and he shit he overcame from a lifting standpoint, to get this PR.  Marshall is an awesome dude, and wants more than anything to be the very best powerlifter he can be.  Even if he's afraid of my good looks and is a fancy lad, I am humbled and honored I got to be part of this journey with him, and help him find success on the platform again.

He also told me that this was the first pull he could remember in a long time, that was a near max pull that didn't cause him to shake.

"Everything just felt strong, top to bottom.  Like there were no weak points."

That's what all of that support work was for.

I know if he will crush (yes crush, god dammit) at Relentless, and he's already told me his goal for there.  I have no doubt he'll surpass it easily.