Look to those who struggle to find strength


If there is one thing I detest greatly on the internet in regards to talking about or sharing training ideas, it's the insinuation that because someone is stronger than you, that they know more than you.

"Well obviously it works for him because he can lift X amount and you can't."

These are the common calling cards of the unintelligent, and non-critical thinkers of the internet lifting work.

Being strong doesn't mean you have the ability to teach other people how to get strong, or even understand the most optimal way to do so.

It doesn't mean you know how to teach technique.  It doesn't mean you necessarily know a whole lot about training.  Like, how to program, or do much of anything besides move a heavily loaded barbell.  Essentially all the latter means is that you have great parents for moving heavy shit.  Which is awesome, however, that's ALL it means.

I mean, I've always been confused as to why people used Bob People's deadlifting routines or philosophies to study how to build a big deadlift. 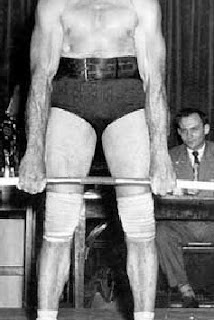 It's very likely that Bob isn't going to have a lot of insight to offer someone who has t-rex arms, and has to pull in a totally different fashion to get better at deadlifting.  Bob had an all time best in the bench of 300 pounds.  Whoop-tee fucking shit.  I know high school kids that could out bench him at a similar weight.  So Bob didn't pull in such a spectacular fashion because he discovered some secret deadlift training.  He pulled so well because he was flat out built for it.  So studying Bob Peoples deadlift training is an exercise in futility if you aren't built like him.

Vince Anello was once asked what made his deadlift go up the most.  His reply?  "Everything."

Notice any similarities between he and the pic above?

I've been around plenty of very strong guys that really don't know shit about how to train, or how to program.  They were strong in spite of what they did.  They would have gotten stronger doing almost anything.  Their efforts and training methodologies were not something to be modeled after, or copied by people who unfortunately, didn't get to play in the deep end of the "strength of body" gene pool.  In fact, many of them couldn't spell "methodologies", much less understand the need for it.

This still doesn't stop nut swingers from proclaiming that if their hero does something a certain way, that it is responsible for making them strong, and that no one can criticize it.  I wrote before, no one should be above criticism and no idol is infallible.

"Well these three guys are world champions/record holders...so they know what they are talking about."

There are plenty of athletes in every sport that excel at the highest of levels, and yet could never ever teach anyone else how to get better.  This is a fact.  Yet I always see someones accomplishments propped up as a reason that their ideas or teachings or way of training surely has merit.  And sometimes yes, it does.  And sometimes, no it doesn't.

Barry Sanders was one of the greatest, if not THE greatest running back of all time.  Yet Barry couldn't teach one single person in the entire world how to run, juke, and have vision like he did.  Despite the fact that he was a marvel, he couldn't teach what he could do.  It'd be a virtual impossibility.  This doesn't mean Barry had nothing to offer.  However there are without question, much better people (called professional coaches) to learn from, than Barry Sanders, in regards to learning how to play the running back position.

Someone has to be able to show that there is transferable application of their knowledge in order for their lifting ability to have merit in the "coaching" department.  In other words, just because a guy squats 800 pounds doesn't mean he knows how to teach people how to squat properly, or tell you what is wrong with your squat.  Nor does it mean the methods he used to get to an 800 pound squat will apply to you, if he was in fact built with great squatting leverages, and you are not.

Powerlifting, bodybuilding, and strength sports in general are going to offer very unique paths for anyone who ends up desiring to get involved in any of them.

Everyone will ultimately have their own unique journey and have to learn in their own way what does, and what does not apply to them getting better.

Now on the flip side, and this is not to be overlooked, you can't use weak people to make a point either.  I don't even know where you would start with that.

So what to look at?

I think a better place to start, is to look at people who took a long time to work up to an appreciable level in a lift they struggled with.

For example, when I spoke with Kirk Karwoski, I asked him way more about his deadlift training than his squatting.  Kirk was made to squat.  What's he gonna tell me?  But he was NOT built to pull big.  Yet he pulled 777 in competition, and over 800 for reps in the gym.  Kirk had tiny rat claws for hands.  So his grip was a big issue.  To rectify this, he did "Kirk Shrugs" where he did shrugs without straps, and pulled the bar up to about the belly button area.  So there was a bend in the arms.

Kirk also worked his technique so that he got his massive legs and hips more involved in the pull.  So when you watch Kirk pull, you will see him go almost into a full squat, then pull from there as his hips rise.

Vince Anello, the other great deadlifter mentioned above, was actually no slouch in the bench department, as he did a gym bench of 500 raw.

What did Vince do for his bench?

Benched twice a week, did a lot of bodybuilding style work afterwards.

A guy that pulled big and benched big naturally was Brad Gillingham.  However Brad's squat was always the lift was just a little bit behind those two.  So Brad kept working and experimenting until he found a method that worked to build his squat.

He talked about the entire evolution of both his squat and pull at Dragondoor.  It's a great read, and the article is here.   Well well, that looks like sub max style training....you don't say?

I've thought since my early years, when I was into bodybuilding, that the articles on how "Vince Taylor built his arms" were completely worthless because Vince said his arms grew naturally, no matter what he did.

Well what good is that to a guy that is struggling to build arm size?

Lifting is no different.  If you're at the shit end of the stick in terms of leverages for a lift, trying to pattern your training or approach after a guy that is on the royal end is most likely going to be an exercise in futility.

One of the things I believe I've noticed as well about guys that are more suited for a lift, is that they can perform it more often, and recover faster.  My theory is that it's generally because the energy expenditure for them on said lift is less than that of someone who is not suited for it.  Their ROM is reduced, and their body performs the lift with less overall stress.  I've known guys built for pulling that have literally gone in and pulled heavy twice in a day, with no ill effects.  Everyone knows that t-rex armed bench specialist that trains the bench three times a week, and has no problems.  But for guys that aren't built like them, this can often lead to getting fucked up if they try to model their training after them.

If you're struggling with a lift, and understand that you aren't built for it very well, don't look at guys who ARE built for it.  Find guys who got strong on those lifts that struggled to do so.  They will have a hell of a lot more to offer than a guy that can just thank mom and pop for his squat/bench/pull.