This morning was departure morning, i.e. "get the fuck out of bed really early, drive in the god damn rain, and be tired and hungry and thirsty and grouchy all day" morning.

I ate my casein pudding this morning, mixed with 4 ounces of water and a teaspoon of instant coffee.  You have to mush it with a spoon for a while, but the consistency becomes really nice, and it's actually quite delicious.

And by "delicious" I don't mean "it's delicious for a protein powder snack" I mean delicious as in, I can't wait to eat gobs of this after I get back home and figure out my offseason diet.  Yeah, it's really that good.  I bet a little peanut butter in it is going to be like crack was to Bobby Brown and ol' Whit. 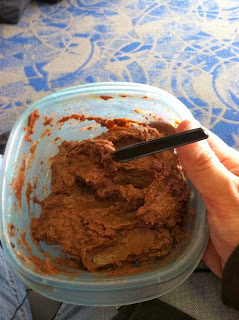 Anyway, I scarfed that down, got to the airport, checked my shit in and then had a "why?" moment when the guys loading my luggage asked me "do you have any locks on your luggage?"

"No....." I said, incredulously.  I couldn't quite figure out why he was asking me that.  I'd never been asked that before.

More on that later.

On my first flight, I sat next to one guy who wore a big bird yellow pocket tee and had two fucking magazines about stocks and the god damn stock market sitting on his fold out table.  You can imagine how interesting this asshat was.  By that I mean, he was not.  At all.  He said nary a word for almost two hours, and seemed incredibly incensed by me having to pee twice.  The second time I finally gave him a look of "don't make me cave your fucking face in right now...." and his haughty attitude cleared shortly after he did the same with his throat.

The guy on my right read a book, and seemed to be in a time warp.  I peered over quickly to see what page he was on, just out of sheer curiosity.

Ten minutes later I looked back over.

What was odd is that he never moved.  At all.  As if some estranged X-Man had come by and frozen him in that moment.  To be punished for all eternity by staring at page 130 of....whatever it was he was reading.

The second flight fared no better.  I was in the very back of the plane, where I hate to be....because here's the thing, WHY THE FUCKKKKK DOES IT TAKE SO LONG TO GET OFF THE PLANE?!?!?!!!

Seriously.  This is all you do.  Get a bag, walk the fuck off.  That's it.  I don't know what people are doing in the front of the plane that takes all afternoon.  Are there mai tai's and Hooter's girls serving wings at the end of every flight and the old men stuck at the front just can't bring their nearly viagra coma induced selves to find a way to get past it all?  Just can't walk off the plane?

After I finally got off the plane I made my way down to where the hotel shuttles are supposed to be.  So I waited.  And waited.  And finally called my hotel to send one.

"He should be there any minute."

When he did arrive, no apology for being 45 minutes late from a hotel that's less than 2 miles away (yes I could have taken a cab however....this is free).  No, he did not apologize.  In fact, he seemed UPSET that he had to pick me up!  OH YES!  What an inconvenience I am to his fucking daily job of you know, picking mother fuckers up at the airport.

I finally get to my hotel, open up luggage and grab my scale.  I wanted to see what my weight was doing.

Since there were people who were upset over my "naked selfie" (I wasn't naked for one, and two...it's the god damn internet.  Jesus Christ, you're upset over a "naked" mans torso????) here is one with jeans on....

After I weigh, I unpack and I notice I can't find my fucking zip lock bags of protein powder.  I clear my whole bag out, and there aren't in there.  Before you think "did you forget them?"  No I did not.  I stuffed them down between a lot of clothing to make sure they had some protection around them.  So now them asking me if my bag had a lock on it made sense.  They went through my shit, and took my bags of protein powder.  As if cocaine comes in vanilla and chocolate.  I mean for fucking serious.

So I got the hotel shuttle to pick me up (different person this time, thank God) and take me down to the Kroger.  There, I bought an assortment of goodies including the following........

Tomorrow between meals, I will snack on these things until eventually they are all gone.  The key is, not to bloat yourself up.  To eat constantly through the day, and minimize fat intake.  Some people will tell you to stuff yourself.  I found this to be very counterproductive.  You need to think about eating steadily all day.  Not trying to shovel as much food into your face as you can in one sitting.  Get tons of fluids in that can rehydrate the body.  Well, that's hard to do if the fluid is sitting in your gut because you just ate 42 slices of pizza.

So here I sit in this god damn hotel room, typing this...and waiting.  Just waiting on morning to come, so I can get on that scale and be done with it and then eat and drink and be happy again.