Standing vs Seated. And this has nothing to do with taking a piss.

Seems most weeks that I post up a pressing video, be that standing or seated, I get quite a few questions as to why I do one or the other, and which one I feel is superior, more manly, less awful, whatever.

If you are a "tl;dr" asshole, I'll save you the trouble right now of having to go any further, and give you the answer.

Mainly, do the one that you experience the best/fastest progress on, and that feels most natural.  Unless you are an aspiring strongman competitor and you need to actually do standing presses, pick the one you like best.  Why?  Because you'll do it the most, and progress on the fastest.

With that said, allow me a little preaching on this topic.

Regardless of what used to be said about me, my take on all training methodologies is to always use whatever is most beneficial to you being consistent.  DO NOT be dogmatic.

I personally HATE doing overhead work.  I think it's boring, and it offers no carryover to my bench or anything else I do.  I was always pretty good at it, and I don't need to train it much in order to progress.  I do however need to change movements, or create some serious goals in overheads or I will phase them out pretty quickly.  Because again, I hate them.

I can understand why strongmen need to love overhead work.  However for the life of me, I can't figure out why other people do.  I hate overhead pressing with the combined hate of all the black metal bands from Norway have for Christianity.  My hate blinds me to it.  Makes me cringe at the thought of having to do it.

However I do recognize the importance of doing it.  Having strong shoulders is a damn fine thing, and I don't think anyone ever said they got worse at something because their shoulders were "just too fucking strong".

Back to the question of, standing or seated, as I noted I think you should do both and figure out which variation you like best, or feels most natural to you.  Not the ones that people told you that you had to do, and if you didn't that you were unmanly.  Fuck that.  Do whichever one that you can crush shit on.

If you do movements because people told you that you have to do them, or that the other variations suck or are awful, you only short change the mental and physical information you can draw upon in terms of what they could be worth to you.  Basically, you miss out on experience.

Not only that, eventually frustration/stagnation will get the better of you and you'll either relent to sucking at that movement, or you'll drop it.

So everyone loves the fucking standing press.  You're not a god damn man if you don't do it.  Sitting down to press is akin to sitting down to pee.  Whatever.

So we don't need to defend doing standing presses.  So where does that leave the seated press, you ask?

I guess Kaz wasn't a fucking man either.  He only holds the unofficial world record in the seated press (however that was figured out) with 448 for a triple.  I hope someone lets him know he needs to turn in his man card for that shit.

Apparently Ed Coan is also a member of the man-card loss club.  As his staple overhead movement was indeed the seated press behind the neck.  If he didn't lose it then, then he certainly lost it when he told me I was good for 700.

So that's Kaz and Coan.  Arguably the two strongest fuckers ever, regardless of discipline, and they both did seated presses.  So somehow, they came to the conclusion that it was ok to do those, and weren't relegated to driving a pink mini-van shortly after performing that movement.

Dorian Yates spent most of his training career doing (brace yourself!) smith machine front presses, and seated dumbbell presses.  Unfortunately, after the IFBB found this out, they stripped him of all his Olympias and castrated him.  His nuts now sit atop Castle Grayskull in He-Man land where none of this shit matters.

Apparently, the Barbarian Brothers also loved the seated press behind the neck.  While they weren't powerlifters, they were known for pushing the limits of strength and development, and became well known for it. 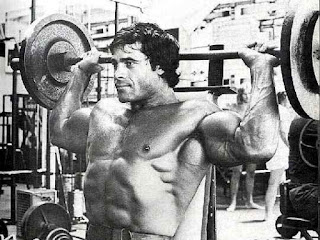 Point is, I don't need to get into all the various kinesiology justifications for one or the other.  I hate that shit. But I will tell you is this.  In my opinion the seated press "feels" like it's a better shoulder developer.  I can really "feel" my shoulders working when I do seated presses.  When I do standing presses, I am honestly thinking more about moving the weight through space.

So just to throw out some "science" with this, the EMG studies done also point to seated presses being a better shoulder developer than the standing versions.  From an anecdotal standpoint, I'd say that "seems" correct.  Whether that will be true for everyone I can't say.  Neither can an infinite amount of studies.

Mostly, I believe, they did both.  They also used the ones that they felt would make them better in the fastest manner.  They ignored the precepts that they had to do one or the other, lest they find themselves turned into a ken doll..........

My REAL advice, if you stayed with me this long, is to do ALL forms of overhead work, and just get fucking strong on all of them.  Period.  If you're like me, that involves creating various self imposed tricks and witchcraft in order to actually overhead press on a consistent basis.

If you aren't like me in that regard, then do what you like but keep an open mind about other variations of overhead work, that may be helpful to you in ways that a more closed off mind wouldn't imagine.