No, I didn't compete this weekend.  But I thought about it on a whim.  More on that later.

I went up to Dubuque, Iowa to support my buddy Pete Rubish who had been training (sort of) for this meet, and to meet my friend, and great lifter, Pam Bosko.

I've done Pete's programming for a few months now, and when Pete was actually eating food things were going marvelous.  Then Pete decided he wanted to do an MMA fight and try to cut all the way down to 198.    Needless to say, when you're doing MMA 3 hours a day on a keto strength gains are not going to be optimal.  Top that off with a case of the flu a little more than a week ago and well, there was pretty much no way Pete was going to hit what we had planned for him to hit months ago.

Pete showed up at 224, cut his 4 pounds and made weight at 220.  Since he hadn't lifted in a few weeks, we were not sure what we'd be looking to hit that day, and said we would play things by ear in warm ups.

Pam was also having to cut, so unfortunately she had to sit and watch me eat and drink while she had......air. 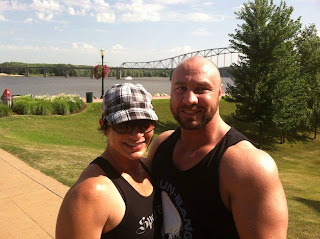 Pam was still quite delightful for someone who had not eaten or drank anything all day, and she took great joy in the fact that a fish fly landed right in my spinach dip as I was about to take a bite.  If you don't know what a fish fly is, they are disgusting little fucking bugs that swarm that area (apparently).  Normally, I would have just removed it, and continued eating, however for some reason these god damn bugs really grossed me out.  Pam laughed hysterically as I asked the waiter to remove it.  Upon reflection I really feel like he should have offered to take care of of that for me, since I didn't get to finish it, but I guess that's part of the risk of eating outside while surrounded by a cloud of fishfly.


That evening I went to eat with Pete and his dad, the Lilliebridge family, and Bill Carpenter and his family.  Bill is the head honcho at UPA, and runs these meets.  Just to get ahead of myself a little bit, it's an amazing venue.  You lift on a stage with a big screen behind it.  When squats are done and everyone has to wait on benching, they replay all the squats on the big screen.  It's really awesome because everyone knows that meets can be long and boring, but not in this case.  I wasn't aware of a single misload all day, and it may have been the smoothest meet I've ever attended.  I plan on doing a meet in this venue soon.

Pete opened with 500 on squats and said it felt good.  So we went to 551 for his second.  It too was pretty fast, so I called 611 for his third.  I think that was about as perfect of a call as I could have made, because if one of those god damn fishfly had landed on the bar, Pete might not get it.  Either way, good lift, and Pete was 3 for 3 on squats.

For bench, we opened at 280.  It was super easy, and Pete had hit 335 in training a few weeks before, however I really failed to take into account how much all the other factors came into play, and called for 330.  Pete missed it on his second and third, though it was much closer on his third than second.  Mostly because of his mental approach.  Pete definitely has a mental block when it comes to benching, but I think a whole offseason of working on his benching and building some confidence in it will rectify that.

I told Pete he needed to forget about the two bench misses, because his best lift was yet to come, and he needed to refocus.  Lots of times guys miss at meets, and aren't able to let go of the miss, and it mind fucks them right into the next lift.  You have to be able to put a miss or a bad lift behind you quickly in a meet, or that negative energy can carry right over and snowball the rest of the way.

Fortunately, Pete was able to do that.  He opened at 600 on pulls, then went 650, and 683.  A 7 for 9 day, which he had never come close to before, 1574 raw at 220, under shitty training conditions.  I was upset at myself for not picking 300 for his second attempt on bench, and know we could have gone 1600 or so if I had managed that a little better.  Either way, Pete seemed pleased with the day and I was happy for him and impressed with his efforts.  Regardless of all the videos you've seen of Pete, in person he's as mellow and subdued as anyone I've ever known.  Not only that, but he's genuine in character and who he is, and what he's about.  I will be working with Pete the whole offseason after his MMA fight in prep for RUM, and I have no doubt he can get close to 1900 @ 242, if not exceed it.  I'm excited about it. 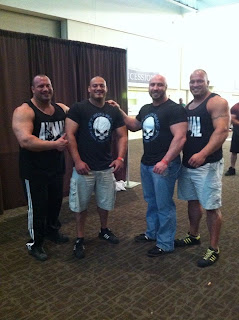 I'd like to give mega props to Ernie Lillirbdrige Jr. who had a nice day on a badly torn hamstring, and pulled a very easy 755 with it.  He told me it only hurt to set it down, and not to pull.  Either way, Ernie is the man and I have nothing but mad respect for him.  Great, great lifter and an even better man.

As usual, every time I see Eric Lilliebridge he wants to compare calves or arms or some bodypart.  Eric was even bigger now than he was in Chicago.  He said he was 283 but he looked every bit of 290.  Still, his calves are smaller than mine and it pisses him off to no end.  Especially since I do not really train mine, and he's been slaving away at his trying to catch up.

Saturday evening Ernie Lilliebridge Sr., a man I have tremendous respect for in every way, told me I should do the push/pull for Sunday.  I seriously thought about it, however I wanted to be able to leave by noon or shortly after to get home and see my training partner, who I hadn't seen in over a week since she was gone to camp.  Otherwise, I'm pretty sure I would have. 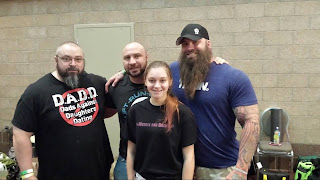 Pam lifted on Sunday, and went 3 for 3 on squats, hitting her goal of 347 on her third.  She missed her second and third bench (there is a pattern here!).  I left after her last bench and she texted me later to let me know she went 2 of 3 on pulls, and because her second was so easy, she actually jumped past her third planned attempt for an even bigger PR, but just missed it.  She still totaled 919 and won best lifter.  Huge congrats to Pammie for that.

As usual, it was great seeing the Lilliebridges, Pete, and finally Pam.  I also got to meet Marshall Johnson who had a 2500+ day, and is a very nice dude and incredibly personable.

Overall I had a great weekend, but I was mega happy to get home and see my training partner, and little ladies.  If you want to be part of a real special experience as a lifter, do one of these UPA meets.  It's an awesome time.