Trainsformers 3 - Jesus Christ this movie is still playing.  I'm serious, I didn't know this movie was like 150+ minutes and I put it on late.  Shia Labeouf was great in this.  Very funny and entertaining and probably the only character in the movie that wasn't completely wooden.  But there came a point, somewhere about 19 hours into this thing, that the survival rate just got straight the fuck out of hand.  I mean giant robots with weapons from the devil's asshole can take over the whole planet, but can't kill like 9 assholes running around Chicago?  It was just fucking absurd.

But I will say, Optimus Prime showing up at the end wrecking Decepticon mother fuckers was bad ass as hell, and worth the watch alone.  It's only about a minute clip but is there anything sweeter than when the good guy is pissed off all to shit and decides everyone is just going to fucking die?  Yeah, it was one of those scenes.

I still have the new X-Men sitting on my shelf to watch.

I think I may do another meet at some point but this time at 242, because this is the strongest I've ever been at this weight and the best I have felt.  I feel confident that I have gotten most of the kinks worked out and I think that 1750-1775 could be very doable at 242 beltless.  My guess is something like a 635-640 squat and 440 close grip bench.  The dead is obviously the key here.  But I've got some idea about that as well.   I am going to put together some block deadlift programming that I believe will be key.  I've been playing with the block and power rack pulls for a couple of months again now, and some as usual things are really beginning to jump out at me about how you can program this thing for direct gains to floor, and know where you are at.  More to come on that down the road.

Halloween weekend was fun.  I dressed up as a Roman soldier and the wife went as a Greek Goddess.  Also brought along my best bro Steve, and those two proceeded to get tanked while I played DD.  All in all, a good time with several good friends.  And is there anything funnier than watching a bar pack in full of people in ridiculous costumes?  Ate copious amounts of food (all healthy shit) and drank water.  Woke up yesterday feeling much better than the wife. 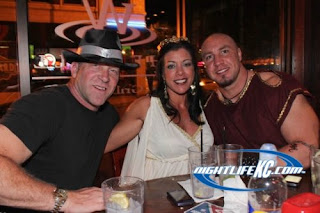 Season 2 of The Walking Dead has been nothing short of spectacular.  Already I have enjoyed it more than season 1.  Just seems......better.  I don't know why, but it does.  There, that's my take on it.

Dexter has been good as well, but not quite as great as the last few seasons in my opinion.  James Edward Almos to me, isn't a guy that is going to overly intrigue you.  Or he doesn't me anyway.  It's been hard for me to hate anyone this particular season, and I prefer it when I have someone to hate on during a show, so I look forward to them getting their upcommance.  Just getting feeling the rage this season.  Oh well.  It's still a fantastic show.  Just not as good as seasons past.  At least so far.

I did not buy that UFC card and shame on anyone that did.  Card looked bad on paper, heard it was just as bad.  I mean Crocop still gets a fight, and BJ Penn has been a has been for a while now.  If he fought Frankie Edgar 100 times he'd lose 105 of those.  GSP is still going to walk through Diaz.  I'm far more exciting for the Junior/Cain showdown in November.  That is going to be f'n epic.

I am addicted to those damn power pak puddings by MHP.  I break out the Jif Natural PB and then eat it together.  This has replaced my cottage cheese and peanut butter late night snack.


Hope everyone is having a GOOD Monday, bitches.
Posted by Paul Carter at 9:35 AM