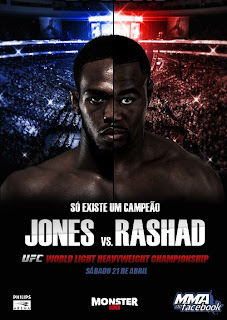 I don't really understand what even started the beef between these two. I feel like Rashaad kind of got jealous, and that perhaps this entire ordeal between them could have been solved by one of them changing weight classes. I suppose leaving one of the best, if not the best, coach and camps in the MMA game, accomplishes the same thing. I'm not knocking Rashaads choice here. The change in camps may help him, but sometimes, bumping heads is inevitable, especially when two people are in contention for the same belt.

I don't get why they couldn't just put their dukes up before. Marathon runners train together. Then guess what? They go race each other at the marathon. Rinse and repeat for lots of other sports, except for MMA of course, like it's bobsledding. I'm not saying Rashaad and Jones should have built bunk beds and re-enacted scenes from Rocky. Just don't make it so fucking dramatic. Brothers fight all the time.

I favor Jones in this match.

A big part of me just wants to get this card over with so UFC 146 can come. I am interested in seeing Thompson fight again, and of course, the main event, but feel like some other matches need to step up, win the bonuses, and make this card worth it.

I am looking forward to Stephen Thompson, aka Wonderboy and favor him over his opponent Matt Brown. I want to see more of those kicks.

The heavy-weights for UFC 146 were surprised with a UA at a press conference in Nevada. Nevada ain't playing around.

James Toney made some disparaging remarks about Rampage and also some other shit you can't understand. His speaking, if it were written instead, would be non legible. He sounds like he is speaking in wingdings.

Movies about fighting, mma, or fighters, seem to be exploding in volume. I should try to drag Paul onto the bandwagon and film a weightlifting documentary.

Joe Rogan and Dana White are going to continue to yell at us.

A gallery of awkward MMA photos.

Hendo will get the next shot at Light Heavyweight OR Middleweight.