Jesus Christ, this time change has kicked my ass!  I feel like I've been on a 4 day bender.  Tired as fuck and sluggish as hell.  Why don't they just leave it the fuck alone?  I hate the winter change when it gets dark after lunch.  That shit is dumb.  This shit where you can get the party started at 9 P.M. and the sun is still out rocks.

I remember the summer I spent in Oregon, shit it doesn't get dark there in the summer until like 2 in the morning. I'm exaggerating, but it I remember it seeming even later than usual when dusk would hit.

Peyton Manning is a slut.

My leg is infinitely better.  I have been stretching my piriformis every half hour.  I figured a few things out.

My right quad is not firing just right.  Seems to be my vastus medialis.  I know this because I can flex my left one hard, and my right one, well, not so hard.  This was reinforced on the 1 leg leg-extension when I could barely get 15 reps with a weight I was repping easily with my left leg.  But the piriformis is the real culprit here.  So I've been after that puppy with a purpose.

I received a shirt from professional penis pumper Jim Wendler this week.  Jim needs no god damn plugs or advertisement from me, so this is just a big thanks to J-Dub for being a friend and all the supportive he's given me for several years now.  I also realized after I looked at this pic, how much my back and traps have grown since I had the pic at the top of the blog taken.  In case you haven't been paying attention, the last three+ months were all geared towards trap and back training.  I think it worked.  I'm doing a whole chapter on bodypart specialization in the book.  I have really figured this shit out, I think.  If you have a bodypart that sucks mosquito nuts, I can fix it. 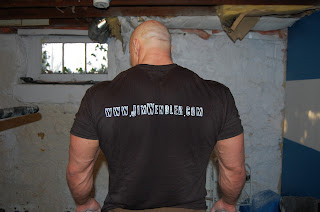 So I've seen quite a few recently.

Drive - Boy o boy.  Someone recommended this to me.  Starts off strong, and man I thought it just did a tailspin once it got going.  Spoilers - So the guy is basically a psychopath it turns out.  Not to mention, the whole quiet, not talking very much thing eventually got annoying.  You never knew if he was going to answer or not.  Leaving the money in a parking lot at the end, I mean, it makes no sense.  He could have at least dropped it off with the girl.  Or taken it.  Anything.  Also, nothing with the race car.  I mean that story went nowhere.  They had so many avenues to take this film into, and didn't really choose any.  There were just a ton of frayed story lines that never went anywhere.

Anyway, I ended up being neutral on it overall.  I didn't hate it nor love, I didn't like it or dislike it.  It was one of those where I was entertained but I thought it really missed the mark at the same time.  Pretty hard to do, so I must say I was impressed.  It felt kinda artsy to me in some ways as well.

My 5 year old says funnier shit than anyone I know.  The other day she walked into the hallway and stood there for a second, and randomly said "I hate being as tall as dad's butt."  She then walked into the living room and told my 13 year old "hey, that's awesome!" at whatever it was she was doing.  These random phrases come out quite often, and they are always comedy gold.

I'm watching all the episodes of Deadliest Warrior with my kids.  They love this show as much as I do.  See, just because you have girls doesn't mean they have to be all wimpy and shit.  My oldest will start fight training after this meet.

So I've added more real food back into my diet on training days.  I love sweet potatoes but I hate cooking them, and leaving in the fridge all week.  I dunno, they just get kinda nasty.  So what did I do?  Baby food.  It's just sweet potatoes.  $0.70 a jar and I put in a pack of splenda and it's great.  Here is how my diet looks on training days.

On non-training days I just take out the turkey burgers and sweet potatoes and go with a shake.  So basically, my shake diet, with or without MRP I don't care.  I can eat very little and stay at 240 pounds now.  Cardio tends to affect my weight the most.  The more I do, the leaner I get.  I drop it off a little, and I gain weight.  So I'm lucky enough that I don't have to change my diet much year round, just do less cardio to gain and more to get leaner.  That has it's pluses and minuses.  These diets will also be in the book.

I'm not naming the book RELOADED anymore.  I found out Layne Norton used that name, so I'd rather not be gay.

This may piss some people off, but I don't care.  Strong isn't deadlifting 800 with a 380 bench.  Ok?  It's also not benching 500 with a 500 deadlift, or the inability to do 5 chin ups.  If you are a perfectly leveraged mutant for a lift, good for you.  But there are equalizers in the field of strength.  I see so many guys pulling 750-800 now that look like they have never picked up a fucking weight that it's crazy.  Super long monkey arms that limit your natural ROM in the pull doesn't make you strong.  Your sub 400 bench proves that.  Jamie and I talked a little about this in our discussion.  You need to be strong at almost anything.  Not just the powerlifts or specialize in some random shit.  It just annoys me when I see some t-rex barrel chested guy benching 500+ or some monkey armed dufus pulling 800+ when both suck at everything else.  That's not strong.  Jim and I wrote up "what constitutes strong" for a reason.  There are equalizers.  Can you bench, incline, squat, overhead, deadlift, etc all tremendous amounts of weight?  Or are you just leveraged really well for one?  If you are, that's not your fault and you're just taking advantage of your gift.  I just get annoyed at people talking about how strong some guy is that is totally built for 1 lift, and ignore the fact that he sucks total balls in everything else.  I generally don't give a shit about this stuff, but I guess I got my man-period right now.   I never usually give a shit about this stuff.  I think my leg hurting is making me a grumpy bitch.

It was 85 today.  We had a total of 1 1/8 inches of snow ALL WINTER.  The least ever I believe.  The least since I've lived here anyway.  I wore cargo shorts most of all winter.  The only bad thing is, summer is going to be spanked baboon ass brutal.  Not looking forward to that unless I'm in the Caribbean somewhere.

My fight coach and I will be doing a seminar for women's weight training and diet strategies next month.  It will be at the Krav Maga warehouse/studio.  I will have more information on this soon in case anyone in the area would be interested in attending.
Posted by Paul Carter at 7:28 PM