So tonight if I can get the stars aligned correctly, I should be able to get in a podcast with the great Kirk Karwoski, who has been my favorite powerlifter for quite some time.  I've had a chance to talk with Kirk on the phone a few times now, and he's a really cool dude and much like myself, talks a lot.  Jim Steel said we'd get along famously and so far that's been the case.  I already have quite the list of questions lined up and I can tell you from the times we've spoken, it's going to be awesome.  If I don't get it done, it's because Kirk is in and out a lot, however it will happen.  So stay tuned.

On a dieting note, for those that are following 365 and doing the keto, let's be clear here.  Fried foods are not low carb.  I can't fucking believe I saw this shit more than once this week.  Several times I read or saw pics of fried dishes and people talking about "low carb meals" or "no carb meals".

Here is the nutritional info for Hooters chicken strips........ 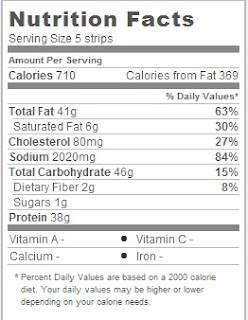 46 grams of carbs.  This is NOT low or no carb, obviously.  Most fried foods involved batter, which is full of bread crumbs and sometimes they even glaze the shit with sugar.  Anything slathered in bar-b-q sauce is out as well.  So I don't get why people think that ANY kind of meat is keto, because how it is prepared and cooked does matter.

Before you go spouting off about what a nutritional guru you are (which I am not, so I defer to John Meadows and Kiefer about this shit), you might to make sure that you actually know what you are talking about first.  Fried foods are not a keto food anymore than tootsie rolls or bread sticks from Olive Garden are.  A great way to approach keto is to shoot for zero carbs and you'll probably end up around the 20 grams per day range overall.

This vid of CT Flether has been making the rounds on the interwebs.  I really like this guy.  Mainly because he's obviously very stupid (he uses curse words, and I've read a lot lately that profanity obviously is a sign of low intelligence).  However, what jumps out at me about this WHOLE thing, is that he avoided steroids so he could say he was natural.  So what did he do instead?  Ate hims some MACDonalds, and got fat as shit.

20 years of 4 big macs, 4 fries, 2 shakes, and 4 apple pies at lunch.  Which put him in the ER too many times to count, and with major heart issues.

All to avoid steroids.

Let's do some MAFF!

6600 calories for lunch.  I'm not doing the macro breakdown but we should all know it probably doesn't look like what 6600 calories from chicken breast, grass fed beef, brown rice, oatmeal, and sweet potatoes looks like.

I think it's insane, how guys will do this to themselves personally.  Both with food, and drugs.  The natural guy will fuck himself up to the hilt health wise with food in the "offseason" like this, and the drug user will fuck himself up to the hilt with bigger cycle after bigger cycle because whatever it was he was taking obviously wasn't the answer.

On the flip side, some people want to be the best.  If sacrificing their health and well being means they have to do that, then so be it.  There was an article I read a while back about Jason Taylor, former defensive end for the Phins, and all the shit he went through while playing.  I linked it, however some quotes really jumped out at me.......

“Like a dungeon,” he says now. “One light bulb swaying back and forth. There was a damp, musty smell. It was like the basement in Pulp Fiction.”

The doctors handed him a towel. For his mouth. To keep him from biting his tongue. And to muffle his screaming.

“It is the worst ever,” he says. “By far. All the nerve endings in your feet.”

That wasn’t the ailment. No, that was the cure. A needle has to go in that foot, and there aren’t a lot of soft, friendly places for a big needle in a foot. That foot pain is there for a reason, of course. It is your body screaming to your brain for help. A warning. The needle mutes the screaming and the warning.

But the first shot to the foot wasn’t even the remedy. The first shot was just to numb the area … in preparation for the second shot, which was worse.
He won defensive player of the year that year, by the way.  Also let me add, I've had stitches in the bottom of my foot.  It was incredibly excruciating.

What I'm getting at here with both of these stories is, maybe you can be a champion, and maybe you can't.  Whatever endeavour you decide to undertake, genetics will be involved in playing a part in that.  However, the rest is determined by how much you are willing to give up and sacrifice.

That's your call.  Taylor says in that article, in the end it was worth it.  Good on him that he can feel that way.

CT doesn't really say if he felt like it was worth it, but he says that you don't really have any excuses for not making the minimum effort to get better.

The difference in the two stories about being the best is that, Taylor didn't choose for his feet to be fucked up.  CT chose to make decisions to fuck his health up.  So I do see a line between the two stories.  If you have extenuating circumstances that are completely out of your control that you have to make a choice to fight through, that isn't quite the same to me as making conscious choices that you will pay for later.  It's like being condomless while the not so "clean" hot chic is begging you to bang her.  You want to hit it, but you know you could pay for it later.

Again, it really all comes back to how badly you really want something, and the sacrifices you will have to make to attain it.  Life is going to be filled with these kinds of decisions, and in the end everything comes back to two very simple things.

#2 there will tell you everything you need to know about #1.