Have you ever been talking to someone, having a normal conversation and thought "what if I just punched them right in the grill right now?"  Why do we do that?

I don't know who recommended The Wire first, but it may end up going down as my most favorite show of all time.  The only thing is, I know that my favorite character gets killed and it pisses me off to no end.  Dammit.  But whoever it was that kept on me to see it, thank you very much!

I am looking forward to taking this week off.  I know that I've been at it too long without a break when I feel that way.  System was broken down, two injuries in a week.....that means layoff.  Pay attention to the signs.

Who strains a bicep BTW?  I know strongmen do sometimes, but seriously, who strains it doing chins besides my cursed ass?  I totally think it's antibiotics.  Everytime I've trained while taking em I get a pretty serious injury.  You'd think I'd stop after 2 but no, not me.  Not smart.

When I was a kid we used to do this game where you would tie empty milk jugs, oil quarts, and shit like that to a string.  Then we'd tie one end of it to a tree on one side of the road.  We would lay the jugs down on the side of the road, and walk the string across to the other side of the road and sit far off from the scene.  When a car would come we would pull that string and the jugs and shit would cross the road and stand up about 3 feet off the ground.  Man, I don't know that I've ever laughed so hard in my life as when we used to do that shit.  Never do this either.  It's dangerous.

When I was younger I smoked.  About 13 years old.  A neighbor taught me how to inhale and I went to my friends house to show him how to inhale as well.  We walked up to the store and bought two packs of Marlboro reds and went off to these mines to play "construction worker".  Every 5 minutes or so we'd "take a smoke break" and light up.  In about an hour we had smoked more than half a pack, and weren't feeling too good.

So we marched back to his house in the hot Mississippi sun, feeling like someone had kicked us in the gut.  Once we arrived I broke out the crackers and we started eating on them.  I remember thinking at the time that somehow crackers would cure our terrible nausea brought on by the nicotine overload.  Apparently it did work at the time because we didn't throw up.

I wasn't so lucky a few months later.

It was fourth of July and my dad dropped me off at the park to light fireworks with all the neighborhood kids.  I had brought a pack of Marlboro Light 100's and was showing off my black belt smoking skills to the amazement of all the other kids my age.  I was King Shit, smoking it up and throwing bottle rockets around.  After a while though, I realized that familiar feeling of smoking nausea coming on.  But it was more severe this time.  I began to feel very badly about myself and proceeded to walk home.  As I walked across this guys yard I noticed that the grass was wet, and I very much wanted to rub my face in the cool, wet grass because well, it seemed like a good idea at the time.

So there I was, rubbing my face in this guys fucking yard.  I won't lie, it felt good and made the sickness subside (can someone tell me why a cold wet rag on your neck makes that happen when you get sick?) for a bit.  Then I heard a familiar voice......

"What the hell are you doing son?"

It was my dad.  There he was in that damn giant ass Oldsmobile, riding around looking for me.

"Nothing, just laying down for a bit."

"Well come get your ass in the car." So I got in the car and upon entering the house I made my way yo the kitchen where I grabbed a big pot and headed to the bedroom.  I laid down on the bed and waited for the technecolor yawn to finally make an appearance, and oh how it did.  I threw up for quite some time.  Apparently nicotine in large doses when you aren't used to it is fairly harmful for the body.

I started smoking pretty heavily after that.  Heh.

We used to have BB gun wars when I was a kid.  Then guys started bringing pellet guns and rifles and c02 powered shit.  Damn those things hurt like hell.  We made a rule that you could only pump up the pellet gun with three pumps.  But without fail, the first time someone got shot, they'd get mad and you'd hear them in the woods somewhere, pumping away.  And you didn't want to be the mother fucker that got shot by that son of a bitch.  But someone would, and then someone would say they had overpumped, and then the fist fighting broke out.  God it was fun.

One day someone showed up with a .22 rifle, I shit you not.  I stopped going after that.

I met this guy one day while I was working on the farm.  We hit it off pretty well and he told me he was friends with this really good looking chic that he wanted to fix me up with.  I said hell no.  I was just a couple years removed from a long relationship and didn't want to date.  I was enjoying my solitude, playing music, lifting weights, and getting drunk periodically (every weekend).

But he insisted and called her.  She said no as well.  But then he told her I was a bodybuilder (everyone assumes that) and she said yes (obviously she was shallow).

So he picks me up to play chaperone for us and drives me to her house.  We pull into the long winding drive way and sitting on the tail gate of this small Toyota truck is this hot chic drinking a beer.

She hopped in and we cruised out to this local hole in the wall sports bar and decided to shoot some pool.  When I was younger I played in a lot of pool tournaments and was a halfway decent player.  So we go to play and she's just knocking the damn cue ball all over the table, not really hitting anything or doing much.  I'm taking it easy for the most part as I can tell that she really sucks.

So then she shoots the ball around and by happenstance, makes a ball.  She goes to take another shot and I ask what the hell she's doing.

"You didn't mean to make that one."

"Well, that's a shit shot then.  It should be obvious as to which one you're trying to make." I say.

So the argument goes on for a bit, and she puts up her bitch shield and I run the table.

Needless to say the rest of the date wasn't the epitome of romance and things were not going too well.  We stopped at Sonic, where we both ordered tater tots as the side.  Well I eat fast, and so I ate the tater tots.  She goes to digging in the bag and says...

"Who ate my tater tots?"

You see, the good people of sonic only gave us 1 order of tater tots, and well, I ate those.  But to a woman, they were hers.  So now I'm an even bigger asshole.  We drop her off at home later and my buddy proceeds to tell me "Well that didn't go so well."

No shit Sherlock.  Batman fights with Joker.  Water is wet.  Women have secrets.

Anyway, three months later I head out to this sports bar with my friend Josh.  We arrive earlier than usual and there's not many people in the bar.  This chic I had worlds worst date with is one of the few people there, and upon seeing me she doesn't walk over and kick me in the balls and spit in my face.  She waves and gives me a hug.  I was taken aback by this as we had both spread word that we had a severe disdain for each other.  But she appeared genuine happy to see me that night.  We talked for a while and she asked me if I wanted to head next door where the dance club was.  I said sure.

On the way there she told me she had forgotten her smokes and would be back after we got them.  Well, I thought (for some reason) that she was trying to give me the slip.  So I found this other girl and left with her.

To my surprise, I received a phone call the next day from the day that had originally fixed us up.  He tells me she has invited us over to a bar-b-q at her house.  I say no.  He says yes, and that he'll pick me up at 8.  On the way there he tells me that we need to stop and buy something to bring.

We arrive and there are quite a few people there.  All milling around the fenced in in-ground pool.  At the end of the patio is worlds largest bar-b-q grill with two pieces of chicken on it.  You see, she made this shit up to have a reason to invite me over.  I was impressed by this.

A few hours later everyone left, because they were hungry, and we left to get something to eat as well.

Life is funny.  Sixteen years later I am still with that girl and have three kids with her.  And she's been the most wonderful person I've ever known, and is more loved than anyone in my life.  I still think back at how crazy it is to think as we drive down that driveway that I never knew the girl sitting on the tailgate of that truck would be the person I'd spend the rest of my life with.  Life is crazy as shit sometimes. 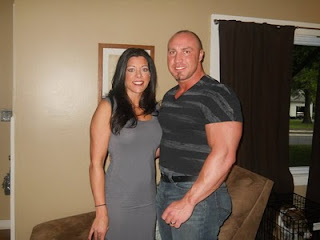